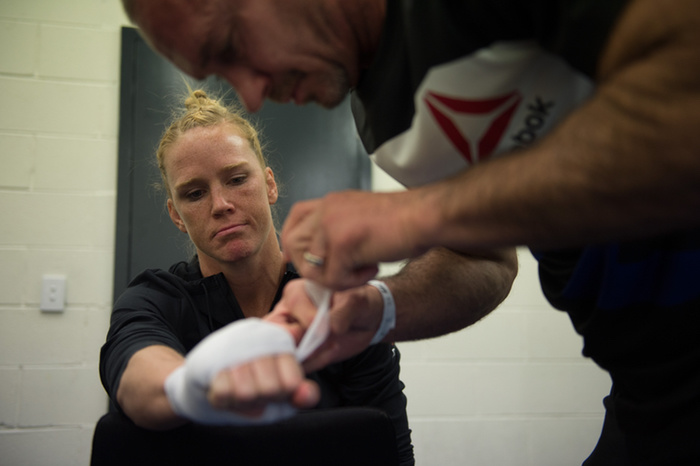 Last night on UFC Tonight, Daniel Cormier and Kenny Florian pushed Dana White to break some news and humoring the duo, the UFC president revealed that newly crowned bantamweight champion Holly Holm will take one fight prior to her second meeting with Ronda Rousey.

“Holly Holm will fight before she fights Ronda,” declared White, without commenting on a potential date or opponent for the champion’s next trip to the Octagon.

Although it seems like a pretty small revelation from White, it bears a stark contrast to what he said following Holm’s second round knockout of Rousey at the record-breaking UFC 193 in Melbourne.

Appearing on ESPN’s Mike and Mike on December 3 after the stunning head kick KO, the Bostonian claimed that he and Lorenzo Fertitta “should probably lose (their) promoters’ license” if they did not put on an immediate rematch between the latest 135 lbs women’s championship pairing.

“I think that if we didn’t make the rematch, me and Lorenzo should probably lose our promoters’ license. Yeah, that fight’s going to happen. I don’t know when, but that’s the fight that will happen. Ronda Rousey has gone undefeated, taken the sport to another level and was beating the best women in the world in 14 seconds or 30 seconds, so she deserves a rematch. Holly agrees she deserves a rematch, and we’ll figure it out.”

With Rousey’s superstardom bringing so many new eyes to the sport and after taking such a public and spectacular fall from grace at the hands of Holm, their rematch would almost certainly be the promotion’s most lucrative fight of 2016. From a business point-of-view, risking an injury to Holm or the loss of her title could have obvious implications going into a rematch with ‘Rowdy,’ especially when you consider that the promotion had unofficially scheduled the bout for their biggest marquee event of the year, UFC 200.

An avid competitor her whole life, Holm did her best not to reveal any disdain for being left on the shelf while Rousey got ready for their rematch when she appeared in a guest fighter capacity at UFC 194.

“I’d like to fight sooner rather than later, but never in my life have I said that I want to fight this person, at this time,” she said during her media scrum. “I don’t do that. So, I don’t like to wait eight months, but I’m not just going to sit here and demand anything different. If they give me something sooner then great, if they don’t then great.”

Speaking on her activity during her boxing years, holm underlined the fact that “eight months between fights is a long time.”

“Eight months between fights is a long time. Maybe not for some, but in boxing, I used to fight four times a year for title fights. I was very active. This year is three fights in a year and I still feel like it’s active. To go eight months without one, it’s like we’re not even averaging two a year at that rate. So it’s kind of like, oh man, that’s a really long time from now. I like to have that vision in front of me so it’s kind of hard when it’s a long way away.”

Holm claimed that the last time she had taken eight months off, the distance between UFC 193 and the rumored rematch at UFC 200, she had suffered two injuries during her time as a boxer.

“Honestly, the last time (I waited eight months for a fight) I had two injuries that I was coming off and I think it was about eight months. It seemed like forever. Averaging four fights a year is what my normal was in boxing, I had three fights last year, so eight months is a long time.

“We’re in this sport because we love to fight so when you don’t have a fight for a while it kind of takes away from what you’re shooting for, but whatever comes is what I’m going to deal with.”

With the unannounced bout almost set in place as a motivator, speculation is rife that it will be former UFC title contender Meisha Tate that will meet Holm. ‘Cupcake’ was famously overlooked as Rousey’s opponent for UFC 193 and even contemplated retirement after Holm was confirmed for the date.

A win for Tate if the two eventually meet could derail a lot of hype from Holm and Rousey’s rematch. Without the title that changed hands at UFC 193 in place, the fight would undoubtedly lose a bit of shine, but to put Tate in against Rousey for a third time instead of the only woman who has beaten her would not allow UFC to capitalize on the buzz that was created in Melbourne.

Tate has the potential to spoil the UFC’s party if they eventually meet, but speaking back in December, it was clear that Holm is taking her very seriously.

“Meisha Tate is a whole different fight than Ronda,” said Holm. “Every fight is different. I feel like she’s pretty well-rounded. She’s one of those scrappy fighters in every position so we would train completely different for it. I obviously, like always, feel like I can win. Otherwise, why would I be taking these fights? But with that comes a lot of hard work and you have to perform.”

Having just signed a new “multi-year extension” with UFC, the times are good for Holm. However, the biggest fight for her financially and terms of exposure is without a doubt against Rousey. If she defends the title in dominant fashion before their rematch, Holm will bolster her stock even further in the lead up to a second date with the former bantamweight queen.

Rousey Speaks! Says She Won't Drop Edmond but Would Retire After Another Loss to Holm