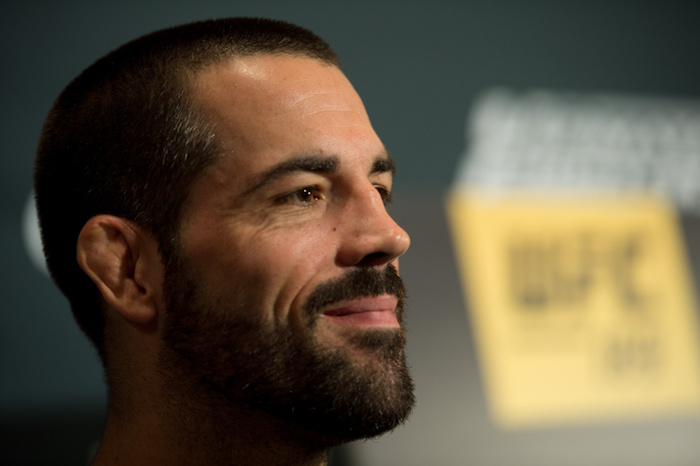 Maybe you read yesterday's chronology of UFC welterweight Matt Brown’s trip to Brazil for UFC 198—a chain of events that included flipping off his audience at the weigh-ins, fending off sucker punches during his walkout, getting choked by jiu jitsu ace Demian Maia, and getting sneaked in the hotel by his old coach. It sounded, generally, like an awful time. Then we caught up with Brown. To hear him tell it, even when crowds shouted for his death and took swipes at him, being in hostile territory wasn't so bad.

Fightland: This was your first time fighting in Brazil, and Brazilian crowds have cultivated a reputation for being belligerent to outsiders coming to fight Brazilians. After you were booked against Demian Maia, were you bracing for people telling you that you were going to die?
Matt Brown: Yeah, of course I expected it. And I embraced it. I knew this was stylistically a bad match-up for me, and the fact that it was in Brazil just made the challenge a little larger, a little tougher. Instead of taking it negatively, I turned it into a positive—"let's go enjoy this and embrace it and make it fuel my training and my mind." I think I did that. It just simply wasn’t enough to win the fight.

Do you prefer to have outside adversity when you're fighting?
I think every fight is its own entity—you can find good, bad, positive, and negative in any fight, and you can turn it, twist it, manipulate it the way you want to. Something I think I'm good at doing is taking something that, no matter what the situation is, turning it into a positive for me.

What day did you arrive in Brazil?
Sunday.

Leading up to the weigh-in, between Sunday and Friday, was everything cool between you and the locals in Curitiba? Were there other tense encounters ahead of time?
No, there wasn’t anything at all before that. I took lots of pictures, got lots of hugs, lots of positive vibes and energy. It was only at the weigh-ins and the fights that I got any negative feedback at all.

So when you were coming out for the weigh-ins and you see that sea of people, were you thinking "I'm gonna stir the pot and give these people the finger," or were you just responding to the moment?
I had no intentions whatsoever of any of that—it wasn’t choreographed in the least bit. The whole weigh-in thing was completely improvised. Of course I expected to be booed. I even expected in my head to hear the "you will die, uh vai morrer" crap. But then when I actually experienced it, I was like, "Fuck these motherfuckers," you know? It's one thing to hear it in my head and it's another thing to be there and feel it, when you can look at their faces. So I was like, "Fuck 'em."

The whole thing with turning my back to the crowd had nothing to do with Brazil. The original plan was that I was gonna take a selfie—just a social media thing we were doing it for our sponsor that we were going to post on their page. I thought getting a selfie with the crowd to my back was way cooler than a selfie with the ring girls or something. But then I got on the scale, and it just went from there. They were still chanting and I was just like, "Alright." There wasn't a single thought process involved.

Dana White tweeted about how he wasn't happy that you gave the finger. Did you have regrets about doing that after the fact?
I don’t know what Dana's feelings are on it—he didn’t say anything to me personally and I texted with him a little bit after the fight. But I don’t have any regrets. I responded to what they were saying to me: they were telling me I was gonna die. Anytime anybody ever says that to me in my life, I'll tell 'em to fuck off. I don’t regret that at all. 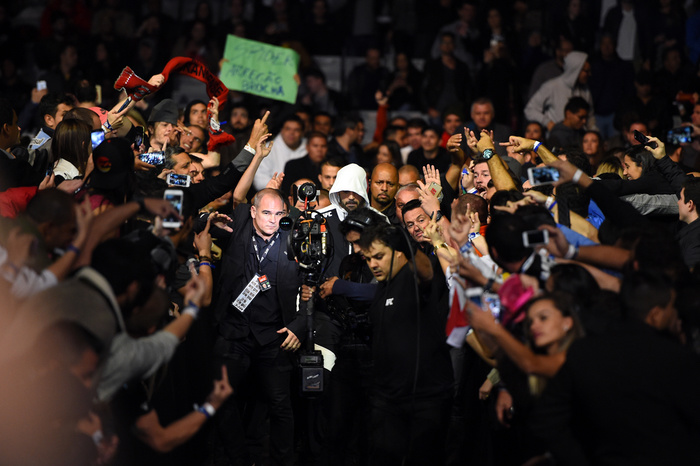 Walk me through what you remember of walking through the crowd on the way to the Octagon.
I got smacked a couple times. There's so many hands and so many people that I'm not really realizing that they're hitting me on purpose—to me, they're just reaching out. It's not like they hit me hard. These people are crazy, but whatever, my focus is on the fight. It didn’t affect me emotionally in the least bit. The one guy I retaliated back against, he actually grabbed me and pulled me toward him. That's just a natural, instinctual reaction—in my mind, in that little split second, what's going through my head is that maybe he's got a knife, maybe he's got a bottle, some sort of weapon. You have a fraction of a second to consider fight or flight. I'm walking out to a fight, so there's only gonna be one reaction.

In terms of the fight itself, everyone that fights Demian Maia has an idea of what they're preparing for, but his jiu jitsu can turn those preconceptions upside down. How did the fight differ from what you were expecting?
From him, I expected exactly what I got. He doesn’t try to make what he's going to do a secret—everybody knows what his game plan is gonna be. As for me, I'm not too disappointed in the fight: I felt great, I didn’t get tired, my muscles felt great, my lungs felt great. I stayed composed through the whole fight. In terms of all the things I game-planned for and focused on during camp, I did everything right except for a few technical mistakes—I made some errors in getting taken down and getting my back taken. I don’t normally take away much positive from a fight that I lost, especially one that I didn’t really get off much offense in, but this one I found a lot of positives in. Six years ago, I fought Ricardo Almeida, who's very similar to Maia, and I got dominated worse and lost in the second round. I could have made it to a decision, but with 30 seconds left I tried an escape that's a one in a million escape, but that's a better chance than I had of winning a decision. I felt really good in there and I had an opportunity for about 20 or 30 seconds in the third round, the chance to win the fight. I hate to use the word regret, but if there's anything I could go back and redo, it'd be that 30 seconds: instead of jumping on him when I hurt him, I'd let him back up and continue what I was doing. I stopped his takedowns and I'd finally found his timing for his takedowns. I had him where I wanted him, and I made the mistake of going into his game. I'm disappointed, but I don’t feel sad. I'm gonna be back in the gym later today maybe, and get right back in there.

What went down Sunday morning with your ex-coach, Rodrigo Botti? He came up behind you in the hotel lobby and punched you?
Not even the hotel lobby. I was sitting down drinking a cup of coffee, and he came from the side where I couldn’t see.

Was there any reason to expect that you'd get jumped?
Looking back on it, I should've been more aware. I'm kind of a paranoid guy—not paranoid, but extra safe. When I sit down at restaurants, I sit with my back against the wall so I can see the entrance and I can see what's going on, but that's generally when I'm with my family that I'm that careful. When I'm by myself, I don't pay as much attention.

The night before, I was sitting in the bar-restaurant downstairs and my back was turned. A guy came up to me and was like, "Hey man, sit over there." I'd just lost the fight and I was in a bad mood, I turned around and I was like, "What the fuck dude, leave me alone." And he said, "Trust me, I'm not trying to make problems, just sit over there." And I was thinking okay, these Brazilian fans are pretty crazy, maybe I'll just sit over there. I sat with my back to the wall. The guy comes back 10 to 15 minutes later and says, "Man, some guy is spying, trying to find a way to attack you—your old coach or something." I was like, what the fuck? What I'm getting at is he was looking for a way the night before. He'd been scheming this for fuckin' 12 hours at least.

So [Botti] punches me at the restaurant, we all go chase him—me, my two coaches, and [UFC official] Reed Harris. The guy sprints away, runs downstairs, there's like a folding glass door for the exit and it was locked, so he has to break the door to get through it. Reed runs through the glass door. Reed's a fuckin' gangster man—major props to him. I started to run at first and my coaches are kind of holding me back, like "No no no, you gotta stay back." So I went out a little bit slower, just to make sure there wasn’t a group out there waiting to jump me or something. I step outside finally. Along with a group of fans I found my friend from Brazil, who I didn’t even know was in the hotel at the time. He looks at me and says, "Man, what's going on?" I said this guy just punched me and ran off. His eyes lit up, he wants to help his friend, and he went on the chase also. It went down around the corner and the video pretty much picks up where all that left off.

Has there been any other three-day stretch in your life that was as crazy as this?
Man, I could think of some that were pretty close, honestly. But had I not lost the fight, this would have been a really awesome weekend. I enjoyed the whole thing. With all the chaos, it took my mind off the fact that I lost the fight a little bit. That's a positive thing: I come back with a story to tell outside of just, "I fuckin' lost and it was a boring fight." Normally no one would want to do an interview with me right now, and it's not like I'd be that interested in doing interviews anyways, because what would I say? It makes for a good story to tell.

Matt Brown and the Terrible, Horrible, No Good, Very Bad Weekend in Brazil