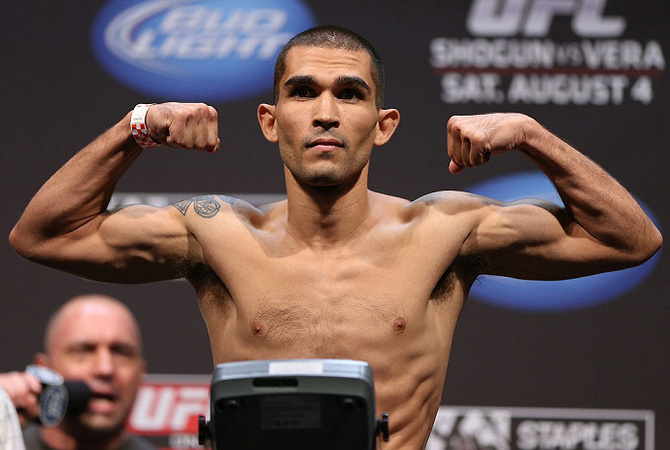 Ulysses Gomez is not only one of the members of the UFC’s inaugural flyweight class and a huge Justin Bieber fan, he's also the brother of Herculez Gomez, a striker with the USA men’s national soccer team and Club Santos Laguna in Mexico's Liga MX. Growing up in Los Angeles in a Mexican-American, soccer-mad household, Ulysses played soccer as well but gave it up to follow an interest in martial arts, an interest that led him from Tachi Palace Fights -- where he was champion -- to Bellator and now to the heady heights of the UFC. Meanwhile, Herculez is a genuine star in American and Mexican soccer circles, and he represented the USA in the 2010 FIFA World Cup. As Ulysses prepares for his next fight, in London on February 16th against Phil Harris, Fightland talked to the two brothers separately to discuss growing up, how they’ve each been so successful, and whether they could compete in the other’s sport.

Fightland: What was it like growing up together?
Ulysses Gomez: I think that me and my older brother are closer now than when we were younger, even though we live thousands of miles apart. He's 13 months older than me so we got in a few fights growing up, but I think that’s common with any siblings. In middle school it was all about soccer for us, but once we got to high school he stuck with soccer and I preferred lifting weights and practicing martial arts. I feel that us not doing the same sport has made us closer because we're not as competitive now. I root him on in whatever he does and I know he roots me on as well. Maybe it's because we’ve finally grown up.

Herculez Gomez: My childhood with Uly was a fun and pleasant one. We are 13 months apart in age, so we were basically always together. We fought a lot as kids - nothing crazy, just brothers being brothers. But it was great having him around. I think we both value that more now than back then.

What are your early soccer memories?
Ulysses: I remember spending every Saturday playing at the soccer field. We played for Neusport FC and (Herculez) played on the team that was older so we would stay at the soccer fields all day. I would play my match and he would play his game after mine. We also spent our Sundays at the soccer fields to watch my dad's team since he coached men's soccer. We would also watch the Mexican league on TV all day Sunday. My family lived and breathed the sport.

Herc was way better at soccer than me. I remember one day I came home and told my day that I scored, and I was super happy until my brother told my dad that he scored 10 goals in his game. They ended up winning 21-0.

Herculez: We both started playing at a young age. It was just part of our childhood. We would spend all day at the park playing; it was part of our weekend routine. He was a good player but just didn't stick with it. I think he just wanted something that was his, something he can call his own. He soon found that with MMA.

How do you feel about your brother's chosen sport?
Ulysses: I think soccer is one of the hardest sports in the world, especially in a competition sense. I mean, think about it: The World Cup is every four years and only one team gets to say that they’re the World Cup champions. On top of that, even making the World Cup team for any country is super difficult. They only take 23 players from each country! The odds of making the team are very slim.

Herculez: I have an enormous amount of respect and admiration for the sport of MMA. I have fond memories of my brother and I renting UFC videos as kids and watching them together with our dad. What I love (and also amazes me) is the amount of humility and respect the fighters have towards one another. That is rare to find with professional athletes these days.

How does the lifestyle of an MMA fighter differ from that of a soccer player?
Ulysses: I feel that his life is a lot more difficult than mine is. I mean, physically both of our careers are very hard to do. We both have to wake up early and put our body through a grind and watch what we eat. But I live at home with my wife and kids. I get to see my parents whenever I want. Herc lives in Mexico. He doesn't have his immediate family around him. Even when he had a girlfriend she lived in the States, so that's one of the reasons why I say his career is more difficult.

Herculez: That’s a tough question. I guess it would all depend on the athlete in question and the country. I play fútbol in Mexico and down here soccer is king above all else. But regardless, both have systems where you do your time before being thrust into the limelight.

How do you think you’d fare in each other’s sports?
Ulysses: Could I cut it? I mean I can get myself around a soccer field but I could never get to the level that my brother is on. He's been playing soccer for over 20 years so to get to that level is extremely difficult.

As for Herc fighting? [laughs] I don’t know, it depends on who he fights.

Herculez: I can’t lie to you; I respect and understand what it takes to perform at a high level, but I could never sit here and tell you that I could make it as an MMA fighter. It takes years and years to master a craft, and to be quite honest I am not fond of being punched in the face.

Could Ulysses be a footballer? I think both sports are very similar but at the same time very different. I don’t think Uly would enjoy all the running under the sun, so I am going to say maybe not.