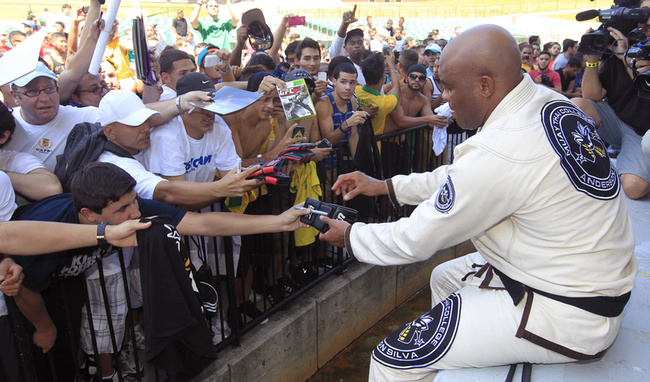 23 years away from Taekwondo, Anderson Silva has confirmed that he will be officially trying out for the 2106 Rio de Janeiro Brazilian Olympic squad as a heavyweight. Anderson’s main competition for the spot—which is one of four on top of the guaranteed four for the hose nation—is Guiherme Felix. Initially, Felix scoffed at the prospect of having Anderson Silva try out for the Olympics. Eventually, he wished Anderson luck.

Anderson has been training, and maintains a positive outlook on the opportunity: “I can’t be pessimistic nor can I think that I can just beat athletes who’ve had Olympic experience for a while. So I’m going to work, calmly, I’m going to do my part,” Spider said in a press conference in Brazil this week. “What’s motivating me is the challenge to be able to make a difference and motivate other people to do what they have in mind. As long as it’s for good.”

Guys I know that Iam completely out of form, as I haven't trained for manny years, but Iam trying, and because of that Iam working very hard to get the rhythm back and do my best, because if I don't do this, I will never know if I really can make it. I will train very hard like I always did and try to get a spot in the Olympics . Iam in another level, will need lots of work as the Olympic athletes are mainly super athletes , that are years ahead of everyone , but yes, I will leave my comfort zone and TRY!!! The worse that could happen is for me not to get a satisfactory result, but at least I will be sure that I tried!

The Brazilian Taekwondo federation will push Anderson Silva to gain some experience, the champion mixed martial arts fighter confirms that he needs to prepare to do so.

“I think that I’ll compete in 2015. I need to get ready. People can wait because I’m going to get ready to compete and do it properly, in a cool way. I train every day, now I need to train more specifically. Sleep with the racquets, awake with the racquets. Some eight hours of training a day so I can get some rhythm going."