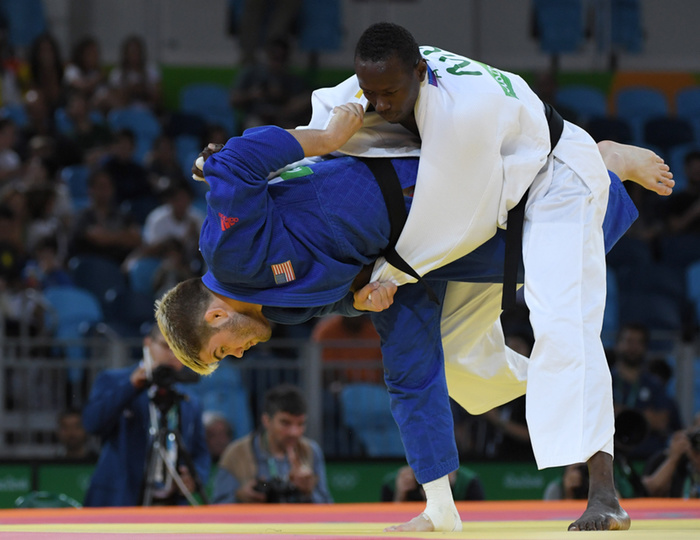 Four years ago at this time, American judoka Nick Delpopolo became both an Olympic punchline and punching bag. After placing 7th in the 73 kilogram division at the London games, he tested positive for marijuana and was disqualified.

Delpopolo’s fall from grace attracted a significant amount of attention for a couple of reasons. First of all, he was the first U.S. competitor to test positive at the 2012 edition of the Olympics. What really caught the Internet’s eye, though, was the then 23-year-old martial artist’s excuse: he’d unwittingly eaten a pot brownie at a pre-competition party.

“My positive test was caused by my inadvertent consumption of food that I did not realize had been baked with marijuana, before I left for the Olympic games,” the judo star explained in a statement that he issued after the disqualification. “I apologize to the U.S. Olympic Committee, to my teammates, and to my fans, and I am embarrassed by this mistake. I look forward to representing my country in the future and will re-dedicate myself to being the best judo athlete that I can be."

Like many famous pot-related excuses from “I was holding it for a friend” to “I didn’t inhale,” it somehow managed to sound potentially true and like utter bullshit at the same time.

The fallout ranged from sarcastic mockery (Deadspin called his statement “pretty much the lamest excuse ever” and proceeded to eviscerate his future prospects) to backhanded support (“He’ll always be known as the guy who flunked the drug test for pot brownies now,” a columnist for his hometown paper opined while arguing against the restrictions on marijuana). Sponsorship deals disappeared. Internet trolls attacked him. Friends, teammates, and even coaches turned their backs on him.

“I understand the anger—a lot of people live vicariously through the careers of famous athletes. I own up to my mistake and realize it was a stupid decision,” Delpopolo wrote in an essay about his experience for Vox last month. “Still, no one knows how much defeat hurts better than me. I blew my chance. I was the one getting all the backlash. I had my dreams stripped away from me—and I knew the rules going in.”

Although he admits to briefly considering retiring in that essay, Delpopolo remained committed to the promise that he made in his official statement. He has spent the past four years re-dedicated himself to judo, improving himself and fighting for his redemption.

“I didn’t want that moment on the biggest stage in our sport to define the rest of my legacy,” he told USA Today last week. “In the sport, out of the sport, people look on Google and that’s what they see. If I can medal at this Olympics, that will be what they see. That will be the exclamation point.”

His road to redemption has been, as USA Today put it, “something that seems out of a movie –he moved to a poor neighborhood in Opa-locka, Florida, loading up his three cats and his girlfriend in a UHaul to work with the one judo trainer, Evelio Garcia of the Budokan Judo Club, who stood by him after his positive test. Living in a dingy apartment, the couple lived some days off the dollar menu, Delpopolo training by running through the streets of his neighborhood, shirt off, a modern day Rocky getting ready for his shot at redemption. (Delpopolo says his neighbors, mostly of Cuban descent, rallied around him, as judo is popular in Cuba.)”

In amidst all of this soul-searching, dedication, drama, and inspiration, an interesting thing happened to the very rule that set the young athlete on his new path. As the New York Times reports, the threshold for cannabis allowed for in-competition athletes by the World Anti-Doping Agency at the time of Delpopolo’s positive test in 2012 was 15 nanograms per milliliter. The following year, the agency raised that limit to 150 nanograms per milliliter. The amount of cannabis in his system during the Olympics? 32 nanograms. Just a year later, his errant pot brownie experience would have been perfectly legal.

Although Delpopolo isn’t bitter, he is frustrated by other, more serious doping issues that he’s witnessing in his sport. Four members of the Russian judo team, for example, tested positive for a banned substance in competition this year and Delpopolo tells the New York Times that the International Judo Federation has approved all of them for competition. “I made a mistake, that’s something I have to live with,” he said. “But there are people who are knowingly cheating.”

Delpopolo took the first official step toward his Olympic redemption—and possibly toward some good old Cold War reenactment on the mats—earlier today when he won his first match to advance to the round of 16.

According to his profile in the New York Times, he no longer accepts baked goods from strangers or casual acquaintances.