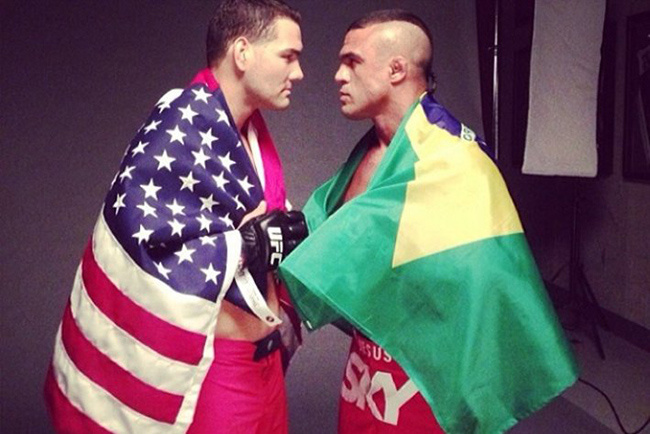 With all the pomp of the Academy Awards and twice the circumstance of the Emmys, the Fighters Only World MMA Awards were handed out this weekend in Las Vegas, Nevada, and just like those slightly better-known awards ceremonies, the event wasn’t without controversy. Though very much unlike those other ceremonies, whatever controversy did spring up has a very good chance of being settled for real. Argue all you want that Amy Adams should have beaten Anne Hataway for best supporting actress at last year’s Oscars, but you’ll wait in vain for any kind of confrontation that will ever clear up the dispute. Not so in mixed martial arts, though, which is yet another reason to love this crazy sport.

After the event on Friday, UFC middleweight No. 1 contender and Fighter of the Year nominee Vitor Belfort called middleweight champion Chris Weidman’s victory in that category “embarrassing.” "Not that it should've been me, but winning the award after just one fight? It's shameful,” Belfort told RadioBeat98. “[Weidman] won one fight; the other was [pretty much] accidental." When Belfort said, “Not that it should’ve been” him, of course he was saying that it should have been him, and he may have a point. Belfort fought and won three times in 2013, all against top 10 opponents and each with daring knockouts. Strictly by the numbers, only Urijah Faber (who won four fights in 2013) could claim to have had a better year.

Then again the Weidman supporters have a point, too. Though their guy may not have won as many fights as Belfort did, the two he did win were against Anderson Silva--the longest-standing champion in UFC history, the greatest ever, the true artist of mixed martial arts. Twice he went into the cage with the Man No One Beats and twice he walked out the winner, something no else in the UFC (not even Vitor Belfort, who lost ignobly to Silva back in 2011) can say. Vitor’s year may have had the better numbers, but in this world, and especially in the world of awards shows, drama counts, and maybe nothing in the history of MMA has been more dramatic that Weidman’s two victories over Anderson Silva--especially the one Belfort says Chris Wiedman won accidentally.

The delightful thing is that Belfort will get his chance, not just to claim the middleweight crown, but to shove it in the faces of anyone who voted for Chris Weidman and show them just how very wrong they were. Honestly, until I read Belfort’s comments, I didn’t realize fighters really cared about the World MMA Awards. They always just seem like a pleasant opportunity for people who spend most of their lives in sweaty gym shorts  getting punched in the head to get dressed up and interact with their fellow fighters without the fear of bodily harm. All awards shows by nature are ridiculous things and so I just figured the MMA awards were just a chance for a little genial détante in world built on antagonism and temporary malice.

But I guess some fighters can’t just shut off the well that easily. For Vitor Belfort, who’s been chasing a UFC belt forever, and who’s seen his two best opportunities (against Silva and then light heavyweight champion Jon Jones) kicked and squeezed into dust, the chip on his shoulder isn’t something that can be brushed off simply because he put on a tuxedo. Not even his Knockout of the Year trophy (for his spinning head kick win over Luke Rockhold) could placate him. His road to a UFC title, as so many roads to UFC titles do, starts with trash-talking. Weidman fired the first shot by criticizing Belfort’s use of testosterone replacement therapy, and Belfort responded by disparaging the MMA acumen of whoever it is that votes for the Fighters Only World MMA awards. His wasn’t just an attack on Chris Weidman but on anyone who could believe Chris Weidman had a better year than Vitor Belfort, by which he means anyone who thinks Chris Weidman is better than Vitor Belfort, by which he means anyone ridiculous enough to think Chris Weidman will beat Vitor Belfort when they fight in May.

As for us, though we didn’t win any of the journalism awards (congratulations to MMAFighting’s Ariel Helwani, friend of Fightland and, with his fifth straight win, now officially the John Larroquette of MMA journalism), we’d just like to say it’s an honor just to even almost possibly, though not quite, have been maybe considered momentarily for a nomination.