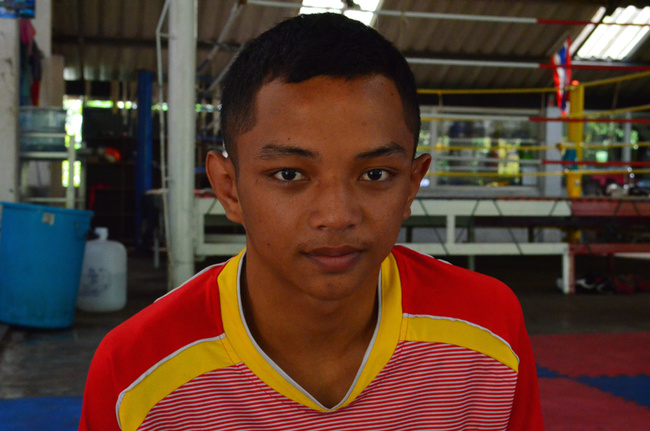 [Known by his fight name Penneung Singpatong, Yakob has competed in roughly 65 matches, mostly in the south of Thailand. He has been living and training full-time at Singpatong Gym, Phuket, since he was 12, sending part of his earnings back home to his family in the nearby province of Phatthalung. Now 16 years old, he's known among the Singpatong boys as the responsible one who looks after the younger fighters and volunteers to shepherd them on trips into town, especially when karaoke or soccer is involved. Most of his nights are spent hanging out with the other boys in their room at the gym, playing on his smartphone and talking to girls and friends at other gyms through Facebook. He takes pride in his appearance, though his boxer brothers have recently begun aggravating him by calling him "Alien."]

There are a lot of us fighters at this gym, maybe 20 or 30. I'm not sure, it always changes. Most of us stay in a big room. It's very crowded but I don't mind. Sometimes I get angry at the other boys but I'm happy to have them; they have helped me through some hard times. They were there for me during one of the hardest fights I've ever had. Well, it wasn't the fight that was hard, but what happened afterwards. When I think about all the fights I've ever had, this one stands out the clearest.

It happened about two years ago here in Patong when I was 14 years old. We left the gym to go to Sainamyen Stadium. Some of the other boxers from the gym were fighting that night, some came just to corner or help out. In the car on the way there, my Singpatong brothers told me they all thought I was going to win because they knew I'd been training hard. 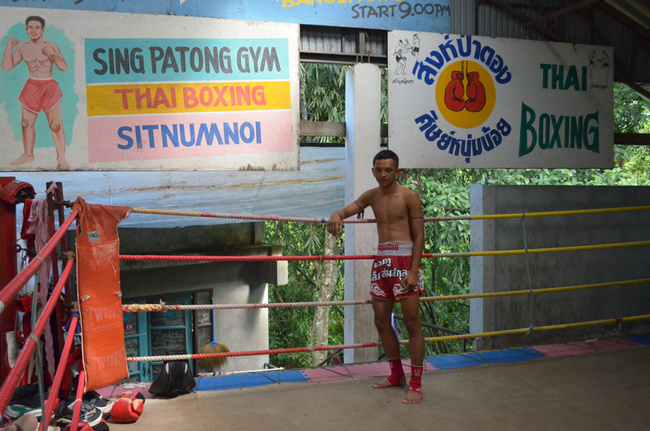 My opponent was a boy named Lek from another gym in Phuket. I knew who he was. We were something like friends. I had met him at Provincial Sports Day the year before. That's where all the schools in Phuket compete against each other in all these different sports for a day. He was nice when I met him and we became friends, added each other on Facebook. It didn't bother me to fight someone I knew personally. A lot of us have to fight our friends; you just get used to it.

The fight went very well for me. I knew I'd won the first round, I knew I'd won the second round, and the third, fourth, fifth. I felt it, I could tell I had won all five rounds. My coaches looked happy and I felt good about the fight.

Then the last bell rang. Lek and I came to the center of the ring. The referee stood between us and we faced the audience and I was so happy because I knew I'd won and it had been a good fight.

But then all of a sudden the referee raised my opponent's hand.

I couldn't believe it, I thought there must have been some kind of mistake. I looked over at Lek on the other side of the ref. He looked as confused as I felt. He went back to his corner and his gym cheered. Back in my corner, my trainers were angry and my teammates were talking fast to each other, trying to figure out how that had happened.

My trainer Mart pushed me backstage, started taking off my handwraps. I asked Mart how I could have lost. How could I have lost when it was so obvious to me that I had won the fight? Didn't he see it too? Didn't he think I was winning? He said he agreed with me, had no idea why I'd lost and that this was all wrong. 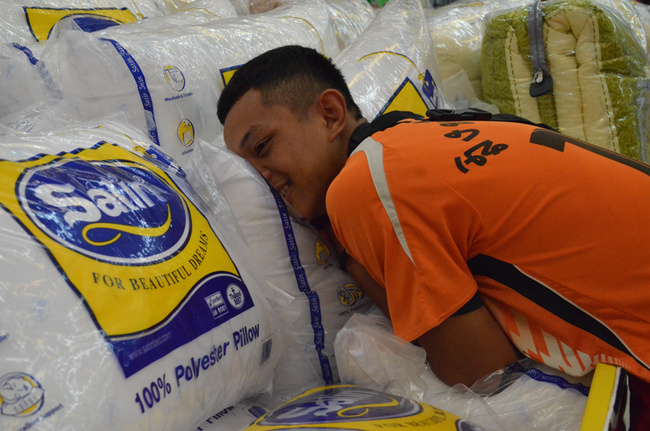 Testing out pillows on a shopping trip to Tesco's

Mart was getting angrier as he talked about it. He rushed over to the judges and started yelling at them during the next fighters' wai kru. He got in their faces, said I was cheated out of a win and asked how they could do that, what right did they have to misjudge a fight on purpose like that? Mart was furious and some of the judges were yelling back. Then Num came over to talk to them. He told Mart to calm down, just drop it. Mart was the head trainer at that time but Num was the owner of the gym, so Mart had to listen to him.

After Mart calmed down a little, he went up to the owner of the gym that my opponent Lek was from and asked for a rematch. They refused.

The next time I talked to Lek on Facebook, he told me he thought I should have won. He also said he was willing to fight me again but his gym said no. I asked if he knew what had happened, why he thought the judges awarded him the fight. He said he didn't know but had a feeling that something was wrong.

I know what was wrong: bribery. The other gym paid the judges off. 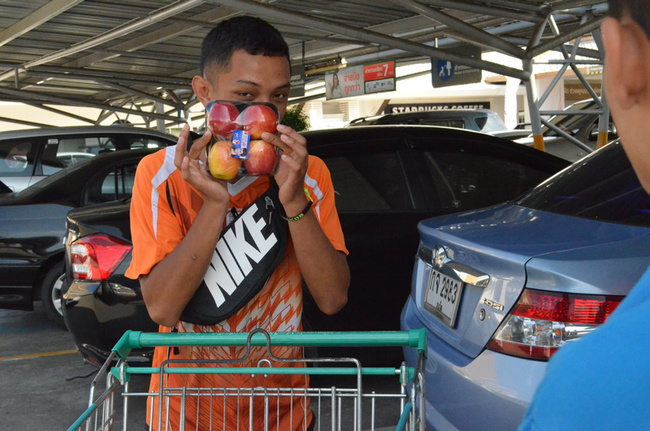 Buying supplies for the gym

That was the first time I lost a fight to corruption. My feelings changed after that, the way I think about judges, gym owners… I'm sure some judges won't take bribes, but some are so corrupt that they'll take anything they can get. They'll say anything if someone pays them off. It's illegal, but the regulations aren't good enough because this kind of thing happens all the time. That was the first time it happened to me, but I know so many other people who have experienced the same thing. It happens all over, no matter what gym you're from or what stadium you're fighting at. It's a big problem.

It won't change my goals, though. I still want to be a champion, keep fighting Muay Thai and earning money for my family. They work in the fishing industry in Phatthalung, where I'm originally from. I like earning money to help the family. Maybe what I need to do in the future is fight harder, make it even more obvious that I am leading in the fight. Just keep training hard, fighting hard, focusing.

That's what the other boys at Singpatong told me. When they saw me crying backstage after the fight, they came over and told me not to worry, kept saying it was just one fight. "You'll have more opportunities," they said. "There are always more fights." It really helped me to hear that, because I knew they were right. I told myself just to focus on training for the next fight.

I was still down about it, though. Back in our room at the gym, some of the boys came over and told me about how the same thing had happened to other people they knew. I was angry that this sort of thing happens to others, but it made me feel better to know I wasn't alone.

That's why I like living here with everyone. I have so many friends here and we're like a close family. We all train together, we all go to each other's fights. I like to watch my friends win their fights and get more successful, build a name for themselves and achieve their dreams. Seeing them do well in competition helps me too. It pushes me to work harder and be better in my training.

Sometimes we make fun of each other but we always look out for each other. The other boys here all know how afraid I am of geckos. I guess they think it's funny. Maybe it's hard to understand why I hate geckos so much, but it's because when I was five or six, I was playing on a tree and a gecko bit my pinky. I screamed and shook my hand but it wouldn't come off. I ran over to my father and he chopped off the body at the neck. That happened when I was a little kid, but they've freaked me out ever since. 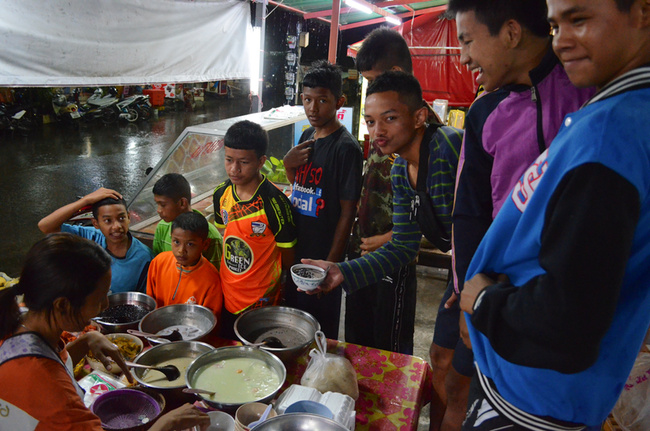 There are geckos in the rooms here at Singpatong. They come in through the windows or the cracks in the walls. It's awful, it's so scary. The worst was a few months ago when there was a blackout during dinner. We were eating in the gym when the lights went out, and I ran back to my room to get my cell phone. I couldn't turn on the lights, couldn't see anything, but I found my cell phone on the floor under one of the beds. It was still totally dark when I went to open the door again. I put my hand on the doorknob and I felt a gecko on it! I touched the gecko and it ran away and I couldn't see where it went and I just started screaming. I ran out of the room and back to the training area where the rest of the boys were sitting, waiting for the lights to come back on.

The other boys started laughing but a few of them went into the room with a flashlight. They found the gecko on the back of the door and used a stick to scare it outside.

They came outside where I was waiting and said, "It's okay, you can go back inside now. The gecko is gone. We took care of it for you."

I hardly ever see geckos in our room anymore. I think my friends make sure to scare them away before I see them.

The Ghost World of Muay Thai