Wait, There Was a Legal MMA Fight in New York? 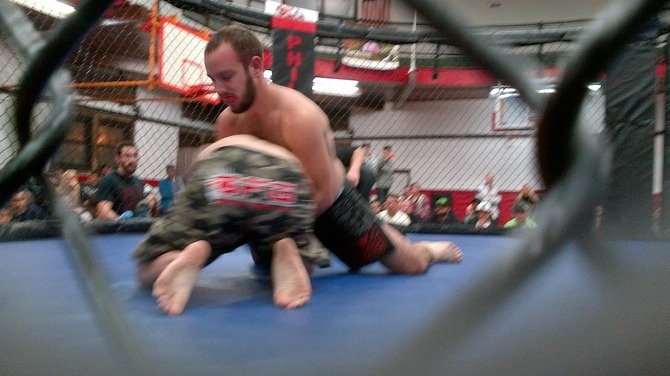 Promoters had advertised the inaugural Elite Cage Challenge on Nov. 17 as Westchester County’s first cage-fighting show, and a “chance to watch some of the best fighters in the tri-county area.” But no superlatives were needed: For New Yorkers like myself, any chance to see MMA in your home state is a chance you have to jump on.

In 1997, New York passed a law banning professional mixed martial arts, leaving fans on their own. Want to see a wrestler take on a jiu-jitsu practitioner or a kickboxer take on a karate master? “Too bad,” was the state’s official stance, “you’ll either have to go the underground route (which we don’t and can’t and won’t recommend) or get your thrills elsewhere.”

Of course, MMA has evolved since the late Nineties and become sanctioned in nearly every other state. New York remains one of the last holdouts, and each year the bill to repeal the ban gets closer and closer to becoming law. But while pro MMA remains banned, a lawsuit filed by Zuffa (the company that owns the Ultimate Fighting Championship) against the state for failing to sanction the sport forced authorities to admit that amateur MMA is legally fine and dandy. Too bad no one really knows exactly what “amateur MMA” means.

The Elite Cage Challenge is further proof that New York really doesn’t know what it wants when it comes to mixed martial arts --- it's a confusion of shifting rules and regulations. When I get to the venue – a YMCA in Yonkers – and make my way to the gymnasium upstairs, a crowd of mothers and fathers and siblings and friends are filing in, filling up the rows of metal folding chairs and chattering anxiously. Backstage, the fighters mill about, and though it’s an hour until fight time, some already have their hands wrapped – a sure sign of nerves. Tom, one of the event’s organizers, gather them to explain the rules. “You should be very excited,” he tells the fighters, most of whom have never  set foot in a cage or fought another human being in any legally sanctioned way. “After this event, New York’s going to be adopting the same amateur rules used in New Jersey.” Since 2006, the Garden State amateur circuit has employed rules that make for bouts best described as “MMA Light,” with short rounds and protective gear. But I still have no clue what’s in store tonight. Will Elite Cage Challenge’s competitors wear shin pads or headgear? Will they be allowed to kick to the head or pummel their opponents with ground and pound?

When a kid named Cody Hogan jumps in the ring early in the night and beats the hell out of a kid named Juliano Zanetti with punches, knees and a spinning backfist, and then relentlessly batters his face when they go to the ground, I have my answer. Aside from the three-minute rounds, the Elite Cage Challenge is full-fledged MMA fighting, with professional rules. For tonight at least, these men and women will be throwing down like they do on pay-per-view.

And they do. 175-pounder Diego Machado beats up his opponent quickly, ending their fight in 33 seconds with a flurry of fists. A bubbly young girl in pink shorts named Carolina Lopez gets dropped by a punch in the opening seconds of her bout, but she rallies and comes back to wither Jess O’Brien with punches of her own before the end of the first round. A tiny dude named Mike Lopez ties Steve Falcetti in knots before pounding him out.

While quick to shoot down prospective promoters looking to do pro shows, and keen on stamping out the “underground scourge,” the New York State Athletic Commission has long wavered on what is allowed when it comes to amateur events – which is why, in September, I hounded them for an official statement. NYSAC spokesman Edison Alba responded by email: “The New York State Athletic Commission has no regulatory authority over amateur events,” he wrote. “The Commission defers to local authorities with respect to whether such events comply with local statutes and ordinances.” Okay, but what does that mean?

Tom can’t help much either. “We’re working closely with the Commission to iron things out,” he tells me at cageside, approximating something like an explanation. In January, he’ll be helping to put together an amateur MMA event at a high school in the Bronx. All he’ll say is that its rules will be more stringent compared to tonight’s event. The one thing that is clear amidst all this regulatory murkiness: When New York starts defining rules for how an amateur MMA fight should go, thrilling "frontier" events like the Elite Cage Challenge will be a thing of the past.

In one of the last fights of the night, a sculpted behemoth named Greg Styles rushes Josh Santiago, gets behind him, and hoists him up and over his head in a suplex that would make a WWE pro wrestler weep with joy. Styles does this three times in quick succession, and each time Santiago comes crashing down on his head. The referee ends the fight after only 46 seconds, and it’s a while before Santiago regains his senses. Styles shouts, “Who’s the baddest?” as a dazed Santiago is helped to his feet.

More stringent rules? Oh well. At least we had tonight.