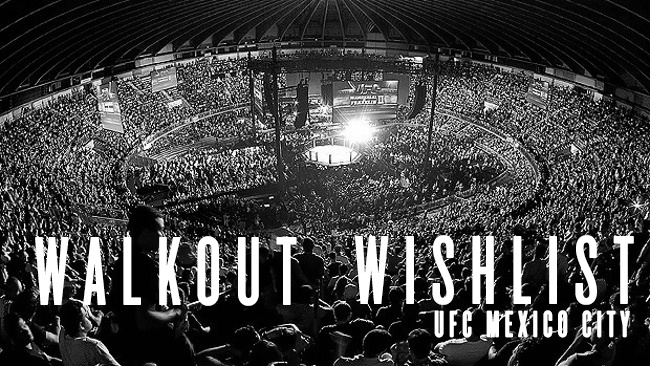 We got real bummed when Cain got hurt and couldn’t make it to the party. In honor of that, we put together some bangers that tiptoe that treacherous emo-hardcore-post-whatever genre. It’s an evocative night—it’s Mexico’s first UFC, Fabricio and Mark have become good friends—it’s just a night full of feels.

Fabricio is probably the smiliest dude in the entire heavyweight division. He's so god damn charming they put him on a Doritos bag. He and Mark Hunt together would be great in a buddy cop flick, you should probably take a look at all the things they’ve been saying about each other, playing spy in their hotel and singing Mexican folk songs together. It’s really like their Old Friends.

Mark said everyone’s Brazilian jiu jitsu goes out the fucking window when he lands a couple laser-aimed sluggers. Mark Hunt’s like an artillery unit all by himself I guess with all sorts of different calibers. This heavy hitting New Zealander just has to come out to Small Brown Bike’s “The Cannons and Tanks”.

Jake Ellenberger
Jazz June—"Death From Above"

No one should walk out to Coolio’s “Gangsta’s Paradise.” What valley of the shadow of death, bro? Shit’s more popping at a UFC fight than 4th of July in 1776. Come at your opponent like those very lights, Jake, from above—because Gastelum’s going to be expecting your wrestling more than anything.

Mini Cain is one of the most exciting dudes the UFC has showcased in years. This song sounds like being 23 and soaring high and quick. Lest he burn like Icarus, Kelvin’s going long.

Dennis Bermudez said he’s going to shut Conor McGregor down and run him out of the division. That’d be a show! Is that what goes down in Long Island? People get run out of town for talking shit? Let’s see how things go tomorrow with Bermudez, maybe McGregor will catch a bad case of the fear and the loathing.

Ricardo Lamas is Cuban-Mexican, which most likely makes for a really tenacious and fearsome demeanor in the Octagon. To celebrate a powerful and driven spirit, let’s give this man Cuba’s only hardcore band, Arrabio.

Dude. Tomorrow’s your chance to shine, to bring Mexico to the very top of the mixed martial arts world. Mañana, Dodger, is your day to pop off.