War Is Over: McGregor Confirms Positive Meeting With Dana and Lorenzo 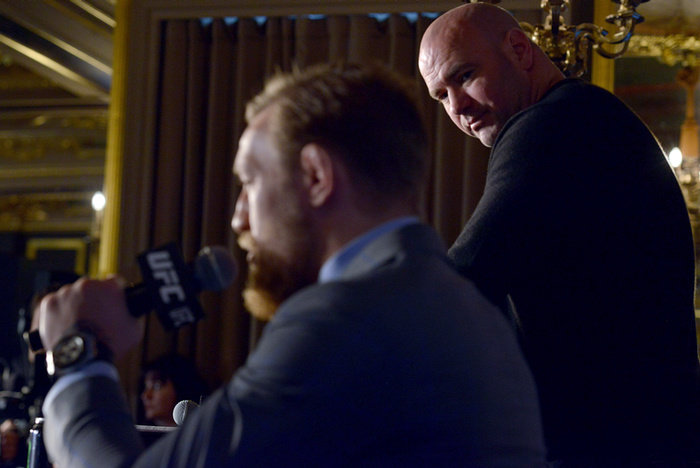 After a roller coaster month for UFC and Conor McGregor, ‘The Notorious’ met with Dana White and Lorenzo Feritta at the Montage Hotel in Beverly Hills, California on Wednesday night to talk about their plans moving forward.

Despite some reporting that their engagement was a “secret meeting”, someone from TMZ Sports was on the scene to get some footage of White, followed by a beaming McGregor, on their exit from the premises. Also present was McGregor’s manager, Audie Attar.

Following on from their meeting, McGregor sat down with Kenny Mayne to discuss what transpired over the dinner. In a snippet that Sportscenter released from an interview that will be broadcast on Sunday, ‘The Notorious’ pointed to a positive conversation he had with White and Fertitta.

“I met with Dana and Mr. Fertitta,” McGregor told Sportscenter. “We had a good conversation like it always is. We have a good relationship.”

In what appears to be an answer to a question relating to the fallout after McGregor refused to travel for the UFC 200 press conference, which resulted in his temporary retirement and the promotion pulling him from the marquee card, the Irishman claimed that all parties want to move forward from the situation.

“It is what it is,” he said. “This is the fight game. Sometimes emotions get into it, but it’s important to recognize that emotions have no place in business. That’s essentially what it was last night. We just set it aside. There’s no place for emotions in this. We are doing beautiful things; so let’s continue (to do beautiful things). Let’s fix it and continue.”

McGregor also stated that his relationship with the UFC brass was “in a good place.”

Asked if the situation between him and UFC was in a better place than it had been, McGregor answered affirmatively.

“Yeah, of course. Of course,” he told Mayne.

Both White and McGregor’s coach John Kavanagh have pointed to “UFC 201 or 202” as a potential date for when the featherweight champion will return to action. However, there has been nothing confirmed and speculation is rife regarding the circus that has been created by Floyd Mayweather’s intentions to put on a boxing bout pitting him against the outspoken mixed martial artist.

Just today, it was reported that Mayweather offered McGregor $50 million for a fight, and despite the legs the sensational story has, it just doesn’t seem possible at all.

I can completely understand why people are following up the Mayweather versus McGregor story. A crossover bout between the biggest name in boxing and the biggest name in mixed martial arts is an exciting prospect, despite it being a very unlikely one.

A lot of publications and fans are correlating everything McGregor does with the potential boxing bout with ‘Money’. When McGregor was taped by TMZ during a sparring session with Chris van Heerden at Box ‘N Burn in Brentwood, it solidified the idea that the featherweight champ was preparing for a pugilistic contest for a lot of people. McGregor has been sparring in boxing gyms ever since he emerged under the UFC banner and for many years before that, so there is nothing out of the ordinary about that.

One thing the vast majority of people didn’t pick up on was the fact that McGregor was sparring a southpaw. Hypothetically speaking, if McGregor was getting ready to fight one of the greatest proponents in the history of boxing, Mayweather, who is an orthodox fighter, why would he draft in the services of former IBO welterweight champion van Heerden, a southpaw?

Obviously, McGregor has a background in boxing, but if he were really preparing to fight Mayweather, the obsession he has with succeeding would definitely make him tailor a camp specifically to his style. The bare minimum that would be expected in that case would be orthodox sparring partners for the polarizing UFC star.

Guess who is a southpaw? Nate Diaz.

Diaz found McGregor on the end of his jab straight combination frequently during the second round of their main event fight at UFC 196. In the end, that sequence of shots led to McGregor shooting for a takedown, which eventually led to him succumbing to the rear naked choke of the Stockton native.

During his standoff with UFC, McGregor pointed to how “staring defeat in the face” had led to his choice of not traveling from Iceland to Vegas to take part in the promotional push for UFC 200. There is no doubt that McGregor wants to avenge that loss, and as he still holds the featherweight title, I expect that UFC will want to get a rematch with Diaz booked sooner rather than later so ‘The Notorious’ can get back to business at his old stomping ground at 145 lbs.

His Bluff Called, Conor McGregor Is off UFC 200 and Maybe Even out of New York