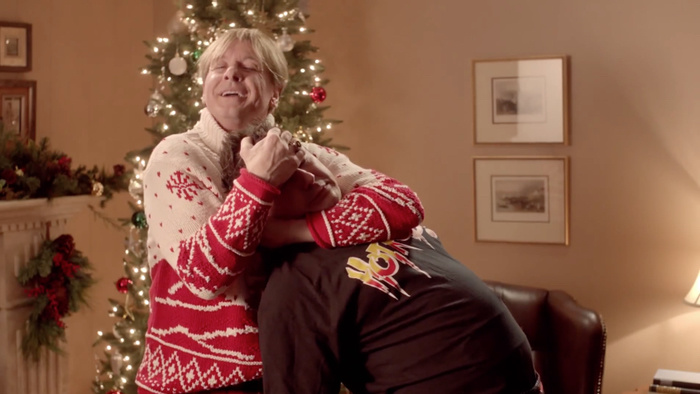 It’s no secret that certain members of the Fightland family are big Rowdy Roddy Piper fans.

The fact that he graciously bestowed his Rowdiness upon former UFC bantamweight champ “Rowdy” Ronda Rousey gave us our most obvious excuse to write about the dearly departed wrestling icon, but it went deeper than that. For many children of the eighties and early nineties, pro-wrestling, as choreographed and scripted as it was, was our first combat-related love, an MMA gateway drug of sorts, and even those of us who long ago left the squared circle for venues with more corners and fewer predetermined outcomes still maintained a fondness for the best villain in the game. When Roddy Piper, whose real name was Roderick Toombs, died of cardiac arrest at the age of 61 this past summer, tributes poured in from both the pro-wrestling and martial arts worlds.

So if you, like us, have been dreading your first holiday season without Hot Rod, here’s a little treat for you:

We recently dug up this ghost of Christmas past, a sweet if confusing carol that Piper and superfan Craig Lauzon released back in 2011. He also recorded some New Year’s resolutions around the same time.

Although Piper was primarily known as a professional wrestler and star of cult classics like They Live, he also dabbled in the music world occasionally over the course of his life. He played the bagpipes in Toronto pipe bands as a teenager. Old school rasslin’ legend Classy Freddie Blassie once sabotaged his pipes with wads of toilet paper when he was trying out for Vince McMahon Sr. He was a part of the then-WWF’s wildly successful The Wrestling Album, which recently marked its 30th anniversary. Vice Sports celebrated the occasion with an excellent oral history last month. “It went gold!” Piper told me when I asked him about the album, still seemingly stunned by the achievement, in an interview two years ago. “There’s some really great musicians that don’t have gold records!”

Roddy also had a UK-only single called “I’m Your Man” in 1992 and released a charity song called “Off the Top Rope” (with a B-side about Canadian hero Terry Fox) with Alan Snoddy and the Queen St. Band over the 2013 holiday season.

Piper’s “12 Days of Christmas” with the Number One Fan in the World of the Roddy Piper President Club Craig might not his most polished effort, but it’s a charming little ditty sure to keep us going through our first ever holiday season that’s all out of some ass kicking.

And if that’s not enough, we can always turn to Ebeneezer Piper’s A Christmas Carol from a 1985 episode of Tuesday Night Titans. Rod bless us, everyone.