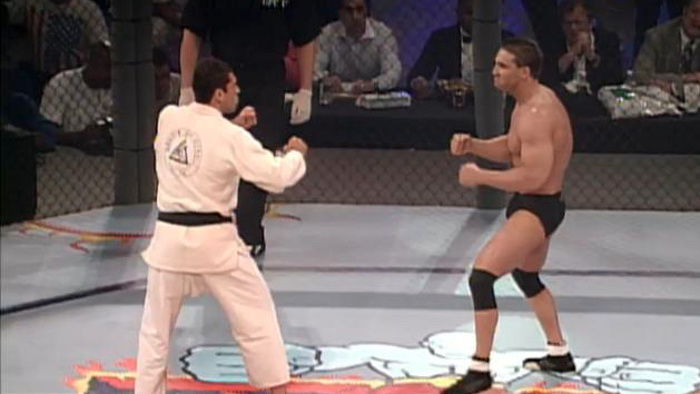 When Bellator MMA announced that Ken Shamrock and Royce Gracie would fight each other for a third time in Houston on February 19, just hearing their names in the same breath conjured images of a time when it was totally normal for the guy in the red corner to wear a gi and the guy in the blue corner to wear a speedo. A time when mixed martial arts (such as it was) had no rounds, judges, or time limits, when contestants entered the Octagon by way of answering ads in Black Belt magazine. Whether or not we actually saw them in action back then, we know Gracie and Shamrock are MMA pioneers. They are names that we recognize, and more than 20 years after their last fight, they are names that still evoke fond memories of yesterday.

But nothing threatens how we think about the past like revisiting its reality—especially when you actually watch what happened the last time Royce Gracie fought Ken Shamrock.

Seventeen months elapsed between Gracie's quick submission over Shamrock at the inaugural Ultimate Fighting Championship and their rematch four events later on April 7, 1995. The UFC's Darwinian tournaments failed to produce another fight between them, but Gracie and Shamrock had emerged as the biggest names of the single-digit UFC era: the former was the skinny grappler who killed the sacred cows of martial arts with chokes and joint locks, and the latter was the impossibly muscular archetype of the modern MMA fighter who could strike, wrestle, and submit. To capitalize on their fame, the UFC abandoned the brackets and pitted Gracie and Shamrock against one another in its first-ever, much-anticipated "superfight" at UFC 5. 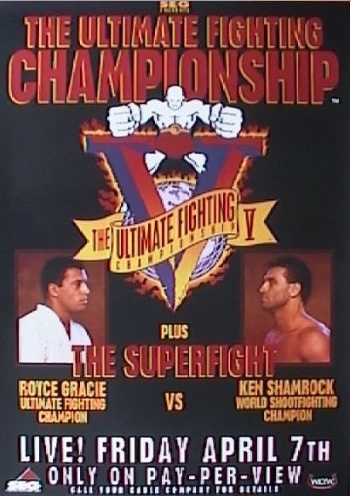 In hindsight, the fight itself is a 36-minute lesson in why instituting rounds, judges, and referee stand-ups were great ideas. After quickly taking the fight to the mat, Shamrock buries his head in Gracie's chest as the Brazilian clutches the sleeve of his kimono and holds the American in his guard. With a few changes in posture and a few inconsequential rabbit punches and heel kicks, this is the only thing that happens for longer than the length of a sitcom—no guard passes, no submission attempts, a true stalemate. When "Big" John McCarthy stands them up at the strange mark of 31 minutes and six seconds and the audience learns there's a five-minute overtime remaining, it's like a shitty bar band coming out for an encore, and the fighters quickly return to the same position. With no officials scoring the bout, the result of the longest fight in UFC history was a draw announced over a backdrop of boos. And why shouldn’t the audience jeer? The fighters were literally just sitting there.

Now, with Shamrock turning 52 years old and Gracie turning 49 before fight day, Bellator is running this one back, and there's no reason to get excited.

To be clear, Shamrock and Gracie deserve their recognition. Too often, we succumb to revisionist history and talk about how today's regional MMA champ would smash his way through the UFC 3 brackets without breaking a sweat. That's an apple-and-oranges comparison that ignores context: Gracie and Shamrock were two of the best fighters of their era. (Gracie's relatives lurking behind the curtain notwithstanding.) Through the subsequent generations that emulated and refined and strategized against what they did, the sport we know today was built on their backs.

And it isn't like the third fight lacks intrigue. Thanks to the athletic commission in Texas, Gracie-Shamrock III is slated to be an open-weight throwback, where a 180-pounder and a 200-plus-pounder can fight one another without the heavier guy forfeiting a percentage of his purse. It's a competitive match-up, too: Both fighters are of the same vintage, so this isn't a case of sacrificing the creaky old guard for the benefit of new blood. And watching two fighters from yesterday's MMA in an atmosphere that (presumably) will have time limits, ringside scorers, and conventional uniforms offers its own sort of novelty. Without the blind spots of the mid-1990s UFC rule set that enabled all that stalling, we might see an entirely different fight.

But different doesn’t necessarily mean good. The last two decades haven't been especially kind to either Gracie or Shamrock. Gracie fought only sporadically, taking on opponents in Japan—his marathon losing effort against Kazushi Sakuraba is its own superlative—before making an ignominious return to fighting on U.S. soil. In 2006, he looked helpless as the UFC's then-welterweight champion Matt Hughes manhandled him. In 2007—Gracie's most recent fight—he fought to a listless decision over Sakuraba, then tested positive for nandrolone, a particularly disheartening revelation considering the smaller-man-beats-the-bigger-man mantra in the Gracie Jiu-Jitsu sales pitch.

In 2009, Shamrock tested positive for performance enhancers as well, following a rare win that followed five straight first-round stoppage losses and a 4-10 record that stretched from 2000 to a temporary retirement in 2010. In his return this past June, Shamrock saw early success out-grappling Miami-street-fighter-turned-sometime-MMA-fighter Kimbo Slice—who fights his erstwhile bodyguard and South Florida rival Dhafir "Dada 5000" Harris on the February 19 undercard—before the tables turned and Shamrock left with his wig split and fending off allegations of fight-fixing.

The Slice-Shamrock match-up and Gracie-Shamrock III are both straight out of Bellator's new matchmaking playbook: by putting a spotlight on household names in a main event, it brings attention to the rest of the production. But while Slice-Shamrock had the built-in backstory of the promotion-torpedoing fight that never was, the precedent set by Gracie-Shamrock I and II offers no reason for a third go-round. A lightning-quick submission when no one watching knew what to expect, followed by a rematch that's too dull to watch? A few more decades of wear and tear on two fighters who look downright primitive compared to the sport we watch today? We're setting ourselves up for disappointment, and yet a lot of us—myself included, probably—will go ahead and watch anyway.

Before then, if you revisit Gracie-Shamrock II and you can keep your finger off the fast-forward button, you'll hear the commentators largely give Shamrock and Gracie the benefit of the doubt for their stalemate. In 1995, submission grappling was still so new and still so inscrutable that the announcing team (and probably the non-booing contingent in the audience) assumed there were subtleties to what the fighters were doing that they just couldn't comprehend. Sure, the clock ticked and ticked and it seemed like nothing was happening, but for 36 minutes, they waited patiently for a dull fight to get good. More than 20 years later, things don't look any more promising.

Kimbo Slice versus Ken Shamrock: Anatomy of a Fixed Fight

Metamoris III: What Really Happened Behind The Scenes