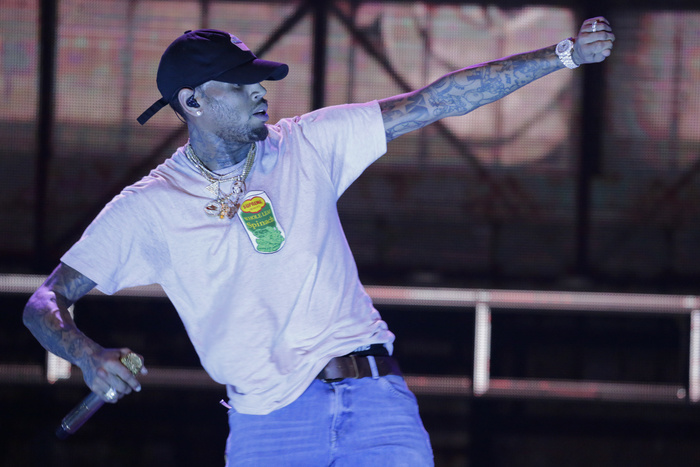 Chris Brown is back in the news again for yet another combat-adjacent reason. The singer and erstwhile Soulja Boy boxing opponent has a new single. And it’s named after something very near and dear to our hearts here at Fightland.

Brown is featured on “Jiu Jitsu,” the debut track by songwriter turned musical artist OneInThe4Rest, which dropped last week. Here’s what it sounds like:

Now the song isn’t necessarily bad. It’s a perfectly serviceable pop single written and performed by an artist who’s been personally mentored by the musical genius Raphael Saadiq, so of course it doesn’t suck.

We do, however, have some concerns about the track:

1. It isn’t actually about the martial art of Jiu-Jitsu at all.

The entirety of the martial arts-based lyrics in this song called “Jiu-Jitsu” are:

"'Jiu-Jitsu' was one of those in-the-moment creative vibes where I was playing off words. I need 'jiu' like 'jitsu,' just finding a metaphor,” OneInThe4Rest, aka Melvin Moore, recently told Billboard.

That said, some fans are already arguing that the connection runs just a bit deeper than that. “It’s a play on words,” Genius user tianaelizaann7 explains in an unreviewed notation on the site. ‘When you say ‘need you’ it sounds like ‘need jiu,’ and there’s no Jiu jijtsu without the Jiu also meaning that he needs her.”

2. As far as martial arts-related wordplay in songs goes, this isn’t nearly as good as the time I tried to write a song called “I’d Tap That.”

For the oft-threatened but sadly never produced “Jitz! The Musical,” that I created with my High School Musical-loving BJJ training partner in 2008. Really, though, isn’t the fact that tapping has multiple meanings woefully underexploited in music/everything?

3. It might be a better song than the other contenders for the Best Jiu-Jitsu Song crown, but it lacks the… um… je ne said quois of those previous hopefuls.

Sure, Brown might provide a better (musical) hook than Eddie Bravo, but is “I need Jiu like Jitsu” any match for:

“Gracie veterano, old family first, fam
Taught the world to swing that double edged sword, it works, fam
BJJ from GJJ, like Kool Herc gave birth to what your DJ plays
But despite the lineage I will never be closed-minded
Refuse to see beyond the lines? You go blind
Rakaa travels the Tenth Planet, I flow freeI welcome on any mats, gi to no-gi
Though my branch traces close to the original tree
Roots sprout from the original seed
Water with blood, sweat and tears, spotlight with sunlight
That tree became a forest, vale tudo, done right
Then Royce dominated them all in one night
And Rickson hasn't been beaten in one fight
Flow with the go, Rener, Ryron and Ralek know
That to continue to win you must continue to grow”

(Side note: while Never Read The Comments is a good policy in general and particularly on YouTube, user Radioactive Since 1990 does have a good point about this video when they ask: “Wait, so they broke into that building to...have a late night Jiu Jitsu party? They cut the lock with bolt cutters, does that mean they don't own this place? Why would you break into someone else's building to have a giant Jiu Jitsu party? Why not rent your own garage or something? Why is it so foggy inside? Why the secrecy, are Jiu Jitsu parties illegal or something? What the fuck is this.﻿”)

The repeated refrain of “A G in a Gi!” is easily the best use of the letter g and rhyming things with themselves since Gandhi and JFK teamed up for “G-Spot.”

As for the rest of the lyrics… well:

tl;dr: The intersection of music and Jiu-Jitsu rarely produces people who are incredibly skilled in both disciplines.

4. At some point, we might have to talk about Jiu-Jitsu’s flailing efforts as a musical muse.

Kung Fu has inspired everything from Carl Douglas’s “Kung Fu Fighting," to the entire Wu-Tang Clan oeuvre, to Kendrick Lamar’s Kung Fu Kenny persona. Is this really the best that Jiu-Jitsu can do?

I have neither the PR skills nor the flexible morals and relentless capitalistic thirst that could ever land me in charge of trying to rehabilitate the image of a public figure with an ongoing history of domestic abuse like Brown. But, if I were, I’m pretty sure that I’d say something like “Maybe we should shy away from threats of boxing matches with other musical artists and songs that reference combat sports when we’re trying to downplay your ongoing history of domestic abuse?”