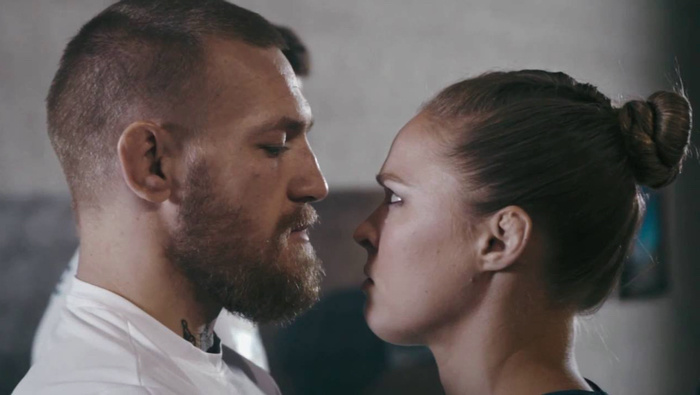 The UFC has become more and more reliant on the small number of superstars they have on their roster, the two most prominent being Conor McGregor and Ronda Rousey.

Internal UFC documents obtained by MMAJunkie recently showed that ‘The Notorious’ made up a quarter of the promotion’s PPV sales in 2015. The documents claimed that the Irishman was accountable for a total of 2.025 million buys over the calendar year, whereas Ronda Rousey took in 2.6 million buys over three events in the same year.

The documents also outlined that McGregor’s first bout with Diaz brought in a total of 1.3 million buys and that from between 2012 to 2015, McGregor and Rousey made up a comprised total of 56.1% of all pay-per-view buys.

It’s not a surprise that McGregor and Rousey are so important to the company, but seeing the figures in black and white forces you to beg the question—why has the promotion never endeavored to put their two biggest earners on one PPV card?

Of course, it makes sense to spread out your big attractions over a year. Yet, for banners like UFC 205, the promotion’s first visit to Madison Square Garden, or event a milestone like UFC 200, it makes sense to double down on McGregor and Rousey to give the sport an utterly unforgettable night.

This kind of blockbuster event has not been an option for the UFC since Rousey’s exodus from the sport following her brutal KO at the hands of Holly Holm way back at UFC 193. Rousey is set to return at UFC 207 where she will face Amanda Nunes for the bantamweight title, but that doesn’t mean she will be hanging around for too long.

If the UFC has ever fathomed the idea of putting McGregor and Rousey on the same card, they will be very aware that time might take the opportunity away based on Rousey’s recent revelation on Ellen.

When asked when she would consider hanging up her gloves, Rousey responded to the chat show host in an incredibly candid fashion.

“Not that long—I’m wrapping it up,” she replied. “This is definitely one of my last fights. The show can’t go on forever.”

There have also been growing rumors surrounding Conor McGregor’s future in the sport as countless reports have suggested that he will take a leave of absence for a year after his bout Alvarez (we talked about them at length last week).

Although Rousey put no exact date on when she would walk away from MMA, a loss at the hands of Nunes could force her hand.

As one of the biggest stars and most dominant champions the organization has ever seen, a two-fight slide would affect her brand, and with countless offers coming to the former champion from outside of the fight game, a loss could see her focus more on others options from Hollywood or elsewhere.

Should she win the belt back, based on her previous activity, she would look to compete twice in 2017. If McGregor follows through with his year on the sidelines, it could be next November before he is ready to fight again, which would make Rousey’s first defense a must-win if the two were ever to grace the same card.

Even if they do agree to fight on the same night, there is the small matter of which one of the stars headlines the card to figure out.

Dana White has fielded many questions about who the bigger star is between Rousey and McGregor. Most recently, the UFC president claimed that it was Rousey who packed the most star power between the two.

“By far. Not even close, by far the biggest star ever,” White said in an interview with Hot 97 at the beginning of October.

Although they seem to be battling it out for the pedestal of “biggest star”, it appears as though both of the fighters have a lot of respect for each other. Last month, McGregor sent the former champion good wishes ahead of her return to competition on December 30.

Regardless of that, one of the stars will have to take a backseat to whoever gets the main event slot should the UFC ever stage an event with both names.

It seems a given that Rousey would be given main event privileges over McGregor should she announce that it would be her last ever outing as a fighter. Once McGregor’s financial gain remain unaffected by him taking the co-main event out of courtesy, it seems the money that an event with both him and Rousey would bring to the table would be too hard to turn down for the slick talking Dubliner.

It's the Perfect Time for McGregor's Sabbatical

Joe Rogan Allows Himself to Dream About Conor McGregor vs. Nick Diaz