We Talk to Elias Theodorou, The First MMA Fighter Sponsored by Pert Plus 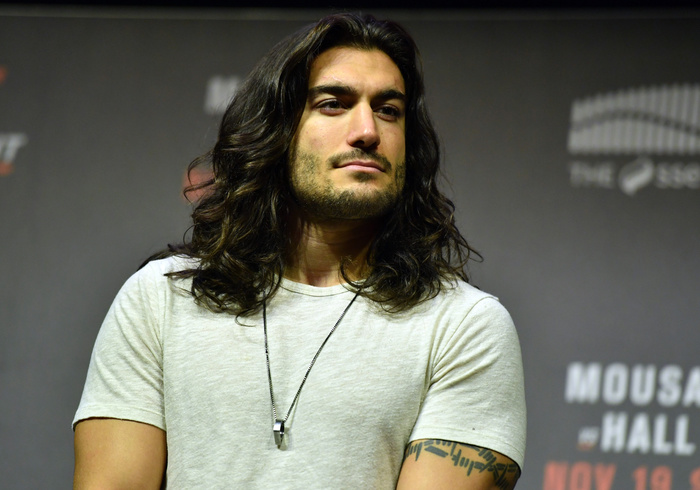 Hair hasn’t always had the best reputation or showing in MMA. In the early days of the UFC, when hair-pulling was still legal, it was a genuine detriment to your game, as Kimo Leopoldo learned when Royce Gracie grabbed his ponytail in their match at UFC 3. Even after those dark days in follicular history, though, hair of any length was more likely than not to be dismissed as a distraction that must be sacrificed for better training, as Rose Namajunas did in late 2015.

As both hairstyles and MMA evolve, though, a new generation of fighters that believe that hair can actually be a boon to their careers both inside and outside of the cage is starting to emerge. Some of them might even go so far as to argue that, much like Samson in the Bible, their hair is actually a source of their power.

Leading that charge is Elias “The Spartan” Theodorou. The TUF Nations champ, current UFC Middleweight, and MMA Twitter VIP has been using his Disney Prince-like mane to overwhelm his opponents and promote himself since the early days of his career. And his efforts—and shiny hair—are starting to pay off. Theodorou recently landed an endorsement deal with Pert Plus (and, as you’ll see below, he’s hustling hard to earn that paycheck). He will also be fighting in what he’s dubbed “The Mane Event” when he faces Cezar Ferreira at UFC Fight Night in Halifax this Sunday, February 19.

We caught up with Theodorou to talk about Pert Plus, his hair’s origin story, Pert Plus, and how his hair-based game plan for his next fight. 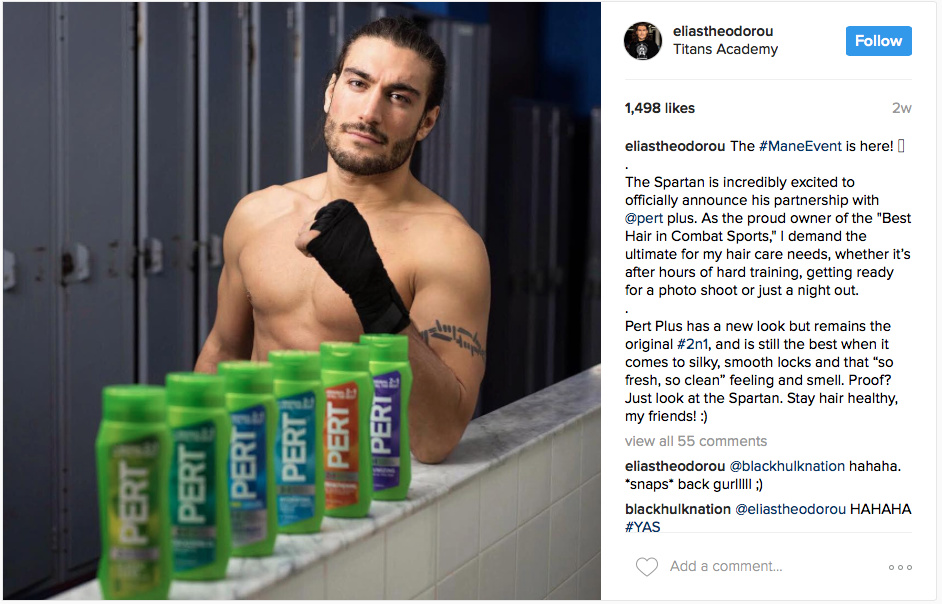 Fightland: At what point in your training or career did you realize that your hair was starting to become A Thing?
Elias Theodorou: One of my first fights. I was in a regional circuit and my then-manager was also doing cageside commentary and doing interviews with fighters leading up to it and I was the last one. He was just going on like “Ugh. It’s been so long. Everyone’s been so boring.” You know, the usual [monotone voice] “I trained really hard for this fight.”

He goes “I want something that’s just for fun.” And he asked “What is the difference between you and your opponent?” And I went “Well, look at him! He’s bald! I’m not. I’ve got the power of Samson on my side and I’m going to beat him mentally and physically.”

Given that you have described it as a Samson-like power, I’m assuming that you have never cut your hair for training purposes.
No! No. I’ve been asked if I would ever cut my hair to make weight. I say no, because I’m a professional and I make weight.

Does having longer hair ever get in the way when you’re training or fighting?
Sometimes my hair goes all over the place but, as long as I put that in the face of my opponent, it’s worse for them than it is for me.

So your hair is actually part of your offense.
For sure. Again, harnessing the power of Samson in any way, shape, or form is a good thing.

Is it hard to maintain healthy hair as a professional fighter?
Luckily I have the original and best 2-in-1, Pert Plus, on my side. Basically, when using any type of product—and, specifically, Pert Plus—the key is allowing your natural oils to shine. I shower every day, but I don’t actually condition and shampoo every single day, because you allow yourself to harness the natural oils that one has. I think that some people, in some ways, overdo it, but everybody’s different. You do you.

When it comes to preparing your hair for a fight, is it hard to maintain a balance of form versus function?
For sure. Sometimes it gets out of hand. I would even say the only blemish on my career is because of a hair malfunction. My hair kind of got out—we did three braids—and it came out. It was distracting, and I think it play a factor. Moving forward, in this fight, I will have a full set of braids, and I’m looking to kick some ass.

Are cornrows still the gold standard of fight hair?
For me it is, at least. And you can use it as offense. If and when I take Cezar Ferreira to the cage, I’m going to put my lovely locks right in his face and break form.

Other than using Pert Plus, what do you do to repair your hair after a fight?
A lot of it has to do with maintenance in general. Not shampooing and conditioning every day. Understanding if I need a trim if there’s a couple… God forbid, it hasn’t happened to me much, but if I ever have split ends. Also a healthy diet. You are what you eat and I eat nothing but the best.

Have you ever had any hair-related injuries. Is a Kimo situation still a going concern in MMA today?
No. I’ve been very lucky. And I think that’s because I have very healthy hair. I’ve never had a chunk pulled out and I blame and thank Pert Plus.

CORRECTION: A spokesperson for Pert has requested that we clarify that the brand is now called "Pert" and not "Pert Plus." Elias has been notified as well.