We Talked To the Biggest Gambler in MMA History 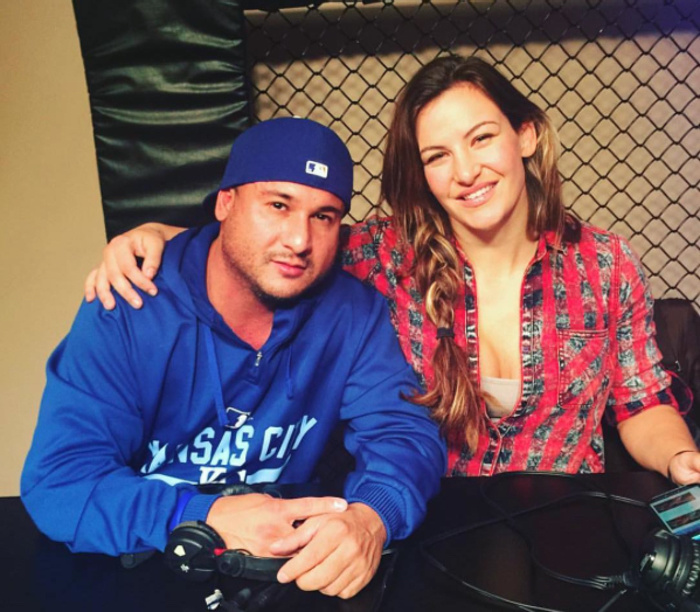 Weeks after claiming the largest future bet in the history of sports with a $2.5 million win on the new World Series champion Kansas City Royals last November, “Vegas” Dave Oancea took another gamble. The veteran sports bettor stepped out of his area of expertise in baseball and football to place his first ever mixed martial arts bet: $20,000 on a promising underdog named Holly Holm.

Vegas Dave came away with $240,000 when Holm knocked Ronda Rousey out in the second round of the main event of UFC 193 to become the new women’s bantamweight champion. At UFC 194, Oancea picked Conor McGregor over defending featherweight champ Jose Aldo to the tune of $30,000 take his MMA betting record to 2-0. For his third pick, he took women’s bantamweight challenger Miesha Tate over the new champ—and the woman who made him almost a quarter of a million dollars—Holly Holm and made history when his $77,000 bet made $300,000, the biggest in mixed martial arts history.

Curious to find out more about the professional gambler’s latest area of specialization, we talked to Vegas Dave about his interest in the sport, the challenges involved with betting on fighters, and predicting Miesha Tate’s big victory before she’d even been given the title shot.

Fightland: You first appeared on the MMA world’s radar after your Holm win, but from the interviews you gave in the aftermath, it was clear that you had at least some previous knowledge of the sport. How long have you been following MMA?
Vegas Dave: I’m from Hawaii so we were big B.J. Penn fans. We all grew up in Hawaii together. I really never bet on the UFC. Most of my knowledge is in baseball or football. I still watch it, but not to really make money off of it. And the Holm bet was pretty much my first bet and I went big on it. $20,000.

What made you start betting on the sport? Why did you decide to go with Holm?
I was on MMA Junkie [talking] about my Royals World Series win. They were excited that I won on the Royals for $2.5 million, and then a live caller called in and said “Hey, would Dave ever bet on the UFC?”

I said “You know what? In boxing or pro sports, I would take the underdogs. It just takes one lucky punch to knock someone out.” And I kind of said, as a joke, I would just bet $10,000 on the underdog. Then a week later, I was at a Portland Trail Blazers game, and all of the tabloids were coming out saying that the guy who won $2.5 million was going to bet $10,000 on Holly Holm.

I was kind of upset. I never exactly said that. But I started doing some research and I realized Holly was a world-class striker, boxer, kickboxer. And pro sports, it’s very hard to win a lot of games in a row. That’s why I took Denver over Carolina in football.  There’s too much parity. Anybody can beat anybody in pro sports, and when I saw the odds were 11-1, I was like “My God! Ronda’s due to lose a fight and, number two, she hasn’t gone past one round in her last five or six fights. So if Holly can get her to a later round, she can wear her out, and hopefully knock her out.” Which happened. So I thought it was good value. Ronda didn’t come prepared and Holly just outboxed her.

Dana White loves saying that oddsmakers are crazy for getting involved with MMA at all. In your professional opinion, is bookmaking and betting more volatile when it comes MMA than the other sports you deal with?

I believe so. In baseball, if you make a mistake in the second or third inning, you have six more innings to recoup that, and you have teammates that can pull you up. In boxing or UFC, it’s one lucky punch, or one lucky takedown, or if you don’t pass guard right, then you get arm barred. It’s just... anybody can beat anybody, on any given UFC night. And that was proven at the last UFC were both underdogs won.

Do you regret not putting money on Nate Diaz as well that night?
No. All of my focus was on Miesha. I didn’t want to take Diaz, because he was called up with, like, three weeks of preparation. I didn’t think he was going to be prepared that well, but, you know, he was taking a beating the first round and then he took it to the ground and tapped it out. But I just saw the replays of that. I was on the way to the casino to pick up my Miesha Tate money, so I missed that fight. 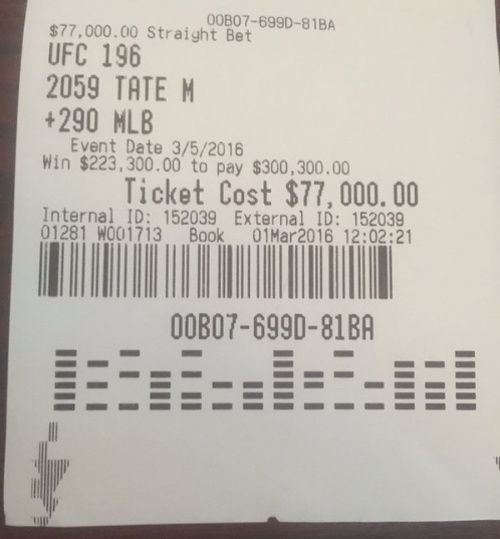 You told Miesha Tate that you were going to bet on her next fight before her title shot against Holm was even announced. How did that transpire?
I was on MMA Junkie with Miesha Tate. I had no idea who Miesha was until we were on the air together. I was like “God, this girl is pretty hot. She’s a pretty looking girl.” And then I heard her name... I had no idea, because I thought that I was going in to talk about baseball and football. And then she was talking and she was such a cerebral person. Miesha’s so smart. I was blown away at how intelligent she was and how well she spoke.

And I won $300,000. Then I saw her at the after party. She gave me a big hug and I was like “I told you!” She just laughed. I was really, really happy for her. She’s a great person. For one of the first times, I was praying... You know, the monetary reward is great, but I was praying for Miesha to win because she deserved it. I believe she’s just a great person.

So are you going to be betting on her in her next fight?
I don’t know. It’s a tough one. I just knew that she was going to win this fight against Holly. I just knew it. I don’t have a great feeling about this next fight, but I will definitely watch and root for her because we kind of have a friendship now. But, to me, it’s a tough one. Ronda’s going to be hard to lose back to back fights. She’s going to do whatever it takes to win.  Then you have to look to the other side of the perspective, with Miesha, it’s very hard to lose three times in a row to the same player. So it depends what the odds are, and it’s going to be weird because Miesha’s the champion, but I guarantee Ronda’s going to be the favorite.

Who would you pick in a rematch against Holm?
Miesha.

You’ve bet on fights on three of the last four UFC PPV cards. Is this something you want to continue doing regularly, or are you only interested in the occasional specific fight?
I could maybe do one by card. I’ve got a lot of people reaching out to me to get my picks for MMA, so I definitely think there’s a market there for me. With me, I can’t bet with my heart, so it’s not like I can go with Miesha all the time, or bet with another person all the time. I’m gonna bet with my head, not my heart. This is what I do for a living. I’m a professional gambler, so there’s no loyalty to anybody. It’s just who’s going to make me money, but I think one per card is what I’d predict.