Weighing the Options of Brock Lesnar 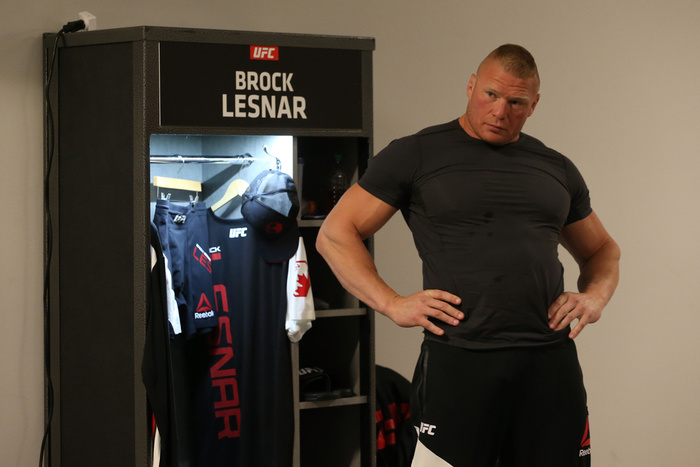 Of all the storylines woven into last Saturday’s UFC 200, perhaps none were as intriguing as the Octagon return of former UFC heavyweight champion and current WWE superstar Brock Lesnar. In the weeks leading up to the historic event, we were all dying to find out how the former champ would look after four years away from the cage, and how he would deal with the freakish punching power of his opponent, Mark Hunt.

As it turns out, Lesnar looked as terrifying as ever on fight night, dominating Hunt on the mat en route to a well-deserved unanimous decision win. And just like that, we were all hungry for more. Having seen a healthy Brock Lesnar thrash a top-10 heavyweight, we were all immediately curious as to how he’d perform against other members of the heavyweight elite.

Unfortunately, any new questions that MMA fans have about Lesnar’s future will have to wait—possibly for a very long time, maybe even forever. This, of course, can be attributed to the fact that Lesnar is still under contract with WWE. In fact, he’ll be competing opposite Randy Orton at the organization’s annual SummerSlam event this August.

All that said, however, its not impossible that Lesnar returns to the UFC sometime in the future. While the 38-year-old is certainly no spring chicken, he seemed keen to leave the door to the Octagon open at the UFC post-fight press conference.

“Let's get something clear: Brock Lesnar does what Brock Lesnar wants to do," he told the media when probed about a potential Octagon return.

So, if Brock Lesnar decides Brock Lesnar does want to compete for the UFC again, and the folks over at WWE decide to allow such a thing, who might serve as the hulking wrestler’s next opponent?

Well, it should come as no surprise that there is a long list of interesting options.

The most obvious of these options is probably Frank Mir. Mir and Lesnar are, after all, split 1-1 across two previous bouts. Those numbers alone suggest the two big men have a score to settle, and if their past trash talk is to be believed, they also really don’t like each other. Furthermore, the bout makes some sense given Mir’s current decline and the fact that Lesnar has competed just once in the last four years. The problems with this bout are immediately clear, however. After testing positive for banned substances in a USADA-administered test, the heavyweight veteran was handed a lengthy suspension. In the wake of this development, he’s also requested a release from his UFC contract. And so, Lesnar’s next opponent—if he ever has a next opponent—will have to be found elsewhere.

Another interesting choice for Lesnar is Josh Barnett. Like Lesnar, Barnett has quite a bit of history in the pro-wrestling arena—though it hasn’t been on quite as big a stage. This similarity alone makes a potential Lesnar-Barnett clash appealing, as the two fighters would surely cut some awesome promos in the buildup to the fight. Of course, the appeal of this fight carries over to the way the two fighters match up, too. As two incredibly talented grapplers with very different styles, it’s hard to imagine their fight not being entertaining. Could Lesnar use his incredible strength to bully a grappler as talented as Barnett? Could Barnett navigate Lesnar’s absurd power to find success with his fantastic submission game? Just two of the many questions that make this prospective scrap interesting. Then again, Lesnar’s choices don’t end there.

Should he return to the Octagon, he might also be matched up with Derrick Lewis, who scored a close, but significant win over Roy Nelson two nights before UFC 200. Now, there’s no denying that from a pure skills perspective, Lesnar is some distance ahead of Lewis. That said, Lewis could be the only heavyweight on the UFC roster that can even come close to rivalling Lesnar in the strength department. Furthermore, he possesses the kind of fight-ending power that makes him an interesting opponent for pretty much anyone. Then there’s the fact that this a fight Lewis has asked for. While asking alone probably isn’t going to earn him such a massive opportunity, it certainly doesn’t hurt his chances either.

Lesnar’s dominant win over Hunt would seem to put him in line for a substantial step up in competition. Given this, aging veterans like Mir and Barnett could well be passed over in any future hunt for a Lesnar opponent. Rising fighters like Lewis could also be skipped. Instead, the former champ could well find himself in there with one of the game’s very best, and in such an event, no choice is more appealing than a fight with the winner of Fabricio Werdum and Ben Rothwell’s UFC 203 scrap.

If Werdum wins, we get a collision of Lesnar’s wrestling and physical tools, and Werdum’s incredible jiu jitsu and veteran poise. If Rothwell wins, then we get a scrap between the most fearsomely powerful fighter in UFC history, and an oft-unheralded veteran with a ridiculous propensity for surprising us. See: Rothwell’s knockout of Alistair Overeem or submission of Josh Barnett. Indeed, whether it’s Werdum or Rothwell that emerges victorious at UFC 203, we’ll have a very interesting opponent queued up in the event that Brock Lesnar opts for another UFC bout.

The real point here, however, is that having suddenly re-emerged as a relevant heavyweight talent, Brock Lesnar has a plethora of exciting options ahead. Had he lost to Mark Hunt at UFC 200, this wouldn’t be the case. We’d all be assuring that we always knew his comeback was doomed to fail; that he should have stuck to the choreographed world of pro wrestling. But that’s not how things went down. Brock Lesnar returned to dominate an extremely dangerous opponent, and as such, he has a very interesting road ahead in the UFC. All he has to do is walk down it.

Aldo versus Edgar II: At the Mercy of Pivots Once More

Expecting the Worst From Brock Lesnar at UFC 200