Weighing the Options of Dominick Cruz 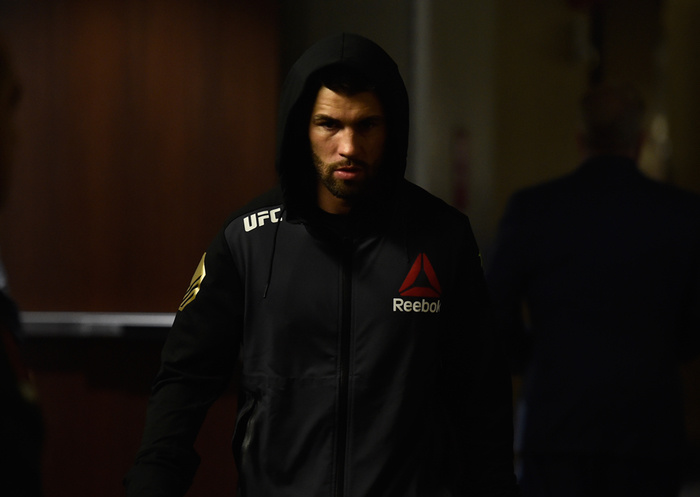 It’s hard to imagine a better beginning of 2016 for Dominick Cruz. After years on the injury list, the former bantamweight champion returned to the cage to swipe the title from TJ Dillashaw in one of the best fights of the year. It was one of the most memorable comeback stories in MMA history, and from there, things only got better for him.

Just months after reclaiming the bantamweight title, Cruz made a successful defense of it, doling out a dominant decision defeat of age-old rival Urijah Faber. Two fights in less than six months—an unthinkable feat at the height of his years on the injury list.

Unfortunately, 2016 didn’t end the way it began for Cruz. In fact, the year really couldn’t have ended much worse for him. Sure, he wasn’t knocked out cold or coaxed to sleep by a choke, but he did find himself on the wrong end of a fairly lopsided thumping at the hands of the largely unheralded Cody Garbrandt.

With his title loss still quite visible in the rear-view mirror, Cruz enters 2017 on unfamiliar ground. Sure, he’s lost before—once—but that loss was nearly a decade ago, back in the salad days of his long career. Bouncing back from defeat is not something Cruz has had a lot of practice at, yet in these first months of 2017, that’s just the task he’ll be faced with. This, of course, begs the question: who does Dominick Cruz fight next?

Well, the most obvious choice would probably be a rematch with Garbrandt. Cruz’s previous dominance would seem to warrant an immediate shot at redemption, and given the exciting nature of his fight with Garbrandt, it’s unlikely that anyone would complain if they were paired together again. That said, the UFC could well pit Garbrandt against his former training partner TJ Dillashaw next, which would mean Cruz’s next opponent would have to be plucked from somewhere else in the division.

Cruz might be paired with John Lineker, who lost to Dillashaw just moments before he stepped into the cage with Garbrandt. From the early vantage point, it was clear that the Dillashaw-Lineker winner would probably be paired with the Cruz-Garbrandt winner next. If the winners of these two bouts are indeed paired together, it makes sense to pit the losers against each other too. And as the best bantamweight not named Dillashaw, Cruz or Garbrandt, Lineker makes sense for Cruz from a rankings standpoint too.

We know, however, that Lineker sustained a broken jaw in his bout with Dillashaw. This unfortunate injury is likely to keep the brick-fisted former flyweight on the shelf for quite some time, which means he might not get the call to fight Cruz.

In this event, Cruz’s next opponent would probably be pulled from somewhere else in the bantamweight top-10. Former bantamweight title challenger Michael McDonald would make an interesting challenge. So too would former flyweight challenger John Dodson. And because both men recently came up short against Lineker they both jive with the UFC’s typical winners with winners, losers with losers matchmaking formula.

Given Cruz’s clear status as the greatest bantamweight in MMA history, however, it’s admittedly hard to get excited about him fighting just another bantamweight contender. While it’s certainly possible that he could be defeated by somebody like Lineker or McDonald or Dodson, it’s simply hard to imagine anyone outside of Garbrandt and Dillashaw giving him much of a fight. He’s just that good.

So, in the hunt for inspiring and interesting matchups for Cruz, the UFC might just shine their searchlight outside the bantamweight division. Where they to do so, there is one particular opponent that is more appealing than the rest: former lightweight champ Frankie Edgar.

Edgar, who now competes in the featherweight division, has established himself as the division’s best current fighter other than champion Jose Aldo, who he’s now lost to twice. His two previous losses to Aldo leave him in a bit of a strange spot as far as featherweight title shots go. He’ll have to achieve a small miracle to get the UFC and its fans excited about the possibility of his fighting the champ for a third time. As such, he too may look outside his current division for fresh and exciting matchups—just like he did in May of 2015 when he welcomed long-time bantamweight Urijah Faber back to the featherweight division. Were Edgar to fight somebody outside the featherweight division, it’s hard to imagine a more appealing foe than Cruz.

Yes, whether it was a case of Edgar welcoming Cruz back to the featherweight division, where he began his career, or Cruz welcoming Edgar to the bantamweight division, where fans have been interested in seeing him compete for years, this fight is a compelling one. Cruz and Edgar are, after all, two of the greatest fighters ever to compete south of the lightweight division, and as two masters of footwork, it’s hard to imagine their fight not being a fun one. Finally, in an era when the UFC seems to favor lucrative “money fights” over fights that make sense from a rankings standpoint, this fight is actually a fairly feasible option. If there was fan interest in it, it could just happen.

The moral of the story here, however, is that this is far from the end of the road for Dominick Cruz. The former champ still has a handful of interesting matchup options ahead of him. A win in any of these matchups would likely thrust him right back into title contention, where gold would be just one vintage Dominick Cruz performance away.

How Cody Garbrandt Killed the King

Dominick Cruz: One More Ghost From the Past