Weighing the Options of Fabricio Werdum 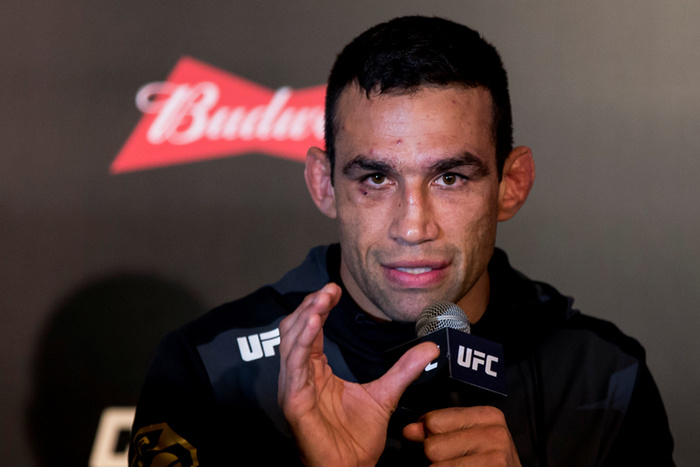 Just a few weeks ago, Fabricio Werdum was a frontrunner in the greatest “heavyweight of all time” debate. He’d shocked the world with a submission win over Fedor Emelianenko. He’d tapped legendary heavyweight grappler Antônio Rodrigo Nogueira. He’d snuffed the notoriously durable Mark Hunt with a flying knee. He’d subbed a long-time champion in Cain Velasquez, earning the UFC heavyweight strap in the process. Indeed, Werdum’s mountainous accomplishments were beginning to make it quite difficult to refute his status as MMA’s true heavyweight GOAT.

But then, in the main event of last weekend’s UFC 198, the Brazilian veteran ran chin-first into a Stipe Miocic right hand, face-planting on the mat in the subsequent seconds. With that, he’d lost the UFC heavyweight title, and the arguments for his sitting a top the heavyweight division’s all-time great list fizzled out.

Of course, this is not to suggest that Werdum’s career is over. Though he is almost 39-years-old, the grappling whiz still stands out as one of the best heavyweights on earth, and seems to have plenty of gas sloshing around in the tank. And despite the fact that the former champion has already fought many of the game’s top heavyweights over his 27-fight career, he’s still got some pretty compelling matchup options on the horizon.

So, who’s next for Fabricio Werdum?

Well, considering the former champion’s last few fights have seen him take on a murderer’s row consisting of fighters like Travis Browne, Mark Hunt, Cain Velasquez, and Stipe Miocic, it might be time for a small step down in competition. In this event, Werdum might find himself on the canvas with a fringe contender like Stefan Struve or Derrick Lewis. But let’s get real. Despite Werdum’s recent stumble, he’s still in his competitive prime, and we know he’s hell-bent on winning back the heavyweight crown. This means he’s unlikely to accept anything other than a top-ranked opponent in his next bout.

The most logical next step for Werdum, then, might actually be a rematch with an old foe: Junior Dos Santos. The pair first met back at UFC 90 in 2008, on a night that marked Dos Santos’ UFC debut, and thanks to a thunderous uppercut-induced knockout, the final fight of Werdum’s first stint in the UFC.

In the years immediately following Werdum’s loss to Dos Santos, a rematch would have made almost no sense. Today however, when Werdum is a recent UFC champion, and Dos Santos has rebounded from a stretch of adversity with a five-round thrashing of fellow contender Ben Rothwell, the rematch makes plenty of sense. Better still, the result of their first fight—and everything the two fighters have accomplished since that first fight—means that this prospective rematch comes with a compelling storyline attached.

Then again, given that Dos Santos is currently on the bench with a shoulder injury, and Werdum will probably need some time to nurse his wounds (and pride), the timing for this rematch could be a bit tricky. Luckily, Werdum’s options don’t end with Dos Santos.

Another compelling choice for the former champ—and one that’s in keeping with the UFC’s typical winners-against-winners, losers-against-losers matchmaking formula—would be Big Ben Rothwell. Rothwell, as I mentioned above, recently found himself on the receiving end of a five-round whooping at the hands of Dos Santos. That said, the hulking American entered that bout on the strength of a fantastic four-fight streak—a run that’s difficult to forget even after his lopsided defeat to Dos Santos. Today, he and Werdum are both looking to get back to their winning ways. Pitting the two big men together would provide them both with the opportunity to do so, and better yet, as two of the division’s craftier veterans, they match up beautifully on paper. Werdum’s surgical technique versus Rothwell’s brute power, Rothwell’s unpredictability versus Werdum’s veteran cunning.

And then there is perhaps the most exciting of all Werdum’s options; a fight with arguably the only man that can compete with him in the experience and grappling departments: former heavyweight champion Josh Barnett. When we last saw Barnett, he came up short to Ben Rothwell, losing by submission in an outcome that nobody anticipated. Barnett and Werdum, then, now find themselves in very similar boats, as decorated veterans whose time at the top may well be drawing to a close. What better way to see where these two aging heavyweight are at then pairing them together in a fight that would capture the imaginations of grappling fans everywhere? The victor would earn one final push back into title contention, while the loser would be forced to accept career twilight, and either way, the fans would win.

Regardless of Werdum’s next move, however, it’s safe to say that he has no shortage of intriguing options ahead—even in spite of his having already fought many of today’s best heavies. And though he’s quickly closing in on 40, his multitude of options means he still has plenty of quick routes back to title contention. The Brazilian heavyweight may well surprise us again with another late-career title run. History shows, after all, that it is extremely unwise to count Fabricio Werdum out—even when his opponent is father time.

How Stipe Miocic and Misdirected Aggression Killed the King

Werdum Leads the Charge: The Definitive Guide to UFC 198