Weighing the Options of Fabricio Werdum After UFC 203 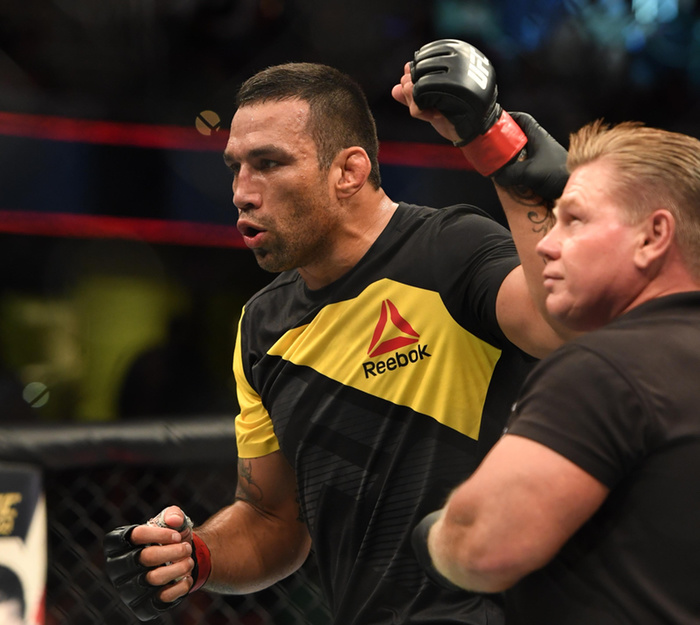 Last weekend, on the main card of UFC 203, former UFC heavyweight champion Fabricio Werdum (21-6-1) separated himself from an embarrassing knockout loss to reigning champ Stipe Miocic. He did so with a unanimous decision victory over Travis Browne, who replaced an injured Ben Rothwell on just a few weeks’ notice.

There is an asterisk attached to Werdum’s victory over Browne, however, in the way that it was incredibly strange.

It began with Werdum landing a ridiculous flying, side-kick on Browne’s face. Minutes later, a Werdum punch seemed to injure Browne’s finger, which prompted Browne to call a timeout—something fighters are not allowed to do, and something that probably should have resulted in Werdum’s being awarded an unsavory TKO win. After this finger-SNAFU, the two heavyweights pelted each other with slow, mostly ineffective shots until the final bell rang. Then, finally, in the seconds after the judges’ scorecards were read, Werdum planted a front kick on the torso of ornery Browne coach, Edmond Tarverdyan. And, of course, there’s the fact that Werdum already defeated Browne just a few years ago, which meant this controversy-packed victory did very little to raise his stock.

In Werdum’s perfectly-imagined world, he would have scored a quick submission or knockout win over Browne, reasserting himself as one of the game’s premier heavyweights, and very possibly earning himself a title rematch with Miocic in the process. Instead, the only real function of Werdum’s win over Browne was to remind us just how strange fights (particularly heavyweight fights) can get, and that he’s a better fighter than Browne, which we already knew.

So, as badly as Werdum wants the chance to reclaim his title, his recent win over Browne will probably not be enough to earn him that chance. Instead, that honor will probably go to Cain Velasquez who, coincidentally, defeated brown the right way at UFC 200.

This, of course, means that Werdum will likely have to turn his attention elsewhere. This begs the question: who does he fight next?

Well, luckily for him, there are some tasty options on the menu.

Perhaps the most obvious of these options is Ben Rothwell (36-10), the giant that Werdum was originally supposed to fight at UFC 203. Though Werdum has now returned to the win column, while Rothwell is still riding a loss to Junior Dos Santos, the fight still satisfies three key matchmaking parameters: it would probably be competitive, it would probably be entertaining, and it makes some sense from a rankings perspective. Yet UFC matchmaker Joe Silva rarely deviates from his winners-with-winners, losers-with-losers matchmaking formula, which means this probably won’t be the matchup we get.

Instead, Werdum could well be paired with Josh Barnett (35-8), one of the few big men on the UFC roster who can outdo him in terms of big-stage experience. We last saw Barnett earlier this month, when he submitted former champion Andrei Arlovski in a wild heavyweight war. Because he and Werdum are both riding wins, this is a matchup that Joe Silva will almost certainly consider. They’ve also miraculously not fought each other before, despite the length of their respective careers. The strongest feature of this bout, however, is the way Werdum and Barnett match up. Though their backgrounds are quite different, they are two of the most talented grapplers in heavyweight history, and as such, their pairing would almost certainly be a thriller. Yet there is one matchup that is arguably more appealing still—and I’m not talking about a fight between Werdum and Edmond Tarverdyan.

When determining Werdum’s next move, Joe Silva may opt to pair him with an old foe in Junior Dos Santos (18-4), a fellow Brazilian who also recently sat on the heavyweight throne.

Werdum and Dos Santos first met back in 2008. On that night—which marked Dos Santos’ Octagon debut and the last night of Werdum’s first stint with the UFC—Werdum found himself on the wrong end of a blistering, uppercut-induced KO. Today, when both men have won and lost the belt, yet still remain members of the heavyweight top-10, a rematch makes perfect sense. Werdum is looking for an opponent that will push him back into a heavyweight title fight. Dos Santos, fresh off a win over Ben Rothwell, but still too close to a knockout loss to Alistair Overeem, is looking for the exact same thing. Why not pair these two heavyweight greats together for a fantastic style-clash with a built-in revenge narrative?

Werdum may not have accomplished everything he hoped for with his whacky win over Travis Browne. Yet the former champ is still just a short distance from title contention. All it’ll take is a big win over a game opponent to push him the rest of the way there, and thankfully, he’s got plenty of exciting options to that end.

How Stipe Miocic Defended the Crown

Fabricio Werdum Kicked Travis Browne's Coach and It Was Hilarious