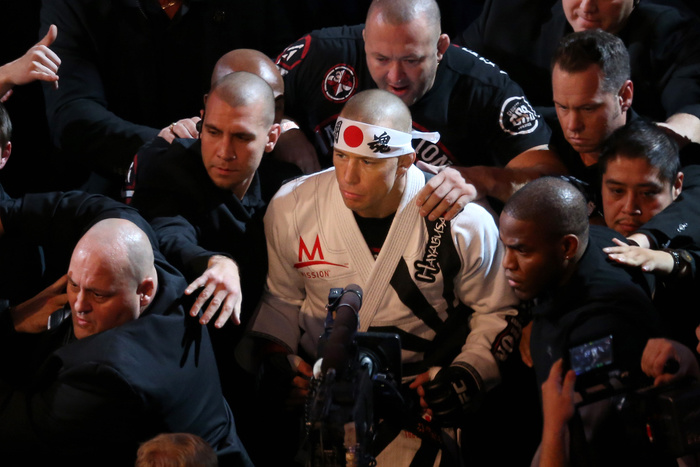 Yesterday afternoon, on this week’s episode of The MMA Hour, former UFC welterweight champion Georges St-Pierre shook up the MMA world by announcing that he plans to walk away from his contract with the UFC—a contract his lawyer says is no longer valid after the UFC failed to line him up with a fight. This news, of course, is a stark contradiction of the long-swirling rumors that he would be returning to the Octagon, perhaps as soon as December 10 at UFC 206 in Toronto.

Instead of returning to the UFC, where long-discussed bouts with fighters like Tyron Woodley, Nick Diaz, Anderson Silva, and Michael Bisping could have awaited, the Canadian legend will now enter uncharted territory as a free agent. At the moment, there’s no way of knowing where this free agency will take him. It’s also possible that he simply opts to hang up the gloves for good, rather than testing his mettle in the cage or ring of another organization.

Just for fun, though, let’s take a look at some of the matchup possibilities that exist for the welterweight great outside the UFC. For the sake of brevity, we’ll focus on his options in World Series of Fighting, Rizin Fighting Federation, One Championship, and Bellator MMA—probably the only organizations that can come anywhere close to affording him anyway.

Were submission specialist Rousimar Palhares still part of the WSOF picture, he would undoubtedly be the most interesting possibility for St-Pierre in the WSOF cage. Unfortunately, Palhares has effectively slaughtered his own career by injuring his opponents with his vaunted submissions, only to be repeatedly knocked out in middleweight bouts overseas when he was suspended by North American athletic commissions. Given this, St-Pierre’s next best options in the WSOF cage are Jake Shields and Jon Fitch, who will fight for the organization’s welterweight crown on New Years Eve. A quick look at the history books, of course, reminds that St-Pierre has already dominated both these men in the UFC, which sucks pretty much all the appeal out of his moving to WSOF.

So let’s move on to Rizin Fighting Federation.

Since its creation late last year, Rizin has gone full steam ahead in the creation of its heavyweight, light heavyweight, and lighter weight divisions. They’ve piggy-backed on the stardom of Pride veterans like Fedor Emelianenko, Mirko “Cro Cop” Filipovic, Wanderlei Silva, and “Felony” Charles Bennett. They’ve also done their best to create new stars in Jiri Prochazka, “Baruto” Kaido Hoovelson, Kron Gracie, Asen Yamamoto and Gabi Garcia. Unfortunately, however, Rizin’s welterweight talent pool is all but dry.  Were St-Pierre a light heavyweight or a featherweight, he’d have no shortage of options in the Rizin ring. As a welterweight, however, his only choices would be bizarre encounters with beefed-up lightweights, or shrunken down light heavyweights in the middleweight division. Of course, this isn’t to suggest these fights wouldn’t be interesting, but for a competitor like St-Pierre, they’re probably not the top choice.

So how about Singapore’s One Championship?

Well, as it turns out, One Championship is home to one of the most compelling matchup options out there for St-Pierre: former Bellator welterweight king Ben Askren. Shortly after estranged former Bellator president Bjorn Rebney made the weird decision to release the dominant champion from his contract, Askren set up shop in the One cage. Not long thereafter, he defeated brick-fisted Japanese fighter Nobutatsu Suzuki to win the organization’s welterweight crown.

The problem, however, is that One Championship seems to be having a tough time finding viable opposition for Askren. Though he appears to have a decent test on the horizon in a rematch with Luis Santos, that’s where his exciting options in the One cage end. Were St-Pierre to sign with the organization One Championship could suddenly play host to a massive showdown between one fighter who stands out as the greatest welterweight of all time, and another who was long stood out as the best welterweight outside the UFC. The issue though, is that the winner of this bout would quickly return to Askren’s current situation, as a dominant champion with very few interesting challengers on the menu.

So, let’s take a look at St-Pierre’s options in Bellator.

Well, considering the fact that Bellator is MMA’s irrefutable second-strongest organization, it should come as little surprise that this is where St-Pierre’s options are most numerous. In the welterweight division alone, he’d have several fantastic choices. Given his status as the welterweight GOAT, he’d almost certainly be given an immediate welterweight title shot against burgeoning Bellator star Andrey Koreshkov. Win or lose, he could then look forward to scraps with talents like Douglas Lima, Michael “Venom” Page, and Paul Daley.

He could also look forward to super fights with beefed-up lightweights in current Bellator champ Michael Chandler, and former UFC champ Benson Henderson, both of whom have some experience in the welterweight division. And then, there’s perhaps the most interesting of all St-Pierre’s Bellator options: a middleweight showdown with recent Bellator signee Chael Sonnen. Sonnen, who was a three-time title challenger in the UFC, has expressed interest in a fight with St-Pierre in the past. Were St-Pierre to sign the UFC, that interest could become reality, for the biggest fight Bellator has ever promoted.

As St-Pierre acknowledged shortly after announcing his free agency on The MMA Hour, he is about to enter uncharted territory. Having debuted with the UFC at UFC 46, and spent his subsequent 19 fights with the organization, free agency on this scale is something he has never experienced. What is clear as he embarks down this mysterious road, however, is that he has plenty of riveting options in many of the worlds top organizations–all of whom will surely be opening their check books in hopes of locking up his services.

We Asked Some UFC Fighters About GSP's Love of Dinosaurs