Weighing the Options of Robbie Lawler 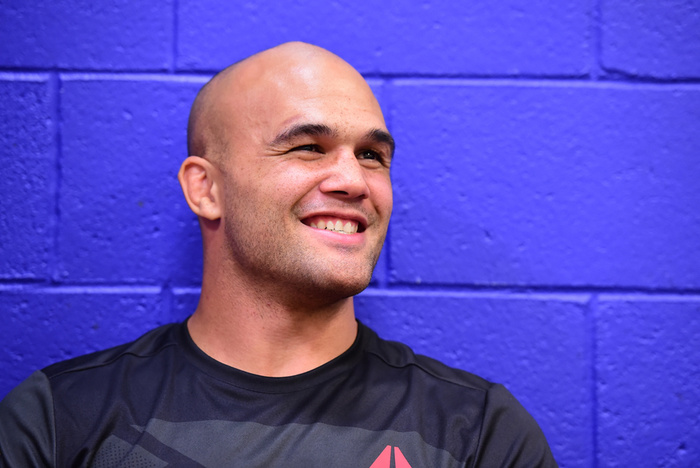 Just a few years ago, the world was ready to lower Robbie Lawler’s fighting career into the ground. Considering the ugly 3-5 record he’d amassed as a member of the Strikeforce middleweight division, and the fact that he’d managed to fall asleep at a 2011 press conference, this wavering faith in him was understandable. He just didn’t look like a fighter who wanted it anymore.

But then, in 2012, Lawler left his long-time home at Miletich Fighting Systems and relocated to American Top Team—one of the sport’s top training camps. Not long thereafter, he returned to the UFC’s Octagon and dropped down to welterweight. Three welterweight wins later, and Lawler was fighting Johny Hendricks for the divisional crown. Though he would lose this first crack at UFC welterweight gold, two additional wins would propel him into a second title fight with Hendricks, and this time around, he came out on top.

After unforgettable title defenses against Rory MacDonald and Carlos Condit, Lawler attempted to make his third defense in the main event of UFC 201 last Saturday, when he took on a former training partner in Tyron Woodley. As we now know, however, this is where Lawler’s unlikely time at the top would end, as he was put down by a Woodley right hand in the very first round.

With the belt now around Woodley’s waist, Lawler re-enters the crowded welterweight contendership race for the first time since 2014. Given that he is 34 years old, and that he’s absorbed hellish amounts of punishment over the course of his 15-year career, there’s plenty of reason to believe the curtains or closing on his time as a top dog. Then again, Lawler’s transforming from a forgettable Strikeforce middleweight to a dominant UFC welterweight champion proves that he’s not the kind of fighter we should be counting out either. Bleak as his current situation may be, he could well surprise us with another run. It’ll all depend on how he performs in his next fight.

This, of course, begs the question: when Robbie Lawler is healed up and ready to get back in there, who will be standing on the other side of the canvas?

Well, take a quick scan through Twitter, r/MMA, or the Sherdog forums, and you’ll quickly uncover the most popular opinion in this regard: that the time has come for a rematch between Lawler and Nick Diaz. The two fan favorites first met back in 2004, on the main card of UFC 47. On that night, Diaz surprised by removing Lawler’s batteries with a second-round punch.

More than a decade after this first encounter, both fighters remain near the top of the welterweight heap, and both still stand out as two of the most entertaining competitors in the game. Given that Lawler has now lost his title, and that Diaz is ready to return from a lengthy suspension, the timing for a rematch really couldn’t be better. But let’s play devil’s advocate. Lawler is likely to need some time to recover after his thunderous, knockout loss to Woodley. Diaz, meanwhile, will need to be relicensed—that’s if the notoriously ornery Stockton slugger even wants to fight again. Given these variables, its possible that Lawler’s next opponent will have to be pulled from somewhere else in the welterweight division.

In that event, the former champion might mix it up with an old foe in Johny Hendricks. The two fighters have met twice before—both times for the title. The first time around, Hendricks came out on top. The second time, Lawler won. Given that both of these encounters were incredibly competitive decisions, the grounds for a tie-breaker are certainly there. And considering the fact that both men are now riding losses, the matchup makes sense from a rankings perspective too. Then again, Lawler was a champion less than a week ago, while Hendricks is on a tough, two-fight skid. As a result, UFC matchmaker Joe Silva might opt to pair Lawler with a higher-ranked fighter—say, Kelvin Gastelum.

Less than a month ago, on the undercard of UFC 200, Gastelum scored the biggest win of his career, out-dueling the aforementioned Johny Hendricks to a sound, unanimous decision win. In the wake of this win, Gastelum is poised for a big step up in competition—right at the moment, incidentally, that Lawler is ready for a bit of a step down. Why not pair these two high-action welterweights together?

Then, finally, there’s perhaps the most interesting of Lawler’s options: a scrap with the winner of Neil Magny and Lorenz Larkin’s August 20th showdown. If Magny wins, then we get an interesting style clash between a rangy tactician on the way up, and a ferocious former champion eager to get back on track. If Larkin wins, meanwhile, we get an even more appealing showdown.

To remind, Larkin upset Lawler under the Strikeforce banner back in 2012, so there’s a bit of history there. More important than any shared history, however, is the way these two welterweights match up. Despite the dark cloud that hung over him in the Strikeforce days, Lawler has established himself as one of the most consistently exciting fighters in the game; a barbarian who thrives when he’s down on the scorecards. Larkin, meanwhile, has simultaneously risen through the welterweight ranks and established himself as one of the game’s finest purveyors of spinning shit. What happens when a wrecking ball collides with a helicopter blade? This rematch would give us a good sense.

In examining the options for Robbie Lawler’s next fight, one thing is very clear: he’s blessed in the way that he matches up beautifully with pretty much every welterweight on the UFC roster. And while this would seem to suggest an easy job for Joe Silva, we also know that Lawler is at his most dangerous when his back is against the wall. When we thought his career was over, he rose from the dead to win the UFC welterweight title. When he was down on the scorecards in his UFC title defenses, he transformed into a blood-crazed lunatic and stole the championship rounds. When he’s faced with the colossal pressure of rebounding from the loss of his title, what terrifying levels of ferocity will he be capable of, and is there a fighter alive with the cojones to get in there with him to find out? No, on second thought, Joe Silva’s hunt for Robbie Lawler’s next opponent might not be as easy as it seems.

With Suspension Over, Tyron Woodley Wants Nick Diaz Not 'Wonderboy'