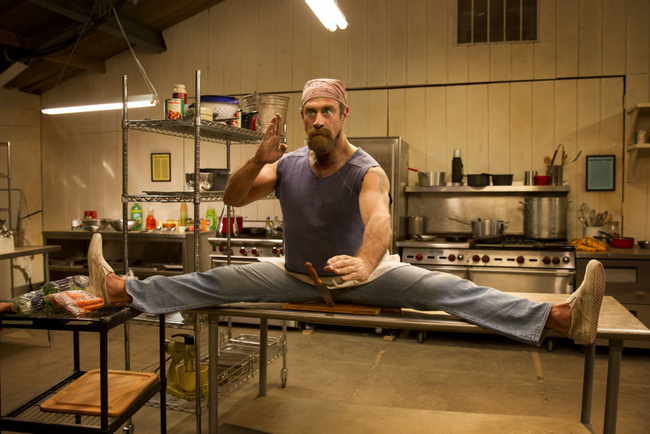 After an agonizing amount of anticipation—and many years of obsessive fantasizing about the mere possibility of such a thing—Wet Hot American Summer: First Day of Camp, the prequel series to the beloved 2001 cult classic film Wet Hot American Summer, is finally on Netflix. To celebrate, the internet has exploded into a mess of think pieces, oral histories, unapologetic geek-outs, and whatnot on the subject and we’d like to get in on this action. Or, more accurately, we’d like to use the WHAS franchise’s tenuous connection to the martial arts world as an excuse to talk about one of our favorite actors: Christopher Meloni.

The Law & Order: SVU and Oz star, who plays the militaristic fridge-loving cook Gene in Wet Hot, has a background in a number of martial arts, and traces of that training often creep into his performances. It’s even evident in the trailer for the new series, when Gene breaks into the splits during a fight with Jon Hamm’s character.

In an interview posted earlier today, Time Magazine asked Meloni if he needed to train for that scene. “I’m pretty flexible,” he said. “I took martial arts for many years and I’ve kept my flexibility somewhat. That was my idea—a subtle homage to a Jean-Claude Van Damme movie.”

According to a January 2001 interview with Spirit Magazine, Meloni has “always been interested in fight culture. Not so much getting into fights, but whatever that thing is that’s mystical, magical about it.”

That enthusiasm eventually led Meloni to take Taekwondo lessons in college. “I took the straight, strict, old traditional style with the wide stances, katas, all of that,” he told ABILITY Magazine in 2005. 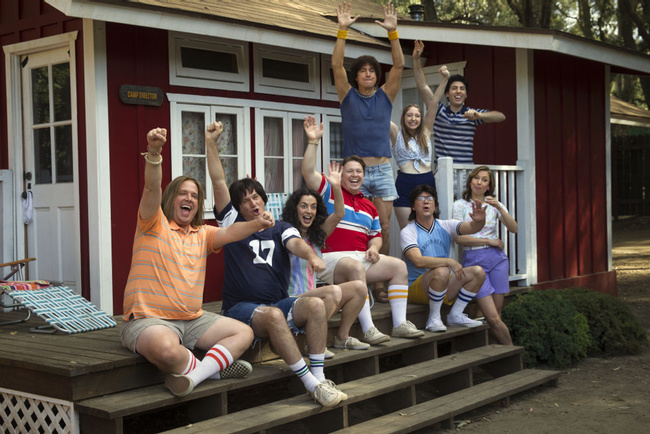 In the Spirit interview, he admitted that he’d enjoyed his tae kwon do training, “But for my money, something was missing. So I got into a style called Goshin jujitsu. That incorporated not only kickboxing but also grappling techniques. For me, Muai Thai [sic] is the best of both. You punch—it’s a very hard style—and then you get in and grapple and throw.”

After that, he added Savate and Brazilian Jiu-Jitsu to the mix. “I learned grappling in the Gracie system,” he told Spirit. “Which is arm bars and submission holds. I was great, but I haven’t done it in a while.”

Meloni went on to say that his training has influenced the way that he played his SVU character, Elliot Stabler, when he’s confronting perps. “The first thing you do is read your opponent. So if I lean into him in an interrogation, I would think ‘Okay, I’m going to put my weight on my left hand, so my right hand is available to block out of counterstrike.’ You’re trying to break him down, but the guy’s unpredictable,” he stated. “I tell you where I think you can see this training is in how somebody uses his balance - where they keep themselves in relation to the perpetrator, keeping distances that are correct and comfortable, knowing when and where to go in, how you move if somebody's coming at you.”

Meloni also got to show off some of his grappling skills on the groundbreaking HBO prison drama Oz, when his character, the dreamy and dangerous inmate Chris Keller taught his future soul mate, Tobias Beecher, how to wrestle in the early days of what is undeniable the greatest love story of our time. He even used some of that Gracie Jiu-Jitsu he’d picked up when Keller broke all of Beecher’s limbs in an attack that included an arm bar. The form an efficacy of this particular submission was the cause of some editorial debate during the genesis of this article, by the way. You can judge for yourself with this brief clip of the scene here.

By all accounts, Meloni no longer trains regularly, although he did tell Men’s Health that he was supplementing his weight training regimen with a mix of extracurricular activities that included waterskiing, basketball, yoga, and martial arts in 2013. But he’s clearly still benefiting from the results of his time in various rings and on various mats. He is, after all, a 54-year-old man who can literally drop into a JCVD reference at a moment’s notice. You’ve got to respect that.