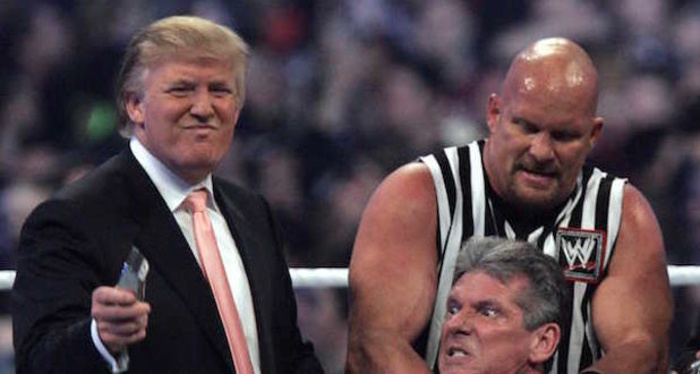 The booing started before Donald Trump took the stage at Madison Square Garden, and it didn't stop until he finished talking five minutes later. It was Trump's induction to the World Wrestling Entertainment Hall of Fame, an occasion in April 2013 intended to honor a symbiotic history with the promotion that stretched back to 1988. Trump's speech recalled the time he met Andre the Giant at WrestleMania IV. He challenged WWE head Vince McMahon to a "fight." But save for his introduction of his plastic daughter, nothing stopped the crowd from jeering and chanting "You suck! You suck!"

Still, at the end of his remarks, the Manhattan real estate mogul reserved high praise for his newfound Hall of Fame status. "I consider this to be my greatest honor of all," he said.

Three years later, the presumptive Republican presidential nominee's time in pro wrestling has made for some of the easiest metaphors of this election cycle. As a theatre of high volume and hyperbole not so far removed from the bombast of a modern political campaign, pro wrestling is a prism to analyze Trump's taste for rhetorical combat and his blue-collar-white-male populist appeal. Occasionally, Trump invokes the WWE himself. But how much is there to learn about presidential hopeful Donald Trump from his ties to pro wrestling?

It's certainly part of his résumé, right alongside that crappy airline. In 1988, Trump brought back-to-back installments of Wrestle Mania IV and V to Atlantic City, the latter in his now-shuttered Boardwalk casino Trump Plaza. In 2004, Jesse Ventura interviewed Trump ringside at WrestleMania XX, a segment that teased a future with Trump in the White House.

Three years later, Trump got his own storyline. It started on "Fan Appreciation Night" on Monday Night Raw. McMahon was the grumpy wrestling overlord, and Trump was the benevolent rich guy who checked in by video screen and made it rain from the rafters.

Their scripted beef spilled over into the squared circle later that year at WrestleMania 23. The so-called "Battle of the Billionaires" was mostly fought by proxy—Trump paired with future Strikeforce and Bellator fighter Bobby Lashley, McMahon with Umaga—but Trump did sneak in a body slam.

And later that night, before he made a return to briefly "buy" the WWE in 2009, he absorbed a Stone Cold Stunner.

Trump hints at his approach to politics all throughout his WWE exploits. At his induction ceremony, he said of WrestleMania 23: "To this date it has the highest ratings, the highest pay-per-view in the history of wrestling of any kind." Play Mad Libs with a few of the words in that sentence and he could have been talking about his polling numbers during primary season. When he told McMahon "your grapefruits are no match for my Trump Towers," he could have been defending the size of his hands and his dick against Lil' Marco Rubio on a debate stage. In the muscular circus of pro wrestling, Trump fits right in.

Still, he's no intercontinental champion. Pro wrestling is a business of scripted storylines and predetermined outcomes where professionals fill in the blanks. Meanwhile, Trump riffs and improvises without coherence to surround his talking points, so much so that it's painfully obvious when he reins himself in with a teleprompter. He's too flighty to stick to a script anyway: consider that his meal ticket to the 2011 White House Correspondents' Dinner (where President Obama ripped him to shreds) came from the Washington Post, from whom he pulled press credentials last week. And instead of being a walking chemistry experiment like the rest of the WWE roster, Trump doesn’t even lift, bro. "All my friends who work out all the time, they're going for knee replacements, hip replacements—they're a disaster," he told the New York Times Magazine last fall. Instead, he equates talking to crowds of admirers with exercise.

The strangest part is that The Donald somehow seems more likeable in the context of pro wrestling than he does in the race for the presidency. Of course, when your political appeal is based around pandering and pettiness, xenophobia aimed at the American melting pot, thin skin for critics, and the cannibalizing of a low-information electorate, all in the guise of bucking convention and The Establishment, it's not hard to be more likeable in any other setting.

But by many accounts Trump really is nice enough apart from his public persona, the kind of guy who'd sooner dump dollar bills on your head instead of run a set of clippers across it. Court Bauer, a former WWE writer who helped script Trump into the "Battle of the Billionaires" storyline, said that Trump "was fantastic to work with." In front of crowds of antagonizing spectators, Bauer told NPR that he was a natural. "Some people thrive off of it, some people it eats them alive. And he certainly didn’t have any anxiety going out there, he seemed very confident whenever he'd go out there." Taking a Stone Cold Stunner? Trump was up for it from the start. He even offered to yank on his own hair to prove that it's real, Bauer said.

And there's the lesson from Donald Trump's WWE past that applies to his political present: put him in front of a crowd—adoring, jeering, whatever—and he'll do just about anything.