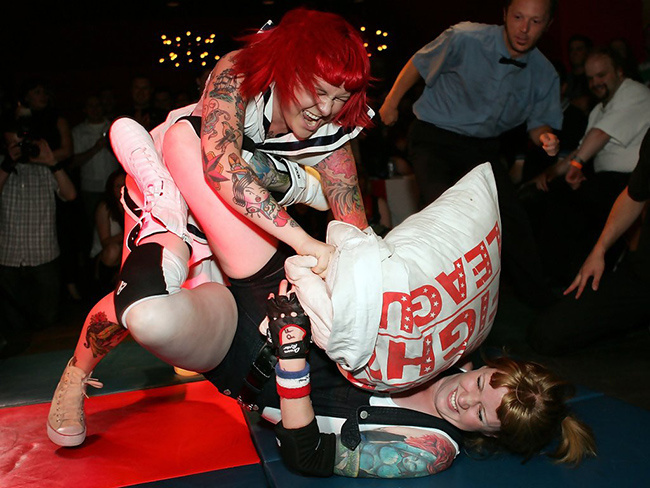 Legend has it that blues guitarist Robert Johnson met the devil at a crossroads and sold his soul for musical talent. I had a similar moment in a hollowed-out warehouse “event space” in a Toronto microbrewery six years ago. That was when I sold my soul for a gi.

A month earlier, a group of semi-nebbish bros had contacted the Pillow Fight League, an women’s-only competitive fighting league I was involved with in the mid 00s, and asked if we’d be interested in holding a few fights at a bachelor party. The offer had left us a little divided, both amongst one another and within ourselves.

Despite the sort of feather-flying, negligee-tearing fun that the name might suggest, the Pillow Fight League was never that kind of league. Even in its infancy, when it started as a comic interlude performed by burlesque dancers during a New Year’s Eve concert thrown by PFL founder Stacey P Case’s band, it was more about teasing and titillating brains than any other organs that guys have been accused of thinking with. By the time Stacey turned his joke into an actual competitive league, the PFL was about as serious as pillow fighting could possibly get.

When my friend and fellow music writer Dan “The Mouth” Lovranski, the official announcer of the PFL, first approached me about joining the burgeoning league in early 2006, I fell in love with the concept instantly. The pro wrestling fan in me loved that they were going with rasslin’-style personas, storylines, and spectacle. The budding MMA lover in me was intrigued by the fact that the actual fights would not be predetermined or scripted, that we would be fighting with actual moves from MMA and boxing, albeit with pillows incorporated “at the point of contact” as specified by the rules. And, as a smart aleck young woman, I loved that we’d be cleverly toying with and eventually destroying every dirty old man assumption that had ever been made about young girls tossing pillows at each other, giggling and rolling around in their nighties.

I showed up for the league’s second round of auditions in a Kurt Angle “Submit” T-shirt and a Judas Priest belt buckle. I introduced myself as Sarah Bellum the Pillow-Fighting Scholar, cut a promo worthy of WCW-era Chris Jericho and put my test fight opponent in an armbar. It was a poorly executed arm bar, but the very attempt impressed some of the PFL folk enough to keep me around. For a good year and a half filled with fight nights at clubs across North America, shows, television appearances, injuries, adventures, and feuds, I was married to the PFL.

Then I went and got myself a mistress.

It all started as a genuine effort to improve my pillow fighting, as ridiculous as that sounds. I was the smallest fighter in the league and tired of constantly losing because of it. So I turned to Brazilian jiu-jitsu. I’d seen what that martial art's use of leverage had done for the relatively tiny Royce Gracie in those early UFC fights and I wanted in on that action.

So I joined a local BJJ gym and, for the first month or so, my twin fighting passions happily coexisted. Then one day the owner of my dojo approached me in the hallway after class and told me that if I wanted to be taken seriously I would have to quit pillow fighting. And I’d have to get a gi.

I dismissed the notion at first. He clearly didn’t understand how clever the PFL and its roster were and what we were really doing, or at least trying to do. There was no way I was going to leave the smartest and most inspiring group of women I’d ever met in an effort to prove to some uninformed jitz dudes that I was a smart and inspiring woman who should be taken seriously.

By the time the bachelor party offer rolled around, though, I was genuinely starting to question my place in the PFL. Stacey’s increasingly confusing vision for the future of the league was starting to alienate most of us, and I worried that internal conflict and whatever the prize-fighting equivalent of “artistic differences” would be were tearing apart everything I’d originally loved about pillow fighting. My favorite fighters and closest friends were leaving and my heart just wasn’t in it anymore. It was, increasingly, back in the small-scale Octagon at my dojo. And even though I still disagreed with the gym owner’s opinion on the league, I also longed for the post-PFL legitimacy he was dangling in front of my face.

I originally dismissed the bachelor party idea, but I started to reconsider when I saw the amount of legwork and soul-searching Stacey and his PFL partner and referee, Matt “Mullen” Harsant, had put into the event. Both of them had talked to the guys putting on the bachelor party at length about what they should expect from a PFL show--that they’d be getting, as our slogan at the time stated, “Real Women. Real Fights.” That we were serious fighters and should be treated as such. That they should go ahead and get themselves some actual exotic entertainment if that was what they were really after. The bros insisted that they knew what they were getting into and that the definitely wanted genuine Pillow Fight League fights at their party.

Between those efforts and my empty bank account, I decided that there were worse ways to pay for a gi and I agreed to work the event. The show itself was, for the most part, painless. We were prepared for the worst when we walked in and found the boys shooting pucks at photos of the groom-to-be’s exes, but they managed to tame that ugly misogynistic streak long enough for us to cut our promos and fight our fights leer- and heckle-free.

Just as we were getting to leave, though, the best man pulled me aside. He’d determined that I was one of their favorites and he wanted to tip me because of it. I never once looked at his face as he pulled a bright red stack of Canadian fifties out of his pocket and started to peel them off for me. I just started calculating the BJJ gear I’d be able to but with my slightly slimy money: the gi, the belt, the shipping and customs costs from Brazil.

“Thanks,” I said with a weak smile that probably made him hate me almost as much as I did at that moment. “You should really come see one of our full shows. You’ll have a great time!” Then I ran home and ordered a salmon pink KF gi.

When my gi finally arrived, I put it on, looked at myself in the mirror, and knew that it was all over. So I e-mailed my resignation to the PFL. I attended one final show as a ref and that was it.

Once again, I refused to look back. I threw my extra time and effort into BJJ and Muay Thai, the league eventually fizzled out, and I forgot all about Sarah Bellum. I wasn’t ashamed of my time in the PFL. I wasn’t even particularly bothered by the bachelor party incident anymore. I was far too excited about my current hobbies to want to dig into the past, even a past as ridiculous and anecdote-ridden as mine was. So I simply stopped talking about the PFL. Eventually, I stopped thinking about it, too.

This past spring, though, Stacey P Case resurfaced in my life and started floating around the idea of one final PFL reunion show. I agreed to be a part of it.

I’ve been out of my semi-serious MMA training for a few years now and out of my MMA shape for about a year, but I figure this is my chance to make a semi-serious go of it with the old pillows. Over the next couple of months, I’ll be digging out my precious bachelor-party-funded gi (and, I hope, eventually digging out my martial arts abs from under their current layers of neglect and sugar), hitting the tatamis, and finally applying my BJJ skills, as rusty as they currently are, to pillow fighting. If it all works out, Sarah Bellum will become the Rocky Balboa of pillow fighting. At the very least, I hope I finally get a chance to make good on that shitty armbar that started it all.

I Wore a Speedo to My First MMA Fight