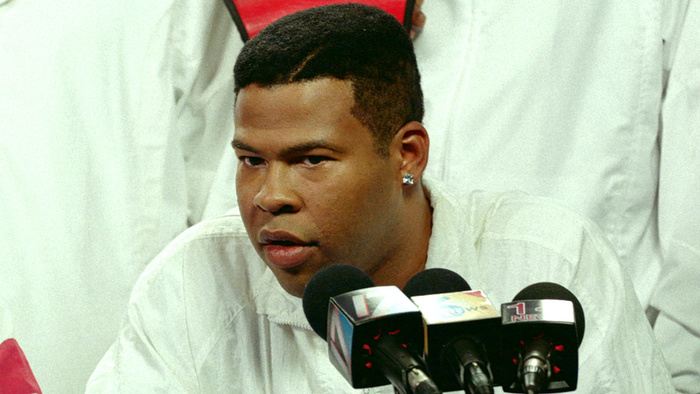 In a brief exchange before throwing to an action film parody in the forth episode of the second season of the beloved sketch comedy series, Key & Peele, Jordan Peele declares Muay Thai his jam.

“Do you like Muay Thai?” Keegan-Michael Key asks his partner.

“No, I’ve been learning,” Peele retorts, making goofy sounds and launching into a set of decidedly un-Muay Thai moves. “I’ve been practicing some of my techniques.”

It’s a small, throwaway bit, inconsequential and forgotten enough that I couldn’t even find a good YouTube clip of it to share with/ foist on other people. But when I was watching that display of self-aware enthusiasm and posturing as part of a Keanu-inspired revisitation of the series, I had a minor epiphany: there’s really no other comedian who approaches fight fandom the way that Jordan Peele does. And there’s definitely no one funnier when it comes to both celebrating and skewering combat sports.

There have been flashes of fight-inspired brilliance in comedy in the past. In Living Color managed to consistently skewer boxing and karate over the course of its five season run with a certain amount of fondness. The Kids In The Hall took a delightfully surreal stab at the history of boxing on their classic self-titled series, and Bob Odenkirk, David Cross, and company took a similarly weird and amusing look at MMA in their 2015 Netflix series With Bob And David. Silicon Valley did great things with the UFC last season. But most of these skits and shows, save for the Newsradio episode that pitted Joe Rogan and Andy Dick’s characters against each other in an “Ultimate Fighting” match, come from an outsider’s perspective. There’s a thoughtfulness and a grasp of the weird nuances and quirks that come with being a fight geek that’s missing from all of them.

Peele, an avowed mixed martial arts fan who’s been known to tweet silly jokes about the sport and defend it from ill-informed detractors on sports podcasts, is right in the middle of the combat and comedy Venn diagram, though. And his perspective is often hilarious.

In Peele’s work with Key (and with their fellow MadTV co-star Bobby Lee) he explores the eccentricities and hallmarks of the fight-loving lifestyle that the uninitiated either don’t grasp or haven’t even considered and satirizes them without ever condemning or dismissing them. The absurdity of trash talk, the aspiring tough guy’s disconnect between talk and action, the weird discomfort over the homoeroticism of combat sports, and the gleeful overestimation of abilities that comes with being an overeager white belt or YouTube warrior are all attacked with an accuracy that would put a world-class striker to shame.

Let’s take a look at some of Peele’s best fight skits to see what he does, and how he does it so well.

OK, so fight appreciation probably wasn’t entirely necessary for this one, but there’s still an undeniable fondness apparent in Peele’s decent portrayal of the boxing great against Key’s Jordan in this 2013 installment of the Epic Rap Battles series. And that Nike burn is darkly hilarious.

Key & Peele had a lot of fun poking at the fragility of the male ego when it came to both starting and finishing fights over the course of their series, like the season two episode featuring Key as a new dad who starts talking tough when he realized that no one’s going to attack him with a baby strapped to his chest, or Peele’s season five (or four b, if you prefer) tough guy who would start something at a bar, no really, if only his friend weren’t telekinetically holding him back. But this Django Unchained bit took their observations to a whole other level.

Only someone who’s dedicated hours upon hours of their life watching mixed martial artists hype their fights would understand – and celebrate – how ridiculous and bizarre the whole process can get sometimes.

Key and Peele have been flirting with the homoeroticism and barely sublimated homosexuality of fighting since their MadTV days with their sketch about a street brawl that turns into something else.

But that’s nothing compared to what they did with this boxing press conference from their own series, in which the trash talk takes a surprising romantic turn. It might as well be a Jon Jones and Daniel Cormier altercation.

This sketch from MadTV, in which Peele and Bobby Lee shoot a deodorant commercial with UFC legend Ortiz might as well be called “A Portrait of the Martial Artist as a Three Stripe White Belt.”

'Silicon Valley' Takes on the UFC