Will Georges St. Pierre Save the 'Kickboxer' Remake? 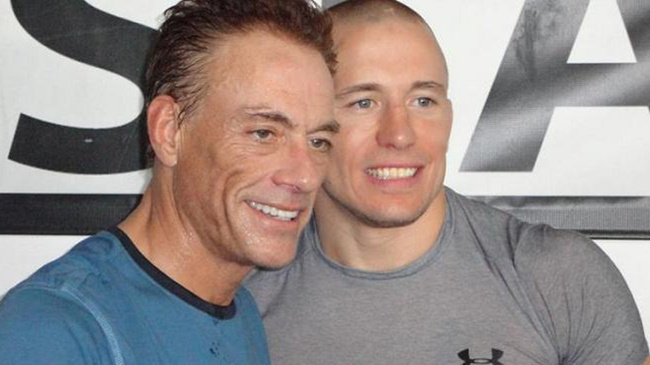 I can’t prove it, but I’m sure the plot for Kickboxer came about like this: Two guys got together in a conference room with a whiteboard and a couple of dry-erase markers. One of them scribbled, “brother breaks his back” on the left side of the board. One of them scribbled, “fight with broken glass” on the right side. They stared at the board for a while. They stared some more, and before they knew it, it got late. One of them said, “Fuck it, we’ll figure it out when we start filming.”

And from those humble beginnings that I’m completely making up, Kickboxer, the most crucial non-Bloodsport item on Jean-Claude Van Damme’s resume, had a story arc. We’re talking about this artifact now because on Monday, it was announced a forthcoming Kickboxer remake featuring longtime UFC welterweight champion Georges St. Pierre, and WWE star and MMA tourist David Batista. The specifics of the casting are scarce—we know that St. Pierre isn’t in the lead, because that maybe-dubious honor goes to stuntman Alain Moussi—and the arc of the plot hasn’t been revealed.

Back in 1989, when the writers filled in that blank space between the beginning and end, it looked like a pretty standard, clichéd, illogical revenge tale. An obnoxious American kickboxer (played by Dennis Alexio, a legit kickboxer who reportedly turned down $50,000 to be in the first UFC) decides to ply his trade in Thailand against Tong Po, a 10-foot-tall, pony-tailed champion, who can demolish pillars in his warm-up room without regard to whether that might make the roof cave in. The American gets outclassed and unjustly beaten into paralysis. In the aftermath, his brother—a fresh-faced kid who seemed like he was just too damn precious for the fight game—vows revenge. A few training montages and a weird, debauched afternoon in a bar later the brother is ready for battle with broken glass. And naturally, he wins with a dramatic flick of foot to face.

In 2014, it’s pretty easy to poke fun at the obvious failings of a 25-year-old movie. A few weeks back, I watched Kickboxer for the first time since wearing out the VHS when I was, like, 10, and that memory is going to have to fade for a while before I break it out again. This movie hasn’t aged well. And actually, it irritated me in a way I hadn’t expected. It’s not the implausible fight scenes—I can abide and learn to love those. And I can look past the stilted dialogue, the plot holes, and the racial stereotyping.

But I can’t look past the temporal distortion in the movie that insults what it means to do martial arts. Kurt’s training elapses over what must be weeks, maybe months. The only mention of him having any martial arts experience comes briefly, while he’s holding pads for his brother in the park, when he alludes to having trained karate. And then he retreats into the woods like some Southeast Asian iteration of Walden Pond, learns to do a split, and somehow has the pugilistic acumen to beat a homegrown Thai boxing champion. More than that, Tong Po is so threatened by Kurt’s potential that he makes arrangements to kidnap his brother, rape his girlfriend, and assure himself every possible advantage to throw him off his game. And the icing on the cake of implausibility is that a tomb—a tomb!—full of Thais with no incentive to jeer this farang starts some stupid chant in his favor?

I will defend slow-motion spinning kicks until the death, but I can’t stand for this lifetime of mastery in six months or less, or your money back. This isn’t compression of events for the sake of running time. It’s the same current of idiocy that makes someone buy a diet pill or hit up a self-defense seminar at a Kempo karate school, and it does a disservice to what it means to master a martial art. It takes years, decades, of sacrifice and devotion to something whose reward will never be clear to anyone else. Even Jon Jones, a genetic anomaly who learned to strike from YouTube videos and made his UFC debut within a year of MMA training, had a lifetime of legit wrestling experience before he ever threw a punch professionally. Everyone who’s serious has a story about getting beaten up so badly by someone so good they could only get better. That’s what the movie misses, and it would be so easy to convey that on film—the beatings and bruises, and long recoveries.

Let’s face it: The Kickboxer remake is probably going to be mediocre. But please, GSP, make sure everyone puts in the work.

The Night Van Damme Was Nearly Thrown Out of Lumpinee Stadium