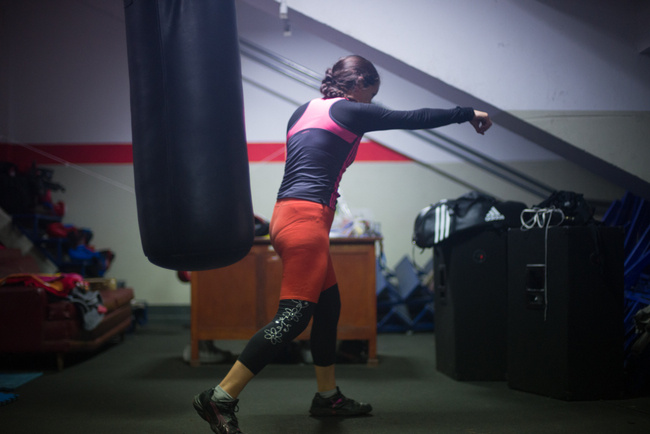 As a woman, the decision to become a boxer is not an easy one. First, it’s not really easy for anyone to become a boxer, as the physical and emotional demands of the sport are high. Second, when social norms are not expectant of women to fight, that entrance becomes even harder. But in Peru, there appears to be a real effort from all corners of society to boost the other sex in the sport, and for the most part, it seems to be working.

Half-a-decade ago, one striking difference I noticed in the boxing scene in Peru was the inordinate number of women training in the gyms. That’s not to say that women don’t have a place in the sport, only that in most of the gyms I had traveled to at the time, I’d find one, maybe two women that would train as serious competitors. But back then in Peru, there was a notable number of women pounding away at the heavy bags and gloving up to step into the ring. Fast-forward five years and there are even more women present, and it seems that both their technique and dedication has advanced as well. 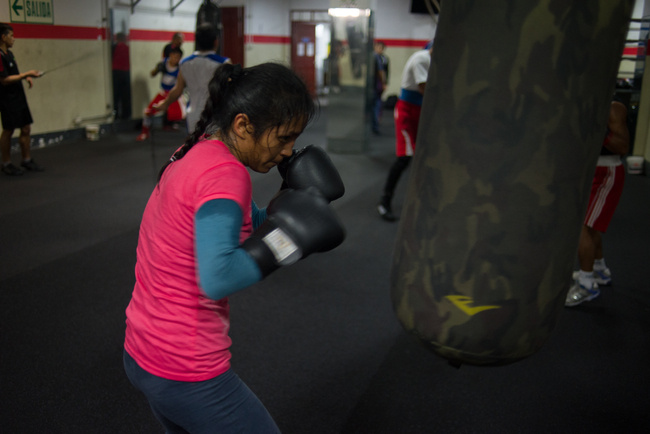 I walk into Lima’s main boxing gym to the sounds of someone blasting left-right combinations against the focus mitts that sound like canon shots. Behind the gloves is a young woman donning a ponytail and a look of fierce determination etched onto her face. In the ring a man and a woman are in the middle of a sparring session, both trading shots with seeming disregard. Down by the ring steps are two women drenched in sweat unwrapping their hands, chatting as they close out their session. I slide by and ask them about their experience.

“A lot of people think that because we’re boxers, we’re lesbians or that we’re butch,” says Lucero Anita Angaspilco, a 17-year-old competitor at the national boxing gym in Lima. “But no, we like [boxing] because we’re fierce. To be someone in boxing, you have to be strong.” 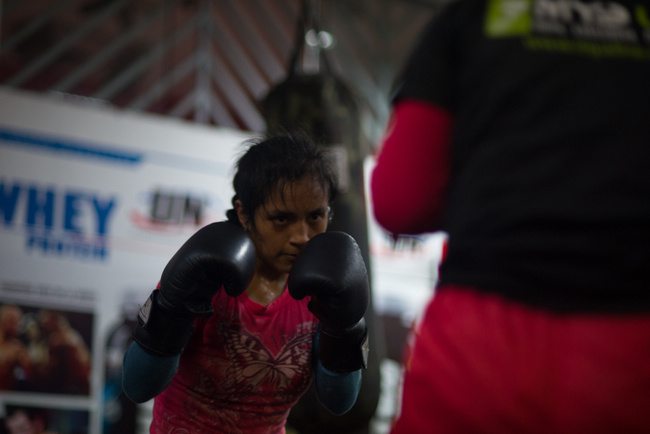 Her teammate Fiorela Giovana Gociochea is standing next to us nodding her head. Gociochea is a fellow competitor who also trains seriously in the sport and goes on to tell me about the benefits she’s found since joining.

“We have a routine, we have our rhythm, and we’re healthier,” says Gociochea. “Boxing is taking me on a good path. If I weren’t in boxing, I’d probably be sitting at home doing nothing.”

Health, focus, discipline, and purpose—the reasons for joining are similar, if not equal, to what I’ve heard from male boxers throughout my travels. Since the inclusion of women’s boxing in the London Olympics Games, there has been a boost in the worldwide participation of females in the sport, though in Peru the trend was growing long before 2012. A large part of that trend is due to the influence of Kina Malpartida, the first world champion of either sex to emerge from the country. Winning the WBA Featherweight title against Marueen Shea in 2009, Malpartida became an instant superstar, appearing throughout the nation on television shows and a number of adverts for a variety of products, from nutritional supplements to beauty supplies to potato chips. Malpartida communicated a different image than how women were traditionally represented in Peruvian media landscape—one of strength and self-reliance, and in large part done in a non-sexualized way. This message quickly caught the attention of a new generation of women in the country. 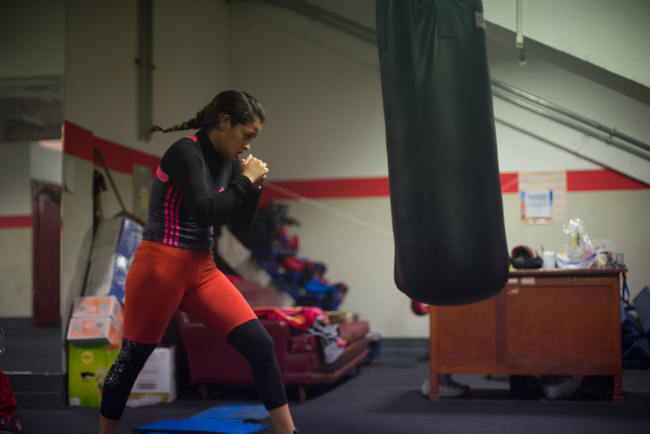 “Kina was an inspiration to us. I felt like she was an example, like it was possible,” says Angaspilco about the influence of Malpartida on her decision to join a sport traditionally dominated by men.

“[Kina] said that women belonged in boxing too, that we’re strong,” Goicochea adds in.

Both Goicochea and Angaspilco are part of the national selection team, a composite of the nation’s most talented fighters brought together in a central location to focus seriously on training and represent the country at international tourneys. This practice is common in all countries with boxing teams taking stake in the world amateur scene, and participating as a fighter often brings multiple benefits outside of the ring, such as academic scholarships, medical care, room and board, as well as the opportunity travel. Because most fighters come from considerably humble beginnings, this opportunity to learn and travel more than likely would not have happened if not for the sport.

One fighter, 21-year old Lucia Valdivia Bravo, told me of her experience in a boxing exchange that took place in Cuba, where she had the opportunity to meet fighters from the North America, Indonesia, and of course, Cuba. There she was exposed to different languages, different cultures, and learned the diversity of places that were not her own. What she said surprised her most, was learning Indonesia to be home to the largest Muslim population in the world, and that not everyone from the country was fair-skinned. In this sense, being part of the sport expands the general understanding between people. 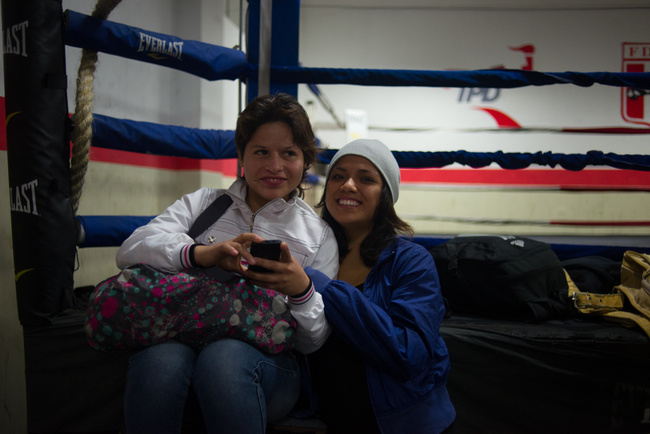 With the influence of Malpartida and the expansion of women’s boxing in general, these benefits have opened to women in the country, and the door has seemed to have opened even wider since my last visit. When I first came to Peru, there was only one woman on the national selection team, but today there are six, with promises of more in the future should the trend continue.

That one fighter on the team five years ago is Rocio Gaspar, now an accomplished professional in her own regard. At nine-wins and no losses, she’s currently being groomed to be the next Kina Malpartida of the country, and has a strong promotional and training team behind her. When I take a closer look at her record, however, her fights have been largely against unproven competition, with her opponents’ combined record coming in at 3 wins and 29 losses. Four of her fights having also been against debut fighters. To be fair though, her record is less of a promotional team intentionally padding a record, and more of a symptom to an overall lack of available opponents, a recurring obstacle in women’s boxing. 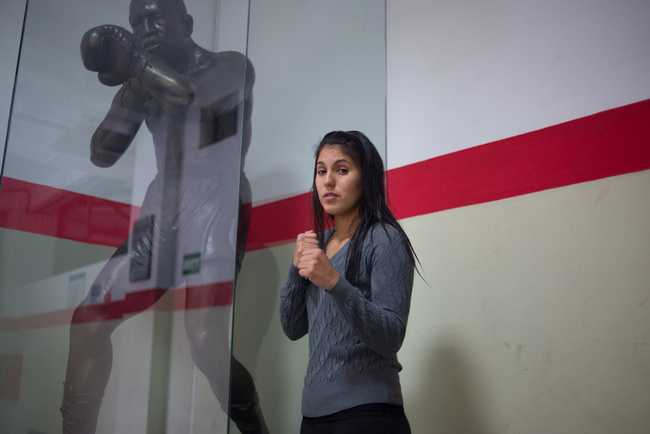 Since its inception, women’s boxing has been tepid at best. The reasons for this are many. Some traditionalists, both moral and of the sport, believe that women have no place inside of a boxing ring, and that taking part in combat is “unladylike”. Others just don’t think of women as equal athletes to their male counterparts and therefore lack the desire to watch a bout between two female competitors. These sentiments enact a chain-cycle of obstacles to the growth of women’s boxing: less interest means less money, less money means less incentive for competitors, less competitors means less matches, and less matches means less interest. Yet when I mention this to Gaspar, she responds with a more hopeful view about the landscape of women’s boxing. 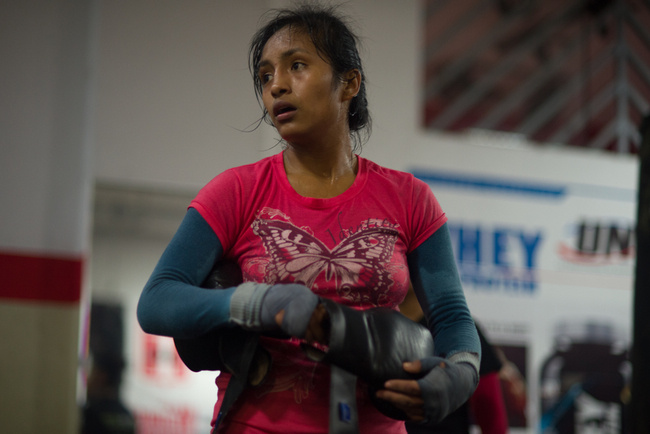 “I don’t think boxing is ‘only men’ any longer. Now there are a lot of very good women champions. There’s a growth in the market of women boxers. In Argentina there’s twelve champions, in Peru there’s two, in Chile there’s currently one. You can’t say that boxing is only for men,” says Gaspar.

The “two” Gaspar mentions, however, no longer includes the famed Malpartida. Claiming a desire to pursue other ventures and needing the mental and physical energy to be focused elsewhere, Malpartida retired from her featherweight throne in January of this year. But despite stepping down from the ring, she has continued to be a welcomed presence in the public eye, most recently featured on a Peruvian-style “American Gladiator” television show, and also started a candy bar line called “Kinaz”. I ask Gaspar her thoughts regarding the former champ’s recent departure from the sport, and the comparisons being made between her and Malpartida, wondering if she plans to take a similar path.

“Everyone has their own dreams to complete. Everyone searches for their own story, right?” Gaspar asks rhetorically, making no real judgment on Malpartida’s decision. “I think when Kina went out and won the championship, she told the youth that they could go out and realize their dreams. It’s not important how long it takes; we’ll eventually get there. I think that’s what she told the men and women in the country. She’s a pride of Peru, not just for the women.” 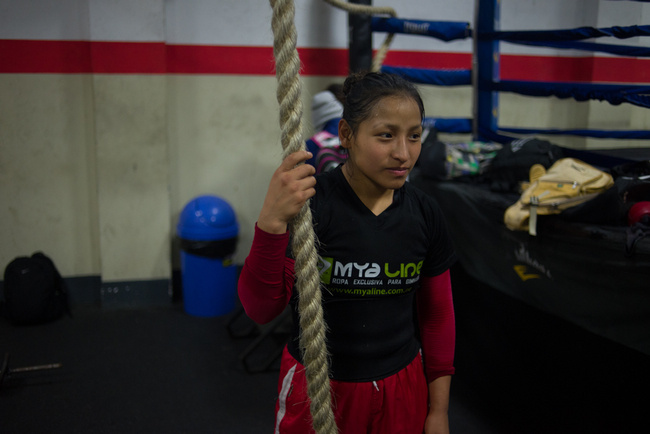 It has long been said that sport is the social equalizer, and that the traditional identifiers of race, sex and class disappear in the arena, perhaps even more so in the world of combat sports. There is something about fighting that reduces a person to the core of their existence, and I suppose training alongside that essence day-by-day reduces all the barriers that have been created to separate us. Gaspar echoes similar sentiments when the topic is mentioned.

“When we’re training, we’re opponents. There’s no difference in sex. I think the training for everyone is equal because it’s a question of ability,” says Gaspar. “And outside of the gym, people treat me like family, like a companion.”

While Gaspar’s response fits an idealized view of gender equality, and I largely agree on her views inside the gym, I do question how much has changed for her and other women outside of it. When you type Gaspar’s name into any Internet search engine, a variety of pictures of her posing in boxing gloves with leopard-print bikinis and short-shorts appear in the results. This is not to say there is something wrong with women publicly expressing their sexuality, or that they do not have the right to do so, but the getup is closely reminiscent of “foxy-boxing”, which uses women and fighting more as a novelty to satisfy men’s fantasies, rather than presenting women as serious contenders. While Malpartida was never really subjected to similar media imagery, it is also worth noting that she didn’t gain notoriety until after she won a major world title, and that the developing years of her career were spent training between Australia and the United States, claiming that Peru didn’t support her career. I just wonder how different the course is going to be for a fighter like Gaspar, and how much that type of imagery might add to the objectification of women in what is already considered a “machismo” culture. 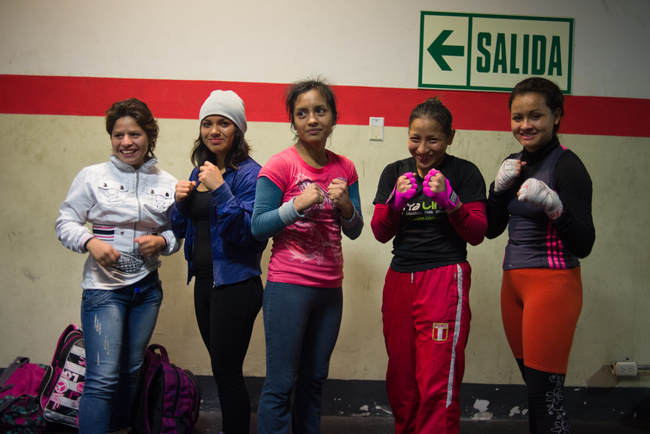 Writing an analysis on women’s boxing as a male is no easy feat. Much of boxing is embedded into larger cultural and societal norms, and the reception of a fighter is ultimately reflective on how we’ve been conditioned as a society. The same goes for a writer’s analysis and the unconscious positions of privilege that influence their words. But what I can confidently conclude is that the boost in women’s boxing is a sign of progress. Malpartida and Gaspar’s ascension in the societal ladder has been done through non-traditional means for a woman in Peru, and the more attention and legitimacy a woman brings by fighting better in the ring, the more people are forced to rethink their stance on gender roles. I suppose one could argue over the physiological differences that attribute to a gap in fighting ability between men and women, and therefore conclude women are the inferior fighters, but I will say that considering all the social barriers women face to even have a mere presence in boxing, their will and determination have already been proven equal, if not greater.

A Cameroonian Boxer in Rio