By Christopher Rini as told to Josh Rosenblatt 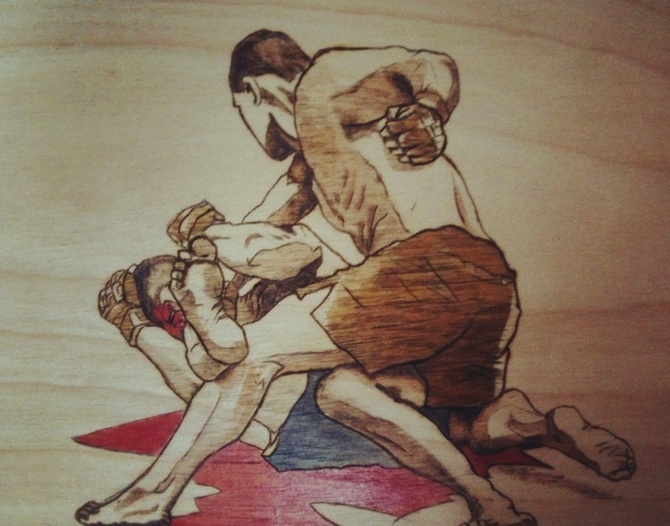 [Ed. Christopher Rini is a New York City-based artist who recently combined his love for figurative wood-stains with his love for mixed martial arts. We spoke to him about how he came up with the idea, how he makes it work, and where he hopes it all leads.]

I’ve been an artist forever. I was in band for years but when I got married four years ago I quit playing in bands and I just focused on artwork, painting, and I was doing okay. Then I had this breakthrough — I had been doing ink and wood stain and I decided I just wanted to do wood stain. I started engraving, burning the wood, anything to keep the stain from running through the grain. I made big, elaborate architectural pieces, like views of New York City seen from a helicopter, where there is no horizon line, where the city covers the entire canvas. 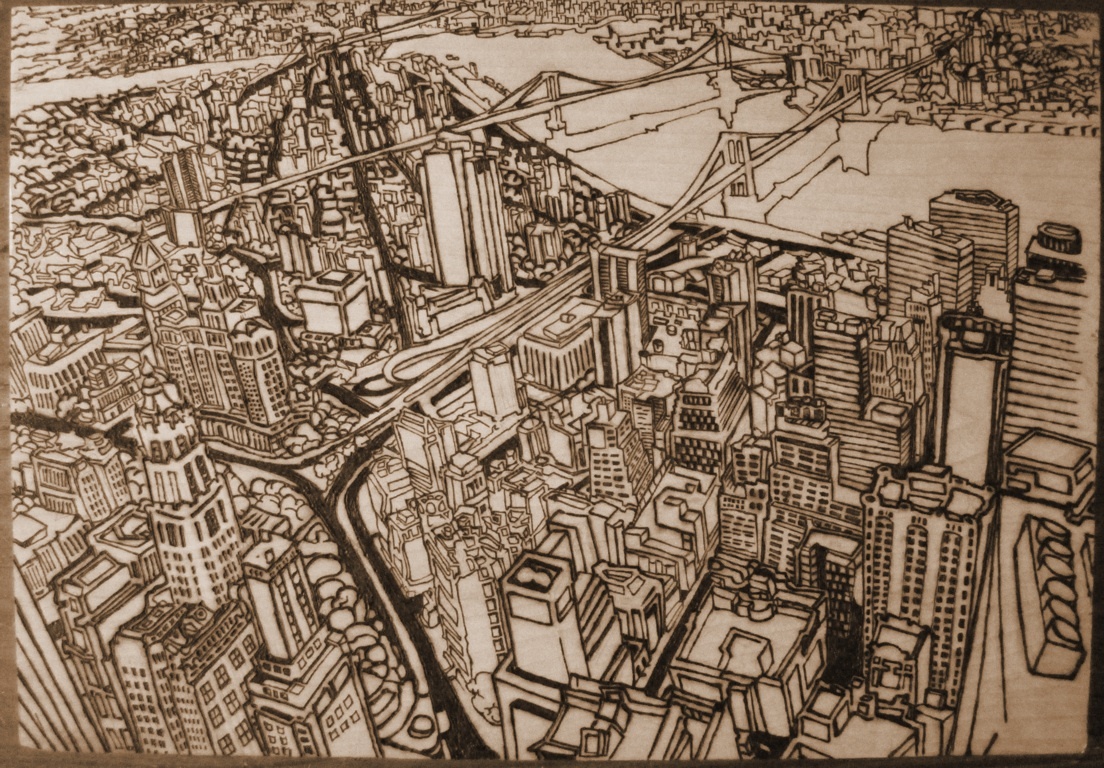 Then about a year and a half ago, I got divorced and I went on this Vipassana retreat, this meditation retreat where you live like a monk for 10 days. I’ll be honest: It’s torture. You meditate for 10 hours a day, for 10 days. You’re completely silent. You don’t talk, you don’t read, you don’t draw, you don’t even make eye contact. You don’t do anything. It’s not an enjoyable experience but it’s a rewarding one, and one of the things I thought while I was there was: When you’re a fine artist and you’re doing figurative work, you need a reason to be painting the figure. It hit me that MMA is a growing market, it’s a real thing that I care about. Doing wood stain pieces of MMA fights would be a way to do figurative work and be relevant in an age of conceptual art. I started this past June, right when I got back from the retreat. I made some small pieces then the first big one I did was the one of Nate Diaz and Donald Cerrone. That was the first one where I was re-creating flesh tones just using wood stains: 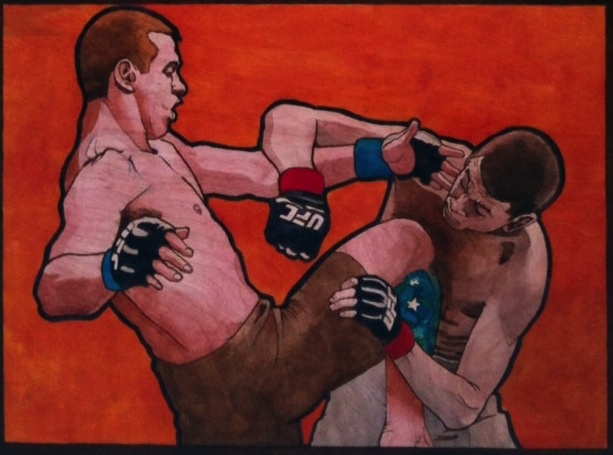 I’m straddling the line between fine art and commercial art; I’m trying not to get too fancy or arty about it. I’m trying to appeal to people who are fans of MMA. People tell me I should do the famous Ali/Liston photo where Ali is standing over Liston waving his fist, for example, and I tell them, “But it’s done. That’s a boxing icon that already exists. I’d just be riding the coattails of something that is familiar.” I feel like the only way I can really do something for myself ... you have to be the first person to do something; you have to really make a mark. I really just want to create iconography of a sport that’s new.

I do the drawing on paper first. From there I get it blown up to the size of the wood on carbon paper or graphite paper and trace it out. It’s all about proportions and balance in that stage; I need their feet to be on the same plane so the gravity and the balance of what they’re doing is realistic. I’ll trace the outline in pencil then burn over the whole thing. I use a bunch of different wood burners that are similar to soldering irons. I use those to basically dig trenches so that I can isolate chunks of wood and stain them without it running all over the place. Wood stain will just bleed into the wood grain itself, so you have to carve everything into the wood. I use pints and quarts of a dozen different shades of brown. Then I found this stuff called aniline dye, which is commercial wood-dyeing stuff that they use in set-building. Then I stain it. I apply stain, I wipe it away, I apply stain, I wipe it away. Over and over. I’m totally okay with spending 40 hours on something, 100 hours. I've become very disciplined in my early middle-age. 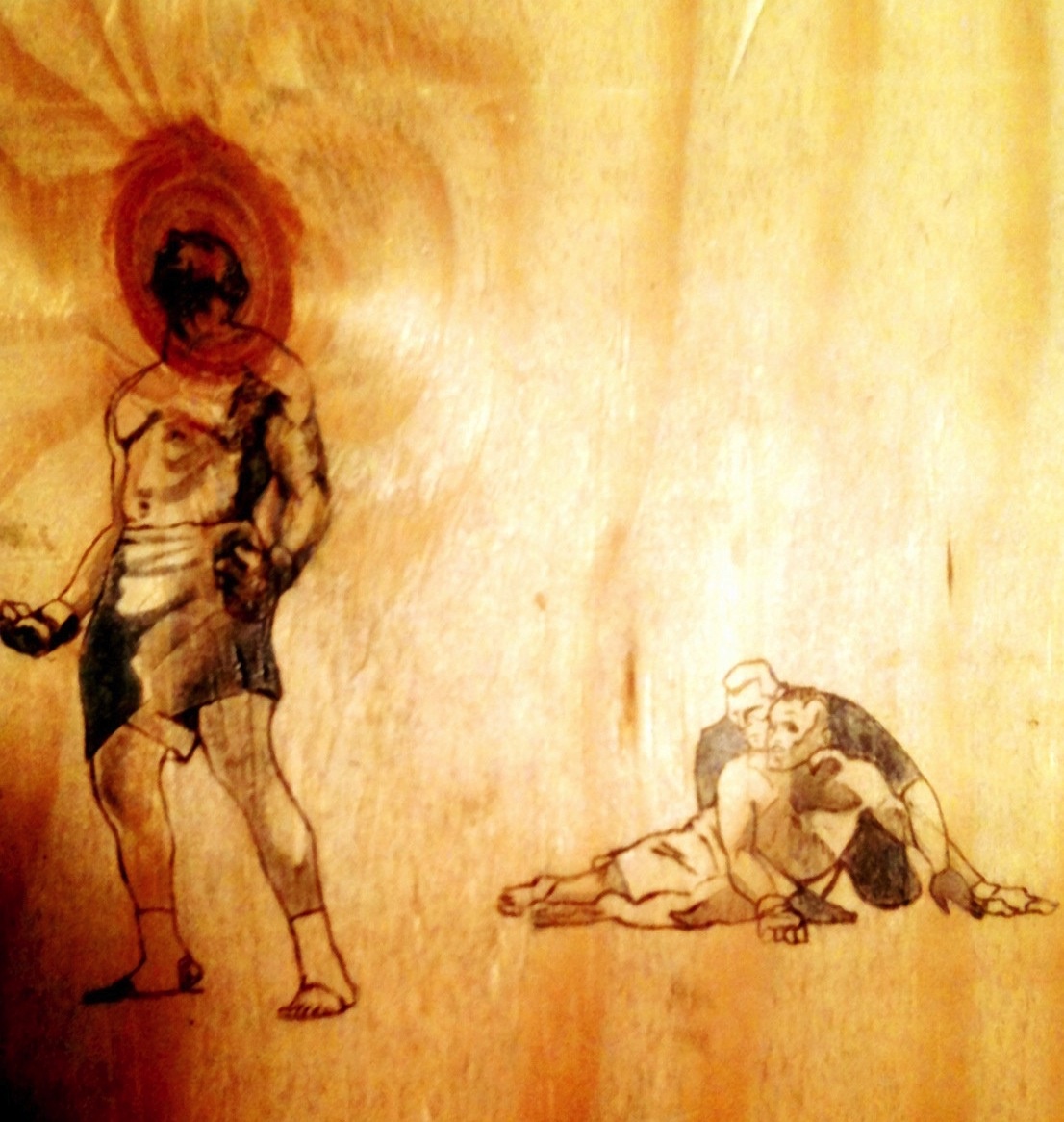 I've been into wood for years. I love the variety of the grain and the patterns that can emerge. You either use the grain for the benefit of the piece and make something cool out of it, or you can just let it be the texture of the piece. For most of my MMA pieces I just let the wood be there. But for the piece I did of Quentin Jackson after knocking out Chuck Liddell (above), I used the knot to add something to the picture. It’s one of those things where you want to take a piece of wood and make it part of the artwork.

I find a certain similarity between making woodwork and MMA. They're both physically taxing. I have carpal tunnel in both hands, and wood engraving is not the best thing to do for me. I think about the first fight between Cain Velasquez and Junior dos Santos: Their first fight lasted 64 seconds. It reminded me so much of when you go to a gallery or a museum and you see a piece of art. Somebody spent years months, weeks; dozens, hundreds of hours on this, and you look at it and it and digest it in 30 seconds, a minute, five minutes even though someone put a big chunk of their life into it. And I felt like the fight game is so similar. These guys spend months away from their familes at training camp preparing for a fight, and that fight can be over in a minute. You get judged only on that minute.

I like that the woodwork is kind of grueling. There’s a real physicality to it; I even sometimes go to a lumber yard and pick through their scraps, and it's fun trucking around a piece of wood, and you have to get that on the Number 6 train somehow. And people hassle you or they always have something to say. And at the end of the day you have to truck through it all, and you make your work, and there’s a chance no one will see it. But I don’t mind. 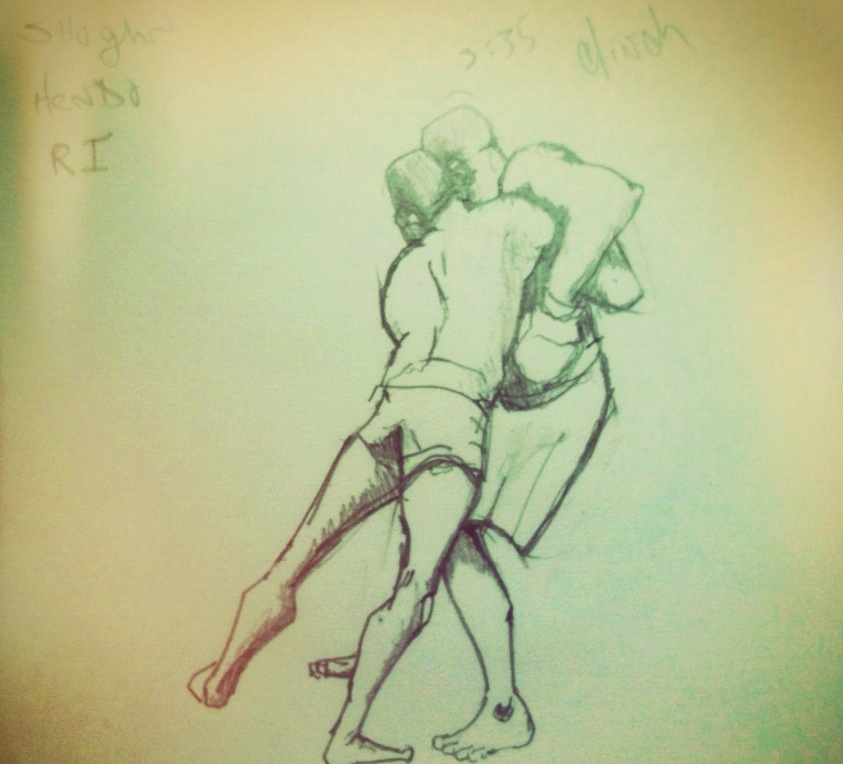 This sketch I did for of the Dan Henderson/"Shugun" Rua fight is perfect. It's called "The Clinch." There’s literally gravity to it. There’s a man leaning on another man. They’re forcing each other’s weight onto each other. There’s a real physical and thematic tension going on. I decided it was perfect and didn’t need to be adjusted, So I enlarged it and am using it as a section of new large piece I'm doing based on that fight. I have a real shitty copy of UFC 139 and I just paused it until I found a nice pose and then I just drew what I saw. 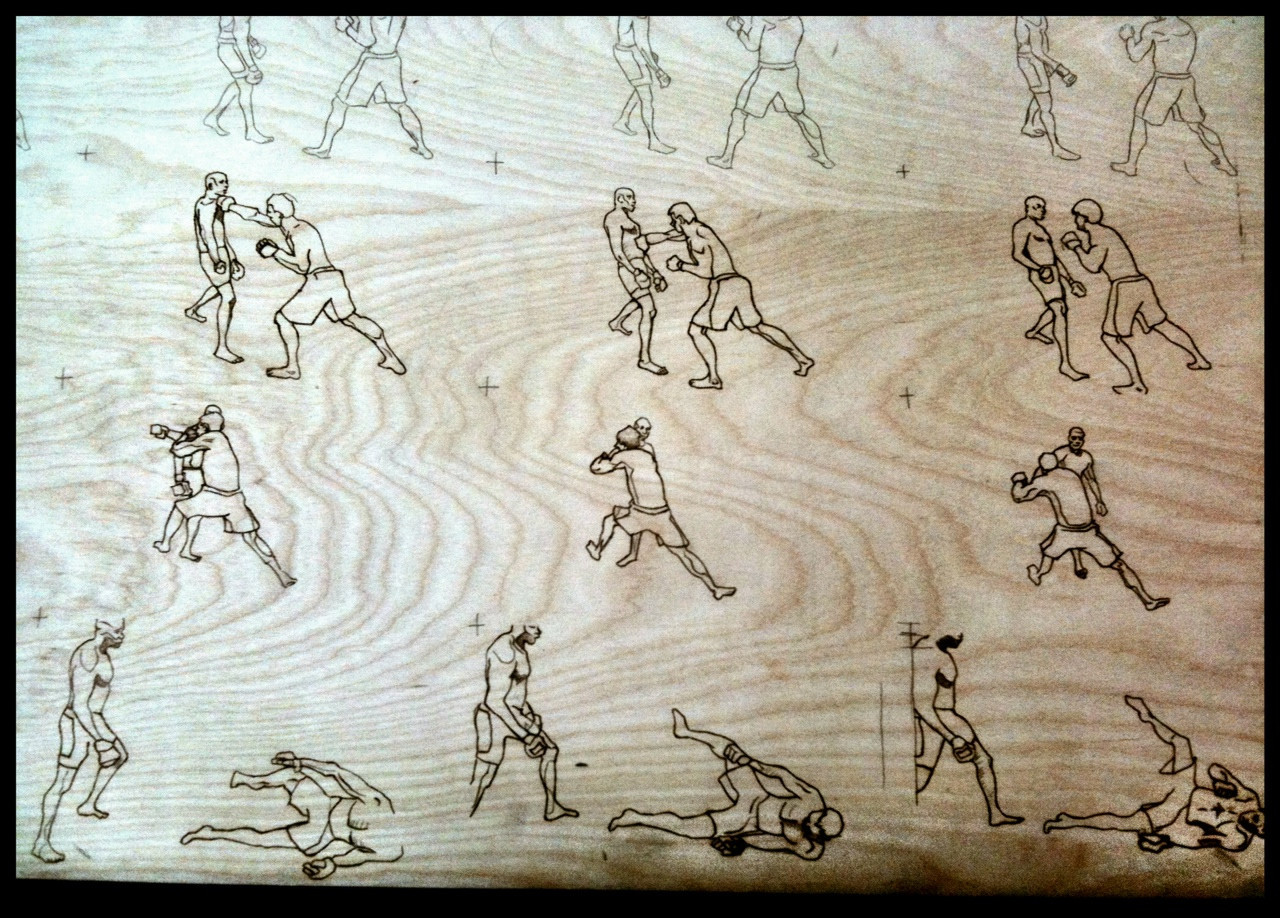 I wanted to make a portrait of somebody great. When I started I was doing lesser-known fighters. But it’s Babe Ruth that people want to see, Michael Jordan. So I had to do an Anderson Silva piece. But I just thought that there’s no way I could make a single picture where you could encompass what he does, what's so amazing about him. I got inspired by that famous early photo of a rider on a horse. There’s something unbelievable about the truth of motion, the reality of it. This is what Silva does. This is what happens. People throw punches and he just dances all around them. And that’s what so amazing about him: The otherworldly way that he moves is more important than anything else. It’s not about one moment. With Silva, it’s more about his interactions with other people and the way they try to impose their will and he’s just beyond it. I didn’t feel like there was a single image that I could make that would be a good portrait of him. So I thought it would be cool to go big, so I made a big animation.  I found a gif and took each frame and made jpegs and laid them out in grid, then had a giant printout made, laid it onto a six-by-four-foot piece of wood and animated it into my own gif.

I really want to work in the MMA world. I don’t want to make fan art. I don’t want to be a hanger-on. I have pretty lofty goals. I think about the baseball Hall of Fame in Cooperstown. Those bronze plaques: That’s it. You say Cooperstown and that’s what people think about. I can stain wood and it’ll look like bronze and it’ll look amazing because it has that stain underneath. I can make the UFC Hall of Fame plaques. That was the impetus for this. It sounds kind of silly, but why not aim high?