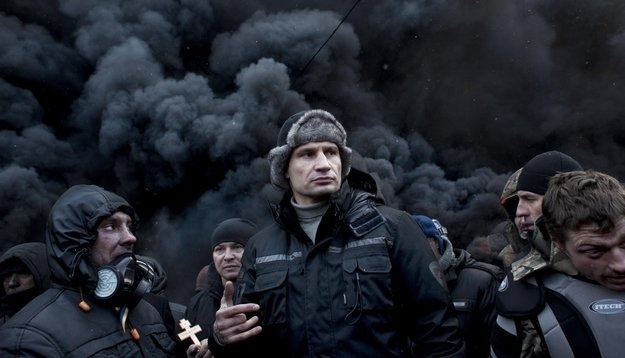 Today is a crucial day.

Bloodshed continues. Authorities resort to bloody provocations in plain view of the world.

Armed criminals were unleashed to beat people to show that there is some conflict among people.

But these plans are doomed!

There is a short list of people who demonstrate a high level of athletic perfection and intellectual and social prowess. Muhammad Ali, Curt Flood, and Bill Bradley might come to mind while thinking of what it means to be a true “People’s Champ” in this regard, but Vitali “Dr. Ironfist” Klitschko has set the bar even higher this week as he leads the deadly fight for reform in Ukraine.

While remaining active as a professional boxer, the dominant heavyweight, and Ph.D., has been a political activist for the past decade. After two unsuccessful runs for mayor of Kiev, he was elected into the Ukrainian Parliament alongside 40 others of his political party, the UDAR (Ukrainian Democratic Alliance for Reform), an acronym meaning to “punch” or “strike” in English.

This December, when his native country started to look like it might slip into civil war, the 42-year old Klitschko announced he would vacate his title to focus on becoming the next president. Vitali ends his career with a spectacular 41 of his 45 wins by knockout, and he will be remembered among the best strikers of all time. Upon retirement, out of respect, the WBC crowned him "champion emeritus,” -- granting him the right to challenge any title-holder at any point in the future.

Vitali Klitschko is now one of three main political leaders of the pro-western opposition who shut down the Ukrainian parliament last month and who continue to fight for control of the capital city of Kiev through bitter demonstrations and occupation -- calling for the resignation of the country’s corrupt pro-Russian authoritarian leadership. Yesterday, Vitali helped broker the second truce between the government and protestors, whose recent clashes have left dozens of people dead and hundreds seriously injured.

The massive protest, which includes thousands of people from various political factions, first materialized after the current president turned down a treaty with the European Union in fear of losing close economic ties and a $22 billion dollar assistance package with Russia. The protest then reached a tipping point when the government responded to the civil-demonstration by passing draconian anti-protest laws restricting free speech, and had riot-police raid their camp in Kiev’s Independence Square. Not willing to give up, the protesters rebuilt their destroyed tent city by constructing walls made of bags filled with snow and rebar, and continued to take control of state buildings. 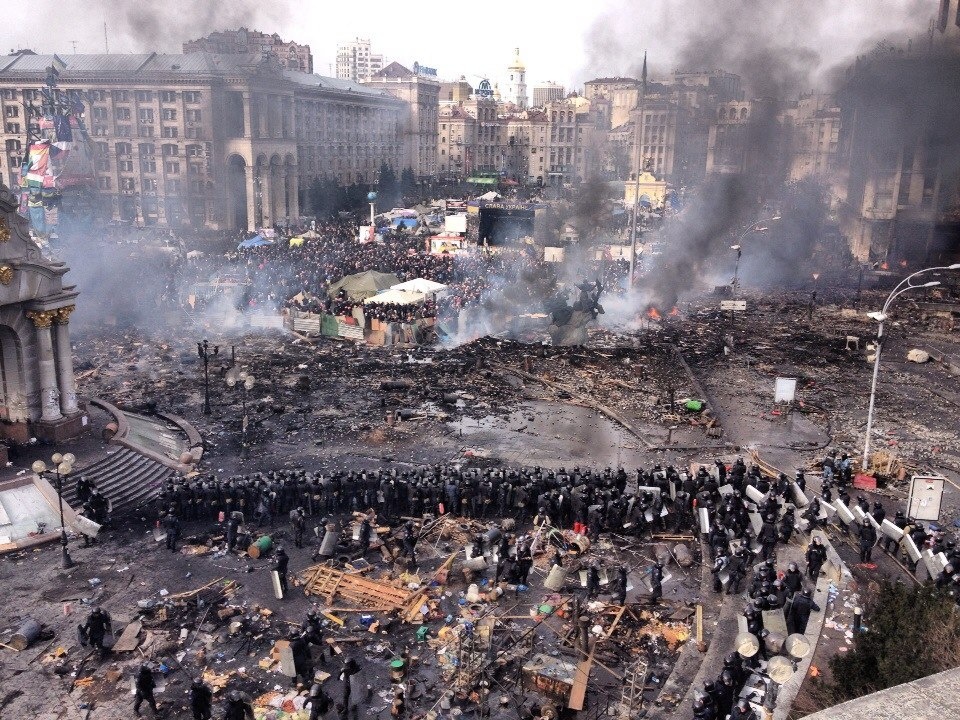 In the beginning of the movement in December, Klitschko showed up on the front lines with a less aggressive leadership style than one might expect from a fighter-turned-political leader and urged the more radical protesters not to invade the president’s office. The crowd chanted his name as he argued with Right Sector, the nationalist paramilitary group involved in the movement. When he showed up in the square a month later and tried to stop a similar group from attacking the police, protestors had grown so frustrated with the continued delay of his attempted political negotiations that they ended up spraying him with a fire extinguisher. 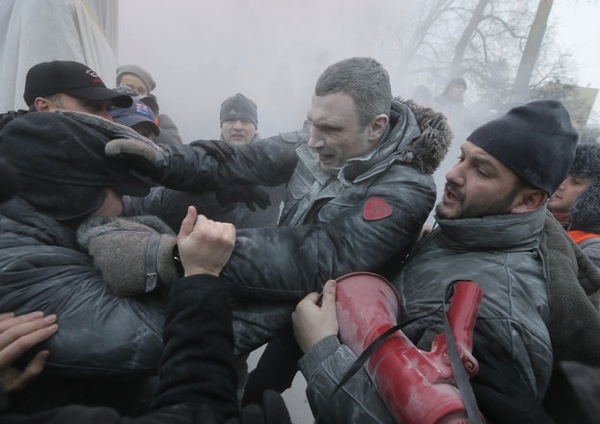 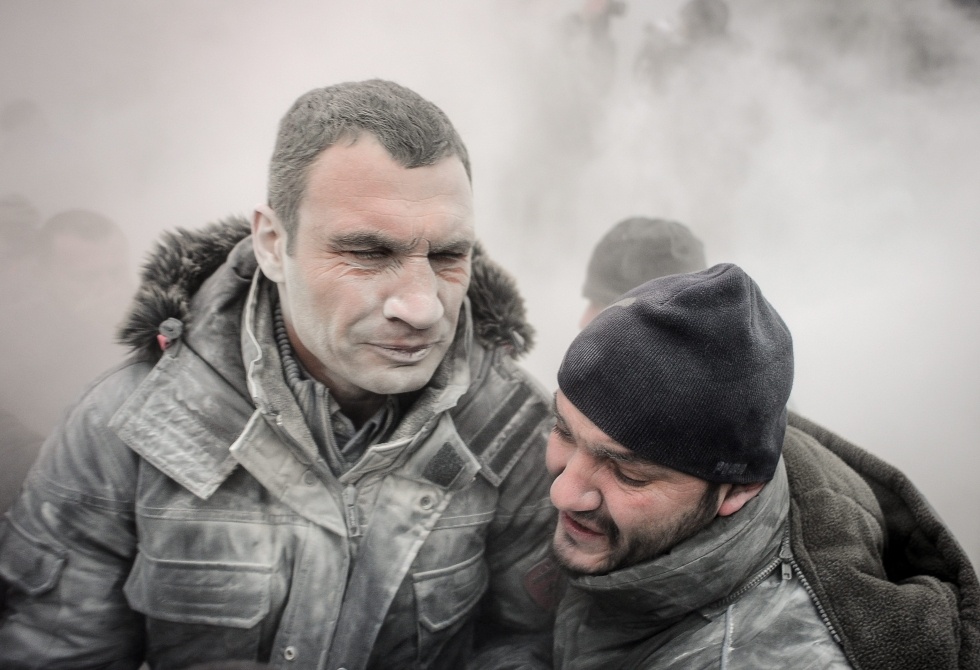 Still, on February 18th, at the end the most violent day, he appeared again to lead in Independence Square after fierce fighting left dozens of people dead and encouraged demonstrators to hold their ground. "We will not go anywhere from here," he told the crowd. "This is an island of freedom and we will defend it.” The next day, Klitschko successfully negotiated to a cease-fire with President Viktor Yanukovych but the agreement collapsed just hours later and the death toll climbed to 77.

"Blood is shed on the streets of Kiev," Klitschko said in a video address on his website that night. "The main reason for this is actions of the authorities. Therefore, people today demand Yanukovych and his government to resign. The sooner this happens, the less blood is shed, the faster Ukraine will move to a civilized future for which people has taken to the streets."

Despite the mix of political organizations involved, Vitali has quickly become the figurehead of a movement that is now less about about joining the EU as it is about getting rid what some Ukrainians consider a “mafia regime,” and the geopolitical tug-of-war between Russia and the West. According to recent polls, Klitschko has become the most influential opposition leader, largely because of his fame as a boxer.

Having spent significant time training in Germany and the United States, he embodies more modern Ukrainian values and Western ideals.  His brother, Wladimir Klitschko, another heavyweight world boxing champion (the IBF, WBO and Ring title holder) is engaged to American Hollywood actress/activist Hayden Panettiere. After Vitali announced he would run for the presidency in early 2015, the government proposed a law that restricted his eligibility based on years he spent training overseas.

A true “People’s Champion,” Vitali is seen as a stark antithesis of the “culture of corruption” of the current regime.  The reputation of Ukraine’s dirty political oligarchs is that they have made their fortunes on the backs of the working-class, whereas the tall and ruggedly handsome Vitali made his millions in a more legitimate and transparent way -- in the ring. "He’s earned his fortune with his hands, so he doesn't need to steal from the people," a factory worked told a Reuters reporter. This reputation continues to grow as rumors spread that Vitali has refused all bribes, including $1 billion that the powers-that-be offered him to not run.

Yesterday, under the continued pressure of the oppositional movement brokered by Vitali (and sanctions by the United States and Europe) the embattled President signed a deal he had been resisting all month that restores parliamentary democracy and includes concessions for early elections, decreases in the president’s power, and frees jailed ex prime-minister Yulia Tymoshenko.

This peace-pact is big win for Klitschko, who has made a point to fight for nonviolent solution, but it’s still not clear if people on the streets of Kiev will accept it. When Vitali showed up after after signing the agreement, the front-lines of the crowd scolded him, chanting “Shame! Shame!” While he spoke, a coffin was brought up onto the stage to remind him that close to 100 people have died this week.

Today, Ukraine’s Parliament gave the people what they asked for and ousted President Yanukovych, who immediately left the city. Despite the uncertainty of the legality of his presidential run, an election will be held in May and Klitschko remains the obvious candidate to support the will of the people. “This is a political knockout,” he told reporters this morning.