Wrestling in Mythology: Gilgamesh vs. Enkidu 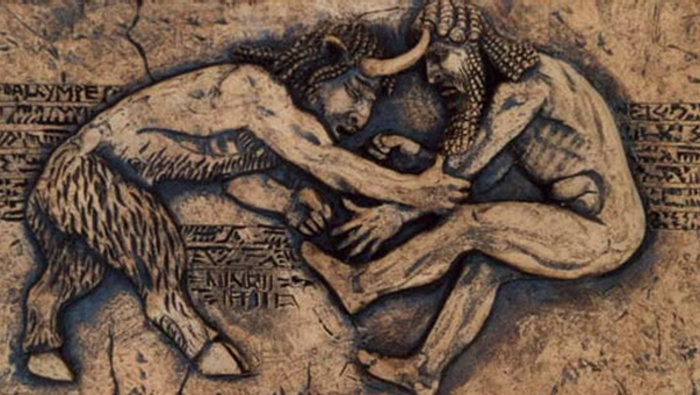 We humans are myth weavers, storytellers, poets, novelists, and bloggers. Humans have also, probably since the dawn of whatever genus started walking on two legs, been incorrigible wrestlers. The question is which matchups were so extraordinary and essential as to warrant becoming legend.

We began our investigation by looking not just at an epic wrestling match-up, but a match-up within an epic poem; Homer’s dissertation on war, The Iliad. That Greek poem certainly qualifies as “ancient” to us now, but a thousand years before Homer there was another epic poem that celebrated grappling.

This was a contest in the cradle of civilization itself. Preserved only in fragments, in those strange symbols known as cuneiform, on clay tablets left by a great Sumerian culture. In the city of “Uruk of the Sheepfold”, a magnificent capitol whose walls “no work could equal”, a match between the “divine” hero king Gilgamesh (already legendary for building said walls) and the powerful challenger, the wildman, “Enkidu the fighter,” would be remembered as an all-time tangle. When these ostensibly historical men (scholars acknowledge the existence of a king Gilgamesh) wrestled for supremacy, they represented a clash between divinity and earthliness that would have felt especially relevant to the first peoples attempting civilization. That’s not what we’re here to discuss. Might something in this most foreign and far removed text still have something to say about wrestling that resonates with us, about the techniques, or the need to compete in the first place?

Ancient Tale of the Tape: Gilgamesh

Gilgamesh is the physically formidable king of the city of Uruk; described as “powerfully built-hero”, “a butting bull”, and “the pattern of strength”. Probably my two favorite descriptions from those first two tablets have to be “He is a battering floodwave, who knocks the stone walls flat” and then later “Gilgamesh, dazziling, sublime.”

At the outset of the story, Gilgamesh proves a troublesome king. His people are in anguish. He is running the young lads of the city ragged and claiming prima nocte rights with brides on their wedding night.

“On the sheepfold of Uruk he himself lifts his gaze/ like a wild bull rising up supreme, his head high./ The raising of his weapon has no equal;/ with the drum his citizens are raised./ He runs wild with the young lords of Uruk through the holy places…Gilgamesh does not allow the son to go with his father… Gilgamesh does not let the young woman go her mother/ the girl to the warrior, the bride to the young groom.”

Ancient Tale of the Tape: Enkidu

At this point the goddess Aruru hears of these injustices and steps in. She creates “Enkidu the fighter” by pinching clay and tossing it into the wilderness. Born of the wilderness he “ranges endlessly over the hills” with the animals. He’s also rather unkempt.

“His whole body was covered thickly with hair, his head covered with hair like a woman's/ the locks of his hair grew abundantly, like those of the grain god Nisaba.” 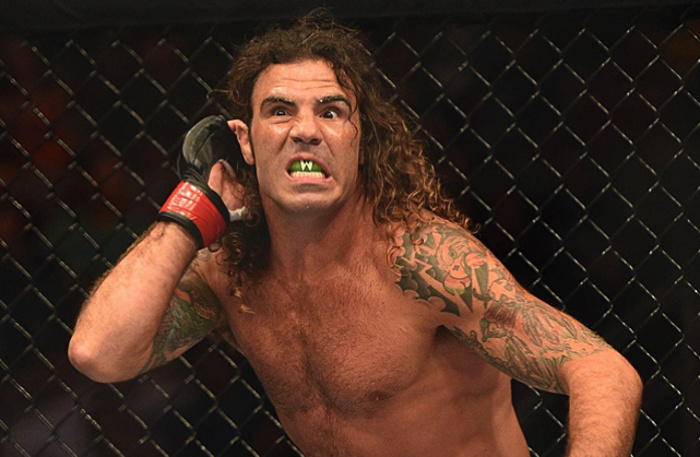 Born from the will of the gods, he appears to be specifically created by the Gods to defeat Gilgamesh. It is said Gilgamesh is two thirds divine one third human, while Enkidu is two thirds human one third divine. Enkidu initially lives with the animals and prevents the young hunter from catching his game. A repetition of descriptions used by the young hunter and his father equate the prowess of Enkidu and Gilgamesh. Including “power belongs to him”, and “Like a shooting star of the god Anu, he has awesome strength”.

Eventually, in a scheme cooked up the hunter’s father, a temple priestess/prostitute teaches the wildman Enkidu the basics of civilization. The point is after Enkidu is tamed he hears about the powerful King Gilgamesh terrorizing his people and decides to go to Uruk to challenge him.

In Uruk, Enkidu blocks Gilgamesh as he attempts to enter the bed chamber of a new bride, provocatively challenging his sexual dominance. This is when the wrestling match between the heroes ensues.

So the powerful warriors tie up and jostle for position. Without a designated area to confine the match they destroy property on the sidelines. In this particular translation, the match concludes with the following:

“As Gilgamesh bent his knee,
his foot on the ground,
his anger abated
and he turned away.”

Sort of an anti-climactic finish, right? I’m also not quite sure what the author is physically describing when there’s a foot and a knee involved, then for some reason Gilgamesh just turns away? It’s clear from the next column that Gilgamesh wins the match but the translation doesn’t make it clear how.

Turning to a second translation, we see a re-combination of the same articles that tell a different story.

“Gilgamesh bent his knee
and with his foot planted on the ground
and with a turn
Enkidu was thrown.
Then immediately his fury died.”

This makes a certain physical sense. In fact it sounds an awful lot like a wrestling technique we’d recognize today - something like a classic hip throw. 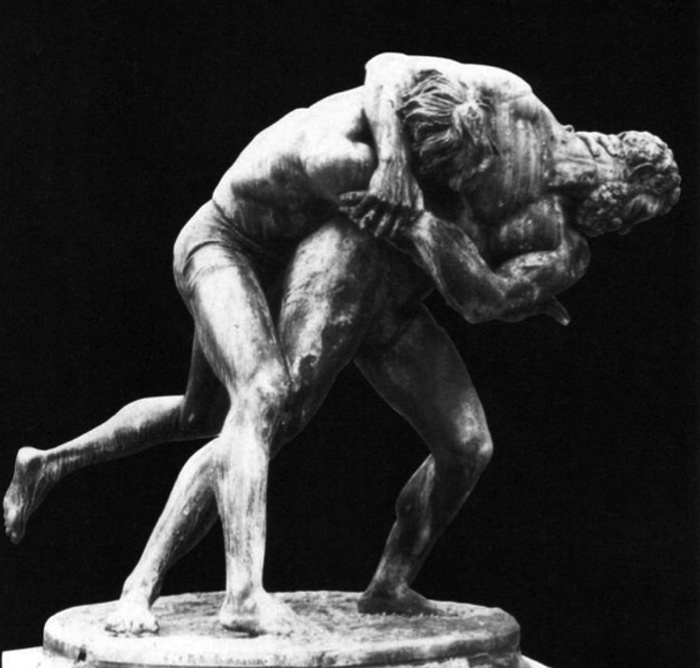 We know it doesn’t sound like a double-leg takedown. If it was a suplex there might be a mention of lifting somewhere. The original hero of literature applies a specific technique that involves a bend at the knee, a turn, and a resulting throw. There are myriad ways to misinterpret a several thousand-year-old text; earlier translators, making a mishmash of this section, might have benefitted from hitting the mat once or twice themselves. Physical culture will remain an important part of the larger culture such that we do a disservice, and are likely to miss important insights, when we fail to educate ourselves in each.

One such insight comes from the last line it this same short section: the fury of Enkidu and Gilgamesh is immediately abated. The showdown may have technically been a street fight and not a sporting event, but the two men chose to wrestle. They didn’t throw strikes. Once the “match” was won the two considered the dispute resolved. This is the civilized challenge for dominance that represents the original spirit of the sporting event. We have since formalized the rules and playing space but the question of dominance remains true to what is depicted here. The ideal of sportsmanship in two combatants who are able to drop the fury they brought into the ring after the contest is decided.

The text quickly pivots away from the fight with Enkidu and into an adventure where Gilgamesh and Enkidu quest into the forest to kill the demon Humbaba. This middle phase of the text includes the adventures of Gilgamesh and Enkidu making a name for themselves killing demons and offending deities. In the final phase Enkidu dies in battle, causing Gilgamesh to fall into a deep and long mourning. The brush with death scars Gilgamesh, spurring him onto a quest for eternal life. The problems that characterize the first section, Gilgamesh restlessly terrorizing his own people, are relieved with the arrival of Enkidu. Their friendship comes to define them both.

We’ve seen this story play out in the UFC today. Fighters that embrace moments after the fight is finished. We’ve seen fighters become friends after training together. The remarkable light heavyweights Alexander Gustafson and Phil Davis, who became friends after Gustafson lost to Davis, being a recent example. The Gilgamesh story understands something essential about the nature of male friendship having Gilgamesh and Enkidu begin their relationship by fighting each other, then become lifelong friends. Essayist and lover of “the sweet science,” Joyce Carol Oats, probably said it best in her book, On Boxing “to suggest that men might love and respect one another directly, without the ritual of combat, is to misread man’s greatest passion- for war, not peace. Love, if there is to be love, comes second.”

That might be tough for some to hear in our domesticated age. And surely war is not to be encouraged. However, there are those who hope for young boys to only ever play nice; those who stop them from wrestling. They are probably not unlike those who continue to ban combat sports in New York. They are trying to ignore a vital insight of ritual combat. Failing to acknowledge the sportsmanship, respect, and even love that can fulfill the life of the combatant.

Wrestling in Mythology: Ajax vs. Odysseus