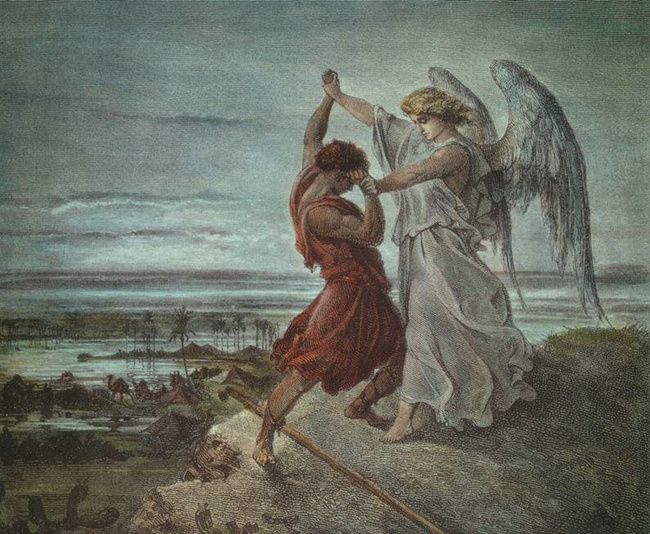 Jacob Wrestling with the Angel, by Gustave Dore

Dana White has often made the point that every human understands fighting, that it’s in our DNA. Miyamoto Musashi taught that the principles of bushido, the way of the warrior, translate into almost every human endeavor, including religion. These two observations were not lost on even the most ancient of sages for martial arts can be found in the foundational texts of many world religions. Martial arts, especially wrestling, can be found in the sacred texts of even the most unrelated faiths. In this article we will study the small role martial arts play in the religious texts of the Abrahamic traditions: Judaism, Christianity, Islam and Mormonism. In doing so, my focus will be strictly academic. This is an article on martial arts, not theology.

Combat is mentioned in ancient religious texts often in the context of divine combat, wherein creation happens as gods defeat a monster in battle, using the carcass as material for the creation. The Norse myths speak of Odin and his brothers defeating the giant Ymir, making the world from his carcass. The Enuma Elish speaks of the Babylonian gods defeating Tiamat then splitting her into two halves, like a fish, using one of those halves to make a covering for the heavens.  By contrast, the Genesis creation accounts, taken from what scholars call the Yahwist source and the Priestly source, feature creation, not by divine combat, but through the spoken word. Creation via speaking is also featured in the Memphite creation account, as recorded in the Shabako Stone, where the Egyptian god, Ptah, creates through his words. Though the biblical creation stories do not feature creation via divine combat, divine combat was known to Israelite scribes.

Isaiah 27:1 makes reference to the day when Yahweh will use His sword to slay Leviathan, “the piercing serpent…that crooked serpent…the dragon that is in the sea”. In Isaiah 51:9, Yahweh cut and wounded the dragon Rahab.  Such stories are common in Semitic mythology. In Stories From Ancient Canaan, by Michael D. Coogan and Mark S. Smith, we learn that Baal also defeated Yam (Sea) and was praised by the goddess Astarte, in a verse similar to what we find in Psalms 104:3-4:

Baal’s victory over Prince Sea and Judge River is paralleled by the Jordan River’s reaction to the incoming Israelites in Psalms 114:3: “The sea saw and fled, the Jordan turned back.”  While the Hebrew Bible features elements of divine combat, the oldest form of hand to hand combat, wrestling, is also featured in its pages. 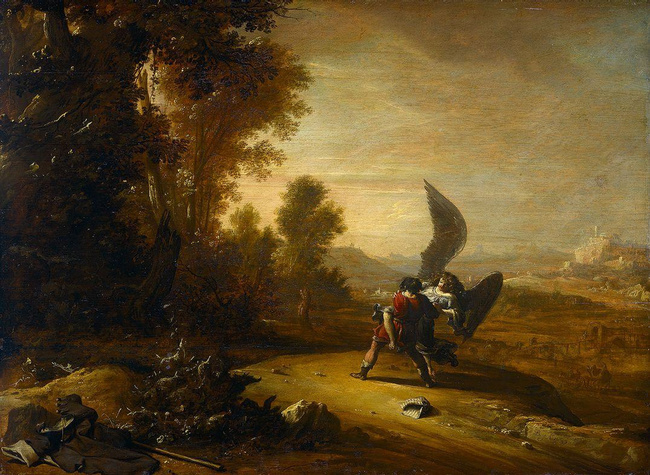 Genesis 32:24-30, tells the story of how the Hebrew Patriarch, Jacob, wrestled a divine being. After sending his family across the Jabbok River, Jacob spends the night wrestling “a man”. In the struggle, Jacob’s hip is dislocated but he prevails and manages to restrain his opponent.  The opponent commands Jacob to let him go. Jacob agrees on the condition that he receives a blessing from his mysterious foe. The mysterious grappler blessed Jacob and gave him the name of Israel, he who struggles with El, “for as a prince hast thou power with God and with men, and hast prevailed.”  Jacob later names the place of this encounter Peniel, literally, face of El “for I have seen God face to face, and my life is preserved.”

Multiple scholars have argued that the mysterious grappler Jacob wrestled was an angel or river spirit. Esther J. Hamori, in “When Gods Were Men”: The Embodied God in Biblical and Near Eastern Literature, argues that the mysterious grappler was none other than God Himself and that such anthropomorphism rationalizes the textual references to struggling with God and seeing Him “face to face”. Hundreds of years after these stories were compiled; the Jewish state would eventually become vassalage to the Roman Empire. Though many Jews lived in Judea, many lived and established communities in other lands. As Jews interacted with their host cultures, new questions arose regarding which Greco-Roman activities were kosher. One such spectator sport was gladiatorial combat. 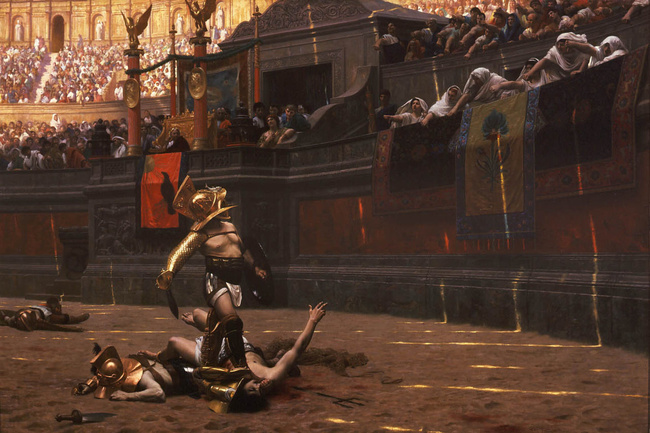 One particular Talmudic ruling dealt with the question of Jewish attendance at gladiator fights. In the Babylonian Talmud, Rabbi Nathan permits Jewish attendance at gladiator fights for two reasons: “first, because by shouting one might save [the victim], secondly, because one might be able to give evidence [of death] for the wife [of a victim] and so enable her to remarry.”  This ruling on gladiator fights is evidence that enough Jews attended gladiator events, so as to warrant an examination into its compatibility with their religion. Perhaps, Rabbi Nathan was even a fan. Another Jewish teacher familiar with Greco-Roman combat sport was Saul of Tarsus, the Apostle Paul.

Before becoming arguably the most influential proponent of Christianity, Paul was a Pharisee and a native of what is now Turkey. He was also a Roman citizen, which afforded him the “dignity” of death via decapitation as opposed to crucifixion.  Fluent in Greek, it is safe to say that Paul was integrated into Greco-Roman culture. In Forged: Writing in the Name of God, Bart Ehrman argues that many of the letters attributed to Paul, in the New Testament, are forgeries. Even so, Ehrman does maintain that 1 Corinthians was written by Paul. So for the purposes of this article, 1 Corinthians will be used as a valid representation of what Paul knew regarding combat sports, in the Greco-Roman world.

In 1 Corinthians 9:26, Paul makes reference to shadow boxing: “I therefore so run, not as uncertainty, so fight I, not as one that beateth the air.” As part of a larger argument for physical resurrection, Paul also alludes to gladiators who fought animals in the arena; in 1 Corinthians 15:32, he says: “If after the manner of men I have fought with beasts at Ephesus, what advantageth it me, if the dead rise not?” Paul seems to be referring to an episode in his own life, perhaps an episode of persecution wherein he was forced to fight an animal in the arena, maybe. So it appears that Paul was familiar with Greco-Roman combat sports, from boxing to gladiatorial combat. However, Christianity and Judaism aren’t the only religions with texts referring to martial arts or combat sport. Islamic texts also make passing reference to wrestling.

Along with the Koran, Islam makes use of the Sunnah, a collection of oral traditions concerning Muhammad’s life and teachings. Several of these oral traditions make mention of wrestling, the English translations of which can be found at sunnah.com. In the Riyad as-Salihin, Muhammad is quoted as saying: “The strong man is not the one who wrestles, but the strong man is in fact the one who controls himself in a fit of rage.”  In Kitab Al-Libas, Ali ibn Rukanah says that his father, Rukanah, “wrestled with the Prophet (PBUH) and the Prophet (PBUH) threw him on the ground.” These two verses suggest that Muhammad was a good wrestler and that he used wrestling as an analogy in his teaching. This is very significant for in the quran.com translation of Surat Al-Ahzab, it says: “There has certainly been for you in the Messenger of Allah an excellent pattern for anyone whose hope is in Allah and the Last Day and [who] remembers Allah often”. Muhammed is thus said to the perfect example of what a Muslim should be, making wrestling not only permissible but noble. So it should be noted that in the 2012 Olympics, Iran won six medals in wrestling; and that the world’s most prestigious submission wrestling tournament is headquartered in Abu Dhabi. The Bible, Talmud and Sunnah make mention of combat sports. What about weapons? For this we look to the Book of Mormon and what can be described as its description of the Autumn Leaf Strike.

One of the best descriptions of the Autumn Leaf Strike was written by Jack Slack. Citing Miyamoto Musashi’s Book of Five Rings, Slack describes “the attacking of the weapon arm and hand of your opponent as the Autumn Leaf Strike, because slashing at the hand forces the opponent to drop their weapon as a leaf falls from a tree. In unarmed combat there is obviously nothing to drop, but from Filipino Eskrima to Japanese swordsmanship to European fencing, the principle of striking the attacking hand is clearly multicultural.”

The Book of Mormon tells of an ancient prophet, Ammon, who was sent to evangelize his nation’s enemies. While in the service of a foreign king, Ammon chose to violently defend his new master’s livestock. In doing so, Ammon used the Autumn Leaf Strike: "But behold, every man that lifted his club to smite Ammon, he smote off their arms with his sword; for he did withstand their blows by smiting their arms with the edge of his sword …" (Alma 17:37, emphasis added). The idea that Ammon was intentionally using this technique is strengthened by the account of his later duel: "And he stretched forth his hand to slay Ammon. But Ammon withstood his blows, and also smote his arm that he could not use it" (Alma 20:20, emphasis added). As we can see, martial arts make their appearance in the religious texts of the Abrahamic traditions; more examples could be cited and the same might almost certainly be said for religious texts from India and East Asia, but that is another article for another day.

MMA Jutebox: What Your Favorite Fighter Says about Your Soul

Hélio Gracie and Buddha: What Warrior Philosophy Can Teach Millennials