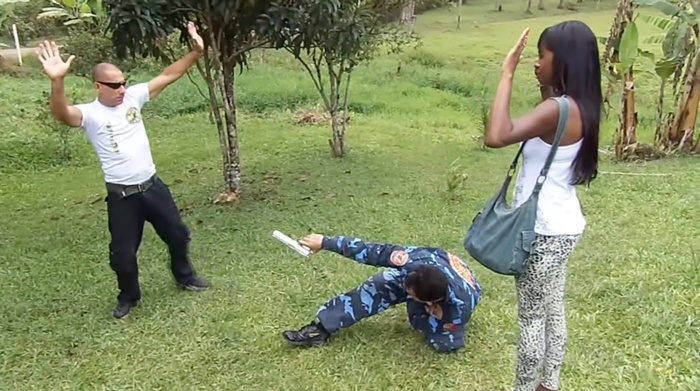 There is an old saying that goes: confront a gun, flee a knife. The theory being that it is far more reasonable to think you can overwhelm a guy who is waving a gun about than a knife. A gun fires where it’s pointed, after all, and the thinking is that if you can jump the gunman when he is not actively aiming at you, you've got a decent chance. Jumping on a man with a knife, meanwhile, has a great chance of getting your wrists cut to ribbons and any knife wound more than an inch deep along a good portion of the abdomen has a great chance of causing death if you aren't within collapsing distance of an emergency room. That, combined with the fact that unless you have made some real enemies or wound up in a very bad part of the world, the act of showing you a knife is normally to ensure there won't be a fight to give up your belongings.

Most people reading this are fortunate enough that a man brandishing a knife only means giving up their wallet, being petrified for a while, and having to go home and cancel all their credit cards. Yet there is a large group of martial arts which devote enormous amounts of time to the disarming of armed opponents. It should be made clear that even the military doesn't put that much stock into unarmed defenses against knives—pretty much the only profession where you would need to actually be able to confront someone armed with a knife is in law enforcement and then it has been found that firearms, stab proof jackets and superior numbers work out far better than wrestling over the knife like Sly Stallone.

I'll say it right now, any martial artist who devotes a great deal of their time to disarming unresisting knife or gun wielding training partners is essentially a live action role player. You cannot realistically spar a mugging by simply having your buddy hold a knife or gun in front of you. You are free to test how well you would do against a live sparring partner with a knife at any time by giving them a tube of lipstick to serve as a knife. But you won't see that kind of test often because it is not very comforting to know just how many holes the blade would have made in your arms and guts while you were applying your sick Americana or kote-gaeshi throw. Or you could just watch one of the best welterweight fighters in the world, Jon Fitch, fighting against a semi-resisting partner with a 'shock knife' and see that two hands on the knife hand doesn't work out well even for someone of Fitch's tremendous strength and grappling pedigree. Notice that at one point Fitch actually pulls guard and pulls the knife right past his testicles.

The best advice I have ever encountered on knife defenses, aside from 'run when you have a chance' is to get something over your hands so that you can actually throw them on the knife arm with a lesser chance of bleeding out during the struggle. The usual example is a coat. Even then, I wouldn't like my chances. If you jump on someone with a knife and they are actually moving, you will get cut up—no fancy disarms are going to bypass that and often they just give false confidence where the kind of training Fitch was doing makes it clear just how hard it is to wrestle a knife from someone and just how often he would have been stabbed or slashed.

So knife defenses are largely silly but the majority of gun defenses are daft too. There have been plenty of cases of hostages or people caught up in robberies charging a gunman and wrestling him to the ground, but the vast majority of martial artists devoting their time to gun disarms start with a gun pointed straight at their face. We talk a lot about shortening paths and telegraphing when we're discussing striking—you would be pretty naive to believe that you can train to get your hands to the gun and perform a complex action in a quicker time than it takes to pull the trigger.

Even better, when confronted with the “what stops him shooting you?” argument, some gun disarm believers argue that if someone is pointing the gun at you from that close they probably don't want to shoot you and just want your wallet... in which case why escalate it by trying to slap the gun out of their hands?! One popular martial arts YouTube channel even suggested that it attracts too much attention to shoot someone from a distance, so a gunman wants to get within disarmable distance before firing, which is of course why drive-by shootings are declining and intimate, unsuppressed, face-to-face executions are on the rise.

I've been around this business of martial arts for a while but every now and then I find something which revolutionizes the way I look at an aspect of fighting. A few weeks ago I was lucky enough to be introduced to the work of a man who is leading the way in practical firearms defense. In a hundred years—by which time we will be using plasma weapons but the principles will remain the same—this man will be remembered for revolutionizing combatives in the same way that Daniel Mendoza revolutionized the art of swinging fists. The man they call...or at least he calls... Master Rayllamm.

Heavily influenced by the work of Bruce Lee, Rayllamm is never seen in anything but his blue camouflage because he's always being 'like water'. What I appreciate about Rayllamm is that his gun disarms are almost always to intervene in someone else being mugged. He has the right intentions straight from the get go. I also respect his confidence in his grappling (in which he is apparently a seventh dan—literally in 'grappling'). All these guys getting black belts who are still afraid to work from their back in a real fight are an embarrassment to their art. Not Rayllamm, he'll throw himself to the floor even if he could have landed on his feet.

Even if he often dives shoulder first into the knee of the man he is saving, like Triple H when he's working over the leg, Rayllamm gets full marks for commitment and style. Though he is considerably more tender when saving the ladies.

Add in the sound effects and hip thrusts when he is pretending to gun down the man he has now disarmed in cold blood and Rayllamm belongs on the stage. My personal favorites are when the gun falls to the floor and Rayllamm either half heartedly pushes his man away or walks straight over to the gun, completely forgetting that the gunman is still there.

Or when he holds his man at gun point with the gun upside down and no way to pull the trigger.

It might be reasonable to be skeptical of Rayllam's grappling credentials but I suspect that he has some experience in the Vietnamese art of Vovinam which considers its head scissors takedown a specialty. I don't recognize the follow up submission holds though, so those might also be Indo-Chinese in origin rather than from the BJJ / Judo / Catch canons which we are now all familiar with.

Honestly, if you are going to confront a gunman there's not a lot of training that is going to help you. Bum rush them if they aren't looking at you and keep the barrel pointing away from you is about as complicated as it gets. If they have a gun pointed at your head, it might be worth waiting out the rest of your life to see if you can find an opportunity that is better than the worst possible time to attempt to wrestle the gun from them. If you're still worried about getting held up with a gun or a knife I can only suggest that you move to a nicer town or subscribe to Mestre Rayllamm's YouTube channel. Who knows, maybe you'll get the call when his paramilitary operation gets off the ground.

Wushu Watch: How I Learned to Stop Worrying and Love Wing Chun