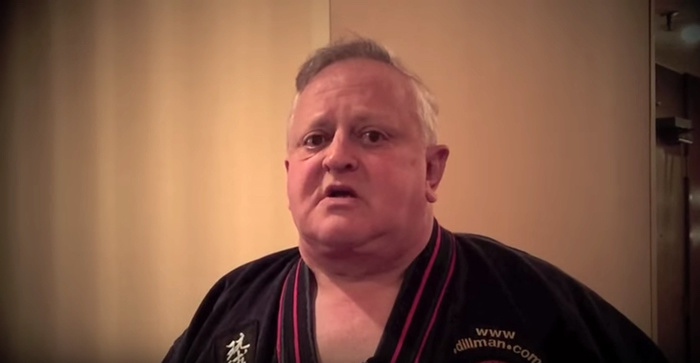 If you enjoy a bit of martial arts flim-flam—or bullshido—with your morning coffee, you should acquaint yourself with the name 'George Dillman' and Google it regularly. Dillman is largely responsible for the growth of the kyusho movement, an offshoot of karate that focuses on pressure point fighting. The moment you read 'pressure point', alarm bells should have begun to ring in your ears.

Here is master Dillman demonstrating a nerve attack, driving an ippon-ken or 'one point fist' into his attacker's face. He does a bit of the old “if I do it like this, or this, it doesn't work. But when I touch the two points together...” Thereupon, his demonstration dummy flies off as if he's been struck by lightning. It's all good for a laugh, and makes a good study in the power of the mind and of suggestion, but when Dillman starts spewing his nonsense about how this technique is practical in a rape situation, it's time to get angry.

You will most likely remember Dillman from the TV spot where he attempts to demonstrate his no-touch knockout (the legendary, and ridiculous, toate) against a willing dummy who has not been brainwashed by his school. Unsurprisingly, his twaddle seems noticeably more effective on an opponent with each dan rank given under his system, against the novice it does nothing.

Dillman takes up more of my time than perhaps he should, but the fascinating question I still rack my brain over is whether he is deliberately misleading his followers, or if he is genuinely delusional. Before I went on my holidays, I picked up Dillman's memoir as a means to either distract myself during long flights, or in hopes he could give me the no touch knockout through print. Sadly, Caitlin Moran seems to be the only author capable of the latter to this point and I was left learning far more about Dillman's life than one should ever need to.

The fact that the text is entitled Prometheus (the Greek mythological figure who stole fire from the gods and gifted it to the humans, only to be brutally punished for his act of kindness) should give you a clue as to how Dillman feels he fits into the order of things. What is truly bizarre is that despite the quirky path he ended up taking, Dillman, from a fairly young age, was lucky enough to rub shoulders with some of the finest genuine martial artists and fighters in the world. Everyone from Bruce Lee to Muhammad Ali is name checked and Dillman was able to train with men like Chuck Norris, Bill Wallace, and Hohan Soken. His belief that there's got to be more to this karate stuff than stepping punches and exaggerated blocking is something that plenty of others have found themselves thinking, quite reasonably. But the rabbit hole he disappeared down wound up somewhere crazy.

Recently, G-Dilly posted a video to YouTube containing thirty minutes of his students demonstrating pressure point knockouts. From the moment it came up on my subscriptions, I was salivating. As the video began playing, I read the description and was informed:

All new KO's, see why it's banned by UFC.

What followed were some of the most hilarious martial arts techniques I have seen in my life, each with George Dillman voicing his approval in the background, and each was accompanied by a theatrical fall and back rubbing to 'revive' the demonstration dummy. If you have the time, I highly recommend watching the entire video here, but if you can't be bothered I will share the most peculiar techniques.

Let's start things with a counter to a tackle. Our old chap braces on two points, which he cannot remember the names of and then slaps heartily down on the back of his attacker to send him pancaking to the floor.

“Is that an anti-Gracie technique?”

Herein lies the flaw with all kyusho-jutsu techniques, they are play acted against imagined attacks rather than practiced against legitimate ones. A wrestler or mixed martial artist learns to sprawl by practicing the movement against a fairly compliant opponent, then trying and failing it numerous times against real shots. Our Dillman black belt stands in place with his legs directly under his hips and demonstrates it all from there. The moment his opponent began pushing in, the Dillman black belt would be toppling over regardless of whether he got his pressure point silliness off or not. The laws governing balance, unlike those governing chi, never falter. If your center of gravity moves behind your legs and they are not free to catch up, you're going to fall over.

To chalk up another in the unrealistic attacks column, take a look at this front bear hug defense. Do you know why you probably haven't seen a solution to the front bear hug over the arms before? It's not a question which needed an answer. There has never been such an utterly worthless position. This is hammered home as uke is unable to lift tori when asked to.

No underhooks means no handles, and no ability to lift or even control the opponent's weight. Furthermore, look where tori's hands are before he begins his mystic floating rib rubbing. In a front bear hug over the arms, there is nothing preventing the victim from taking a nice big handful of genitalia. If you still feel worried about this position, pretty much the unicorn of self-defense scenarios, abandon the chi and start working on your grip strength.

And really this leads us back to the truth about many traditional martial arts: the questions are simplified and the answers are overcomplicated. Every attack is a worthless stepping punch, every defense is a five part dance of violent justice. Here's the thing, vital points do exist, in a way. If you wallop a man in any of the forty or so points laid out in say, Gichin Funakoshi's Karate Do Kyohan, it's going to hurt. The human body isn't meant to be hit, and there are plenty of places where it reacts especially badly to that. The solar plexus and floating ribs which are responsible for some incredible body shot knockouts, the temples and jawline, the tender portions down the sides of the thigh, the brittle orbital bone around the eye socket. Every tip top striker you've seen goes after these more than they go after “head, body, legs”.

The problem is that half of the genuine weak points on the body are going to be impossible to find against an opponent with his guard up, and any of them gets much tougher to strike when the guy starts moving. I want you to think of the most accurate boxer you can—Sugar Ray Robinson was famously on point in his attempts to catch the solar plexus and temples, Muhammad Ali specialized in swelling the eyes of his foes—they made careers out of it and still couldn't hit the mark the majority of the time, relying on volume. Anything which requires two set up points to rub a third knockout point is not going to work on a moving target, let alone one who is busy throwing strikes. And that's assuming the chi meridians and elemental alignments of stances were provably effective to begin with. 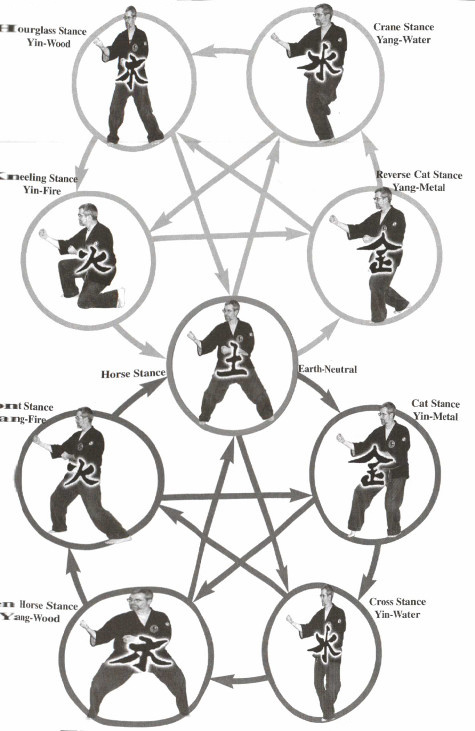 Nothing hammers this home quite like this technique wherein tori hits uke three times on the same spot, rendering him unconscious.

Let's give the guy the benefit of the doubt and pretend he didn't just flop after he felt the men behind him catch him—what use is that technique? When are you ever going to be allowed to 'ox jaw' strike someone in the eyebrow three times? And if you have to pause this long to find your follow up point, are you doing it right? Is there a cool down timer on set up points?

That 'simplified attack, complicated response' is perfectly summed up by this young man's interpretation on tora-guchi or 'tiger's jaws'. Tora-guchi / Mawashi-uke is the posture you will so often see karateka demonstrating when they want to appear particularly mystical, Katsunori Kikuno normally does a dramatic Kyokushin style one before his fights. Here's the classical style:

Now Dillman's lad side steps that old stepping punch that no-one has ever, ever used to initiate a street fight or a professional fight, taps the arm a couple of times and knocks his man out.

When you search to find an advanced application of a formal movement against a worthless attack, it's going to end up looking silly. Hilariously enough, tora-guchi was pretty much solved by the great Okinawan martial arts text, The Bubishi. It's as simple and to the point as you could ever imagine. The groin and the throat. Actual vital points, no chi set ups necessary—only access to the centerline.

But a policy that I have always held is that everyone who has been in the martial arts for some length of time has something interesting to show you, and I think that's true here. This chap with the big hair and the moustache demonstrates an interesting chin na technique which you will see demonstrated in old Chinese martial arts manuals. Dropping the elbow on top of the opponent's elbow can force a bend in the arm—Braulio Estima uses this to hinder collar grips inside the closed guard. Grabbing an opponent's hair will give you an unreasonable amount of control over him—hence it being banned in every combat sport and so commonplace in Chinese and Japanese martial arts, particularly with the popularity of long hair in those nations until the twentieth century.

If you need a combat sports example, check out Royce Gracie versus Kimo Leopaldo. Leopaldo was the first man Gracie had met who knew enough jiu jitsu to survive, and he considerably outweighed Gracie. The consensus is that Leopaldo's choice of a pony tail saved Gracie in that bout. For a historical example, Daniel Mendoza—the greatest scientific boxer of his day—was brutally beaten when an opponent opted to grab his luscious locks and pound away with his free hand.

I have always liked the reverse grip on the hair as an idea (there's a Chinese name for it, I'm sure, but I'm afraid I don't know it) because it pairs so well with a simple back heel or osoto gari, and that leading the attacker by the hair will make it very difficult for him to keep his head from hitting the ground first, no matter how good at break falling he is. What I don't like is that it is all framed in yin and yang, and a slight tap is enough to render the training partner unconscious. It's a neat application of a classical martial arts grip but it's still being looked at through the lens of nonsense and performed with no mind to what the other guy would be doing as he's providing no resistance.

The jury is still out on whether Dillman is a con artist or flat out deluded. There's reason to believe both but I might be wavering on the side of delusion. Dillman clearly cares about his students, many of whom have been with him for years, and he's obviously willing to sign himself up for these scientific tests which debunk him on film. If you want to meet people and get out of the house, and kyusho is a way to do that, more power to you. But to pretend that this stuff works on anyone who isn't standing perfectly still or who isn't already indoctrinated is just a recipe for disaster. And whether or not he believes it, rape defense and the ability to win boxing world titles is what Dillman is advertising.