Wushu Watch: How I Learned to Fight Twenty Men 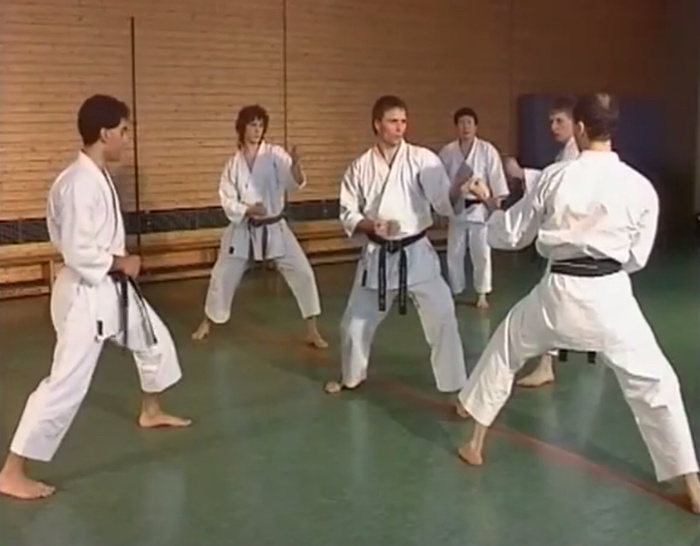 In the course of assembling a martial arts library you will quickly realize that price is a product of scarcity and does not give any indication of quality. You can pick up a copy of Nestor Capoeira’s Little Book of Capoeira, a masterful text on the Brazilian martial art, for quite literally a penny plus postage on ebay or Amazon. Meanwhile, a thoroughly mediocre text on Sambo this writer acquired some years ago, and which quickly went onto the shelf and hasn’t been brought out since, is now selling for upwards of eight hundred dollars online, used. But equally a text staying in print for a long time and being affordable has just as little connection to its quality. One of the better selling martial arts books on Amazon is Hirokazu Kanazawa’s Karate Fighting Techniques: The Complete Kumite and it is this largely unhelpful tome which brings us on to our subject for today. How does one do battle with multiple opponents?

Kanazawa, being a classically trained Shotokan karateka and that style’s highest profile teacher, advocates a style of training called happo kumite which pits one man against eight. Here is Kanazawa explaining the logic, in what reads like a pitch for Soul Calibur’s ground-breaking eight directional movement:

“If a person were able to defend himself against attacks coming from eight directions it is unlikely that there would be physically be enough room from which an additional attack could be delivered. As such, from a self-defence perspective, if someone were to face more than eight opponents, it would not make much difference if there were ten or there were twenty, as they could only come from approximately eight different directions. This principle represents thinking behind happo kumite.”

Now, happo kumite is a form of ‘promise sparring’, which means that the attacks are agreed upon, or at least announced, beforehand. Here it is in action at its most basic.

Were this just a gimmick for demonstrations, there would be no point talking about it but Kanazawa is selling it as a self-defence tonic. Even martial arts legends can fall victim to silliness if no one ever questions them on it, after all. The master insists that in happo kumite the attackers should maintain a realistic distance of about six and a half feet, and that the defender should avoid being ‘pushed into a corner’ and keep one foot in the circle—completely contrary to the one thing everyone should be doing if they are unfortunate enough to find themselves attacked by multiple opponents.

It seems like martial arts films are to blame for the idea of encirclement and defeating one attacker after another. Let’s be honest, if you haven’t been into a club or pub and envisioned how you would clear the bar when it all kicked off, you’re not living in your own head enough. Chances are that in your mind it looked something like this:

Maybe you’ve spelled it out to your friends. “I’d just do this…”

But if multiple people particularly want to hurt you there are two likely outcomes. The first is that you engage one, perhaps even expecting a gentlemanly one-at-a-time series of bouts, and as soon as you fall into a clinch his friends will pile in to drag you to the floor and kick your head in. The other possibility is that they all simply fall on you from the start. No six foot gap for beautiful distance striking, just a maul. This is half the reason that zombie hordes are scary—you can’t fight off a group of people who only need to get a grip and lean on you.  Run through any two (or more) versus one fights on any of the internet’s many street fight video aggregators, the same pattern repeats itself time and time again.

Even in Russia’s awful attempt at team MMA, you will quickly notice that once one person is eliminated, the numbers very quickly tell the story. The extra man will run over to another pair who are locked in a grappling exchange and start beating the snot out of the member of the opposing team while he is tied up. The story of a fight for the side with multiple attackers is that most don’t even need to do anything except get a hold of and fall on the guy they’re attacking, there are other guys to do the actual hitting.

Even with the fighters caught by superior numbers while still on the feet, you will notice that they don’t have space to wheel around and keep their head on a swivel as the happo kumite exercise is supposed to teach you. It’s tight and it’s panicked and it’s nasty.

Distance is comfortable. It gives us time to think, and to deal with the opponent attempting to close that buffer zone. It is through distance that most striking technique is made possible. There’s a reason that the first pugilists were advertised as masters of ‘time and measure’, after all. But in having attackers perform the aikido style straight line runs through the middle man, we have to ask ourselves: is this the real life or is this just fantasy?

That’s the great Ninjutsu master, Richard van Donk, giving Luke Thomas ammunition to further besmirch the Donk name. Ninjutsu may too easy a target, but even many modern combatives and self defence teachers seem to make the same decision as The Donk. “Of course, realistically they might not attack me one by one, they might all grab a hold of me…” and then suddenly we see one man overcome the will and strength of three with ease with seemingly no explanation except “I’m moving away from their force.”

With cat-like grace, Donk-san falls to the floor with his attackers and they are rendered unconscious.

There seem to be only a couple of reliable rules in fighting multiple opponents and even following these to the letter it’s an uphill battle. First it’s important to ask why ‘defeating multiple attackers’ is important. If they’re attacking you, why do you need to ‘defeat’ them? Surely getting the hell out of dodge should be enough? If that is what’s required, escaping the encounter without serious bodily harm, the prime directive should be to run at the first opportunity. Roadwork sucks, but it is the single greatest technique against multiple attackers.

The second rule is to avoid encirclement at all costs. This is where we can apply what we know from one-versus-one engagements and combat sports. It’s a case of angles: everyone’s defences are set up at twelve o’clock, no one is good at defending themselves when attacked from the side or behind. And turning requires space, something you won’t have once the fight starts. If you do ever find yourself in the unfortunate circumstance of having multiple people around you and it looks like it’ll kick off: make a break for it. Breaking out of the circle and placing all attackers on one side of you is not, as Kanazawa suggests, being backed into a corner unless you have escaped the circle into a literal corner. Positioning is everything in the fight game, and in a multiple attackers scenario there are only two variations you need to know: 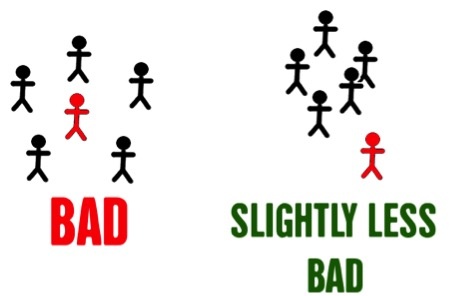 Real people will not attack you single file, but getting to a position where they are pursuing rather than encircling makes it possible to see all of them, and those at the back will struggle to attack until they have stepped around their companions. In an ideal world it is fighting at distance with the people at the front, rather than being in the middle of a dogpile.  What’s more, if you’re lucky, this is no longer a fight but a foot race and you’re already out the door. In fact doors are important because when you’re dealing with numbers you need to realize that obstacles and chokepoints are far, far more valuable than the wicked right low kick you’ve been working on for years.

The now legendary ‘Boxer versus Four Attackers’ video is the standard when thinking of successfully fighting multiple attackers:

The single most important thing about the video is that the boxer keeps all of his attackers in front of him, and chasing him, as he backs up. The punches are just the boxer lashing out as soon as someone begins to get a hold of him or comes close enough; it is his footwork and positioning that save him. Even then, he is backtracking into a busy road, blind and could easily trip over any obstacle behind him. At a certain point, even as a trained boxer against clumsy, angry middle aged men, turning and running makes far, far more sense.

So far, in my journey through martial arts, I have yet to meet someone with a reliable answer to multiple attackers and I don’t ever expect to. One person is pretty unpredictable but things like lapel grabs, haymakers, tackles are standard acts of human aggression. When you factor in another person, and another one, and another one, you have no idea what you will be dealing with. So whether it is throwing three wicked strikes out in different directions, or training multiple counters to a symmetrical wrist grab from both sides, the chances are it is worthless to you.

By all means, muck about with the idea with your training partners. Like knife defence, attempting it against a resisting opponent in a safe environment is a good way to check your ego and hammer home the dangers of believing martial arts can prepare you for that situation. But as a single person against multiple attackers, so far there is only one proven method: run, swing like a mad man when you need to, and run some more.

Wushu Watch: Why Aren't People Getting Thrown Around By The Wrist in MMA?

Wushu Watch: A Concession to the Men In Black Pajamas