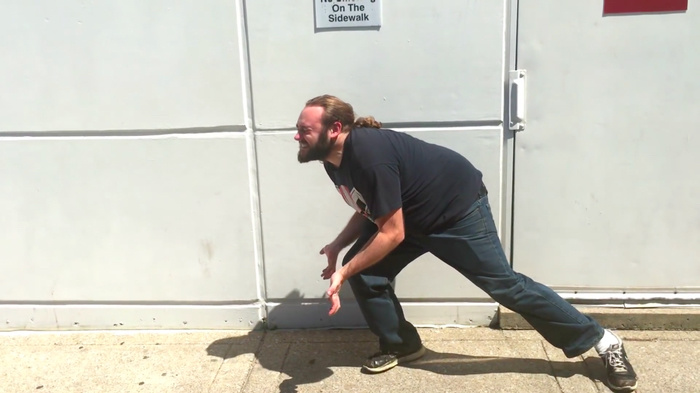 If you have ever been forced to sit through a martial arts demonstration you have been fed that same line. It is the buzz phrase of the fighting arts: using the opponent's energy against him. In this way, the small old man in the hakama can force bigger, younger adversaries into pinwheels through the air, cartwheeling around their wrist joints. It is the single most commonly used phrase in traditional martial arts and yet it is largely meaningless sales patter. Yet in true fighting arts it is the single most important truth. The problem is that only lip service is paid to the memory of 'using the opponent's energy against him' in most dojangs and dojos and rigor mortis has long since set in on the corpse of the notion. The sad loss of this great truth can be attributed to two practices: dead, wooden training, and falling into the delusion that 'energy' means an invisible Star Wars like force.

You will have seen the first flawed practice in action. Any time you see an aikidoka defend himself against an extended arm zombie charge. Or when a karate or taekwondo stylist receives a stepping or lunge punch—the kind that an untrained opponent will never throw and an opponent with even a week of training knows is absolutely useless except in the most niche of circumstances. Competent fighters don't commit their weight willy-nilly, and while they might not be polished scrappers neither do normal people. Even when moving on to 'real world attacks' they are practiced in the most wooden style possible and often the attack itself isn't even understood. Take for instance this counter to a takedown.

As an aside, look at the attacker's back leg—notice how the foot is turned out and the knee is collapsing in. Not only is that weak wrestling or fighting form, that's a blown out knee waiting to happen.

Better yet, this Aikidoka does some work against what he thinks is boxing. You know, the kind of boxing where no punches are actually thrown and the arms are held sort of away from the boxer but never actually doing anything useful. Another example of preparing for a written test on the book you haven't read.

Most dangerous is the tendency to fetishize energy. Not energy but energy [pronounced chi or ki with emphasis on the mysticism]. When you hear a martial arts instructor talking about putting their energy into the ground or into the opponent and they are talking about something independent of physical movement, they're talking nonsense. Aikido is the classic example of mysticism in the martial arts, but the new kid on the block is Systema. Mikhail Ryabko is the most prominent offender:

The “run at me and keep going once I've moved” school of martial arts is still going strong despite the rise of 'live' martial arts. Live martial arts being those which encourage regular sparring and working with actual resistance against someone who isn't just going to throw themselves to the floor if they miss a punch or a grip. But this isn't just a thing for those who don't know better. Martin Wheeler teaches at the Brazilian jiu jitsu legend Rigan Machado's school and likely runs into competent grapplers every day but can still go around the world wowing people with this stuff:

And it is sneaking into Brazilian jiu jitsu too, as the first generations of BJJ black belts get to the age where their strength and reflexes just aren't there any more they start to get into the 'energy' lark too. It's that or resorting to claiming that new stuff “wouldn't work in a self defence situation”. Just the other day I saw a very highly regarded Rickson Gracie black belt spiraling off into talking about where he 'puts his energy'.

Here's the thing: when you consider energy as the movement of weight or physical effort in a direction you can find thousands of actual examples of it being used against the aggressor in real, resisting martial arts practice. Every great counter puncher looks to get his opponent stepping in onto his punches. Every great judoka can use combinations of push-pull/pull-push throws to capitalize on the opponent's reaction to their initial throw attempt. When you see a judoka fling his opponent through the air effortlessly that is because he caught his opponent's weight moving in the same direction. It's not magic and it doesn't come easy. The judoka goes out and makes it happen with feints, balance breaking, and real attempts to drag the opponent into throws so that the second or third attempt in a chain of offence come more easily. The opponent is fully aware of the thrower's attentions the entire time, is actively resisting, is trying to put together combinations of his own or counter, and most importantly isn't working at quarter speed.

An inside reap attempt forces David Moura's opponent backwards, as his weight comes to a stop Moura hits a beautiful yoko tomoe nage.

The oldest trick in the boxing book is to step back and get the opponent coming to you. The opponent cannot answer your back step by stepping back themselves because they will look ridiculous. Eventually they will follow and if you can step in on them with a jab as they step towards the space they have been taught to think you will vacate, you get their weight lunging onto your blow. You can go to Fight Pass right now and watch Lyoto Machida retreat from every opponent placed in front of him, until they begin taking the 'extra step' and committing their weight to a chase. Then Machida steps in and meets them with a straight punch or a knee to the midsection. Another example of a flashier fighter exploiting the exact same principle is Raymond Daniels who retreats to get his opponents advancing onto back kicks.

In grappling? How about Sean Roberts' famous 'Giggler' sweep on Rodolfo Vieira? Once Roberts had forced Vieira down to half guard on his knees, he knew that Vieira would dive after the cross face to begin smashing him flat. Controlling Vieira's near hand and belt, Roberts turned his hips back to the floor and his knee shield upwards as Vieira dived in after the cross face.

Luke Stewart swept the great Andre Galvao twice in mixed martial arts with a variation of this technique.

What you will notice in both the striking and grappling examples the exploitation of the opponent's weight or movement, or 'energy' if you really must, was in a specific counter. Work had to be done to get the opponent moving in the desired direction. Movement and action was used to produce a predictable reaction from the opponent. There was no standing still and waiting for an attack in order to identify the intention en route—something which can only work consistently when training at quarter speed with willing rag dolls. And it was never a game of committing the weight to a charge for no reason—there was always a reason that the opponent committed. Whether that was because he was drawn out with movement and evasion, or if he was simply looking to grab a hold of the cross-face—the most commonly used method from the top of the half guard.

The moments of real beauty in fighting come when one man seems to know what the other will do ahead of time and reacts perfectly. These are the result of years of training with live opponents and forcing them into the same positions time and time again. Knowing the ins and outs of one tiny area of a fight and exploiting the most common responses.

If you are looking for a martial art which requires no strength to practice, there are dozens out there which you can look into. If you are looking for one which will actually help you against a resisting opponent without using strength you will be sorely disappointed. I am not qualified to say things such as ki or chi do not exist, but science hasn't found them. Science can show that blows to the face and organs and impacts with hard floors cause damage. I'm sure you can work out which one it is smarter to build a style of fighting around. There is a reason that every combat athlete in the world has a strength and conditioning regime outside of simply sparring. But then many of these 'use the opponent's energy against him' martial arts believe in neither sparring nor strength and conditioning or at least only pay lip service to them. And that is why—even if they contain interesting ideas and techniques—these arts will only occasionally be much more than practicing a two person gymnastics routine.