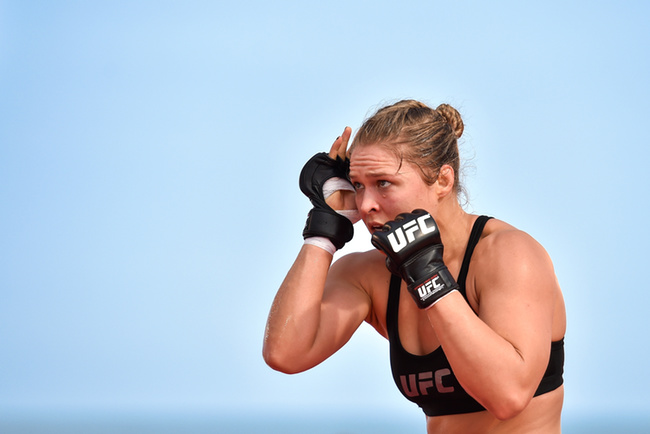 Wushu Watch: Ronda Rousey Versus Men, And Why Wing Tsun is the New Hotness

Two weeks ago, I ran down some of the stupidest things I had encountered in martial arts. I joked that there is enough daft stuff going on in this subculture that I could do it every week. Well, here we are a fortnight later and I'm almost overwhelmed by all the daft stuff I've seen since. Today we're going to be discussing Ronda Rousey versus men, Glover Teixera taking Jon Jones to the limit, and Wing Tsun versus wrestling.

The world picked a strange week to grab on to Ronda Rousey and embrace her as the greatest thing since sliced bread. Beating a more than ten-to-one underdog whose UFC opponents have a combined record of 1-7 in the promotion, Rousey's performance told us absolutely nothing new. Smashing Cat Zingano in less time than it takes to say her name, or showing the savvy to develop her clinch striking game in order to flatten fellow Olympian, Sara McMann—now that was really something. Bethe Correia? Not so much.

One of the angles that the internet has come to love is the “that's what you get for talking shit” narrative. Gifs and videos of Bethe Correia shouting in Rousey's face at the weigh ins and then face planting along the fence flooded Reddit and the masses reveled in it. As if getting laid out in thirty seconds by a vastly superior fighter wouldn't have happened if Correia hadn't produced the drama. It's perfect, it appeals to the bullied child in all of us.

Of course, Bethe Correia had no business being in there fighting for a UFC title to begin with. She's done nothing of note in a division which is far from stacked with talent anyway. But in beating two of Rousey's friends and manufacturing drama, Correia created a narrative and a reason for Rousey to fight her. This was aided by taking place at a time when the UFC has basically admitted desperation and announced that Miesha Tate gets a third crack at Rousey despite never looking like she had anything for the champion in the previous two meetings. Really we should be applauding Bethe Correia for getting the world interested in a fight which was absolutely awful on paper, and was preceded by three hours of largely uninteresting match ups.

Now, I don't mind this talk of Rousey being the greatest pound-for-pound talent in MMA because pound-for-pound is a tool used to sell fights to the gullible anyway. It's the assertions that she could beat many male mixed martial artists which hurt my brain. The folks who believe this always fall back on the same airy, nebulous notions of technique overcoming strength and size. Of course, they never actually reference what 'technique' they're talking about. They're not always as hilarious as this—this is hopefully just a fantastic troll.

The truth is that not only is there the usual strength and athleticism divide between the male and female divisions of the sport—the technical proficiency in women's MMA is, for now, considerably lower. Put Rousey in with a top 25 fighter in any male division and she'd get lit up. Even if she carried her same brilliance into a clinch with stronger individuals—she only has one way of getting there, running straight forwards and eating blows. As we discussed at length in Killing the Queen, Rousey is not a methodical, pressuring ring cutter like Chris Weidman or Cain Velasquez, and she doesn't have to be because the women she fights will trade right hands ineffectually as soon as she gets close, thereby giving her the clinch.

Shinya Aoki, Andre Galvao, Joe Warren, Frank Mir, Demian Maia, Satoshi Ishii—all splendid grapplers from BJJ black belts to Olympic medalists, and all fighters who have lost bouts not because their grappling game fell short, but because they never managed to get there. If you want a clinch against a quality opponent who moves his feet and wants to avoid it, you have to make the clinch happened by cutting the cage, or you need to kickbox into your shots like Georges St. Pierre, or back-step and duck in a la Chad Mendes. There's a handful of ways to make a clinch happen against a savvy, mobile opponent and we've seen none of them Rousey because she hasn't had to.

And if you want to some inkling how well wading in and trading punches with most top-50 male fighters would go for Rousey, feel free to check out Lucia Rjiker, one of the most accomplished female boxers and kickboxers in history, going a little too hard in her exhibition bout against Somchai Jaidee. Jaidee laid her out in an uncomfortable spectacle which underlined why we don't sanction actual fights between men and women, and then went on to achieve nothing much in the grand scheme of things.

Technique overcoming strength only happens if you know something the other guy doesn't. If you plan to eat punches to get to a clinch, that ain't some Helio Gracie, reinventing-the-wheel level genius.

Here's the crux of the issue: it's not sexist to acknowledge that in the vast majority of athletic pursuits, female athletes are at a disadvantage when matched directly against male ones. Those who are actually for equality in sports are those who are willing to watch both men and women without the need to go through daft cross-sex, cross-weight hypotheticals to make it interesting. But then, no knowledgeable fan of tennis or athletics is pretending that Serena Williams or Shelly-Ann Fraser-Pryce could go head-to-head with their male counterparts and win. I suspect that the widespread ignorance of how fighting actually works is responsible for popularity of the Rousey versus men question.

Now having said all of that, Ronda Rousey is absolutely sublime—she's got the best clinch game in women's mixed martial arts, one of the most polished arm bars in the sport which she can find seemingly from anywhere, she's worked religiously to become a power puncher in an area of the sport where there are not many, and she's not even looked troubled by her opposition to date. To need ridiculous talk of a match with men, or even with Floyd Mayweather (and yes, that is still coming up every few weeks on major sports websites) to stay excited really just insults Rousey's tremendous accomplishments in her field. 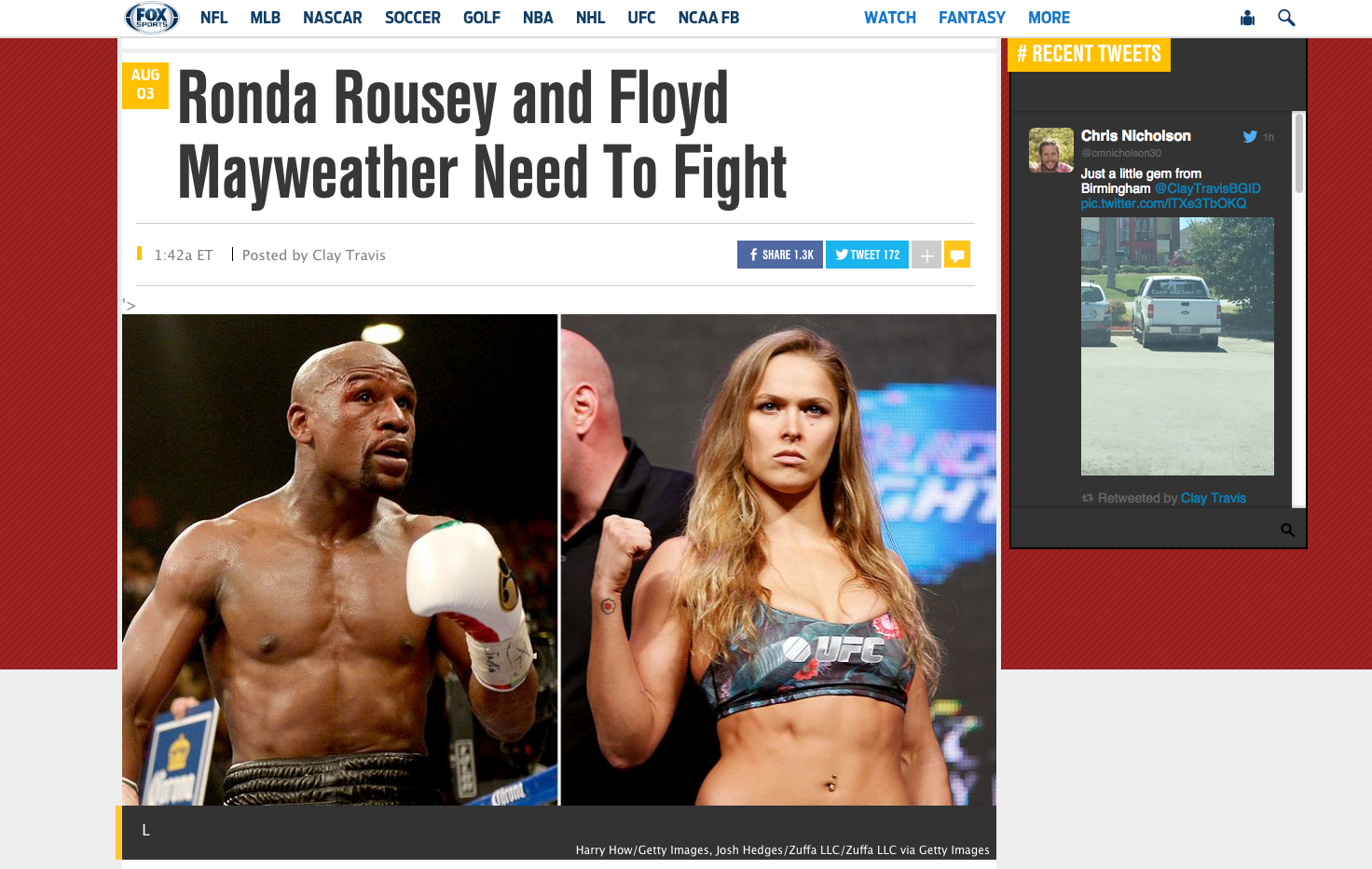 Yes, the technical and strategic standard in women's MMA is generally lower, but it's only been in the UFC for a few years and it's coming along well. For now, appreciate Rousey for what she is, a decade ahead of her competition.

Teix it to the Limit

You might have heard that former light heavyweight title challenger, Glover Teixeira, and hot prospect, Ovince St. Preux are fighting this weekend. What you might not have heard is how the UFC's marketing department have chosen to get the fans interested in this one:

Yes, Glover Teixeira took Jon Jones “to the limit”. Past the point of no return, reached the top but still he had to learn how to keep it. All the while failing to hit Jones with anything substantial and missing the same overhand time after time. Glover Teixeira absolutely proved that he's as tough as nails, because Jones beat him from pillar to post, but when you say “took him to the limit” to most people, they don't think “survived to the final bell and lost a convincing, lop-sided decision”.

What you might also have noticed in that promo is that Ovince St. Preux hit Mauricio Rua hard enough to change both the color of Rua's shorts, and the race of the referee. Those of us who remember the OSP – Rua bout will understand why, the finish was not pretty and didn't lead us so much to the conclusion that OSP was a stunning power puncher, as it did to the conclusion that Shogun Rua was a shell of his former self.

As a fan, you should probably be watching this card anyway. Teixeira is one note—throwing the same cross counter at every opportunity—but he's a good test for the up-and-coming OSP, who might well be the next big thing. Furthermore, you've got Michael Johnson and Beneil Dariush meeting up in what probably should be the main event, and guys like Uriah Hall, Tom Watson, Sam Alvey, and Chris Camozzi on the card. It'll be fun and it'll be free.

That doesn't make the misleading attempts to sell the main event any less laughable though.

Finally this week, I am becoming a connoisseur of appallingly impractical martial arts techniques, to the point that I now spend far too much of my down time in the evenings working out which Google searches will make me angriest. “[Traditional martial art] versus takedown” is good for hours of laughs on its own. Through this method I was able to discover my new favorite youtube channel, CombatantDVD.

One of the saddest points about traditional martial arts is that the practitioners of each will often take it as the answer to all issues. Yes, there are some traditional forms which contain old fashioned defenses against tackles—no they will not save you in this age where everyone and their mum knows that the ground fight is king. Want to learn to stop a takedown? Train a little with a wrestler. Thousands of years of wrestling tradition has made the best counters to the shot rise to the top, and the garbage fall by the wayside.

Giving your opponent both of your legs, keeping your center of gravity stationary, and trying to downward elbow or machine gun punch him into the floor, before he provides the small amount of thrust necessary to move your center of gravity past your base and topple you over, is about the stupidest response you can have to a takedown attempt.

But I have to give CombatantDVD points for business savvy. The moment Rousimar Palhares was out of the UFC, World Series of Fighting jumped on him, free agency doesn't last long for top names in this sport. In fact WSOF did the same thing with cutman, Stitch Duran. But CombatantDVD was even quicker off the mark this time—it didn't even make it into the news that the UFC on Fox robots had been given the boot before CombatantDVD picked them up. Though it is sad to see how far the Ultimate Fighting robots have fallen:

That concludes our jaunt through the dumbest things I've seen in MMA / martial arts this week. Eyes on Fightland for episode two of Jack Slack's Ringcraft.