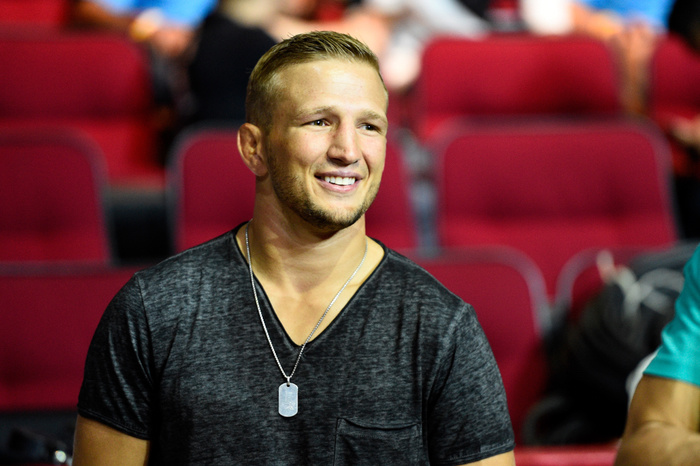 The MMA media claims that the UFC has over-reached with its events schedule almost weekly. The number of shows it is running throughout the year often leaves us feeling as though we haven't had time to absorb the result of one fight before we're on to being told that the next is even more important. The year is a blur of cut and paste promos only swapping who is the 'pound-for-pound greatest fighter on the planet'. But whenever we experience a break of a few weeks between fights I wonder how we ever coped in the days of one event per month. Since Cormier and Gustafsson's tear up all the way back on the third of October, the UFC has been absent from our screens and, spare a so-so Glory card, so has everything else. To manage the shortfall in programming the MMA community has fallen back on what it always loved most about this sport: school yard gossip.

First came news of T.J. Dillashaw leaving Team Alpha Male to work with Duane Ludwig at the new Elevation team. Repetition of Conor McGregor's 'snake in the grass' remark abounds, and it is every bit as sad as any other time fans attempt to mimic the trash talking of their heroes. At this point the MMA community at large is beginning to look like the kind of fan who turns up to a Q&A in Vegas just to beg for approval from their favorite fighter by slagging off another.

Interviews with Urijah Faber had Duane Ludwig looking like a bad guy, interviews with Ludwig had him seeming erratic but not evil, and interviews with T.J. Dillashaw had him looking like his usual self and confused as to why everyone was so upset. So why is it necessary to have an opinion on this matter which we will never have a full, impartial understanding of? Because there's sod all else going on.

It's exactly the same reason that we are all—I am told—fascinated by Ronda Rousey's choice to date Travis Browne. I suppose it is interesting in a 1950s holier than thou kind of way because Browne is technically still married, but more because Rousey has done everything in her power to ride Floyd Mayweather's coattails while condemning his record of domestic violence, and has since begun dating a man accused more recently of the same crime. Cyborg Santos had some rather astute observations on Rousey's record of hypocrisy over body image bullying earlier in the week which might well be worth your time if you like drama. Browne, of course, has not been found guilty of beating his wife in any court of law but again it's romantic drama in the absence of any drama in the cage and it's only got to last the community a week so no-one really cares either way.

Does it matter if T.J. Dillashaw misled Urijah Faber, or if he kept the awkward conversation over leaving until he was actually sure he was? Would it matter if Ronda Rousey was a massive hypocrite? No, not one bit. Unless you are one of that subset of people who I still struggle to believe exist: the group that thinks that twenty-something year olds who get punched in the head for a living have some kind of duty to be moral compasses for the rest of us.

It's that same damn theme we come back to over and over and over again. You can find someone inspirational or appreciate their artistry in one walk of life without condoning or even needing to judge their behavior in another. My favorite book is The Fight by Norman Mailer but I'm not going to stab my wife in the chest with a pen knife in hopes of being more like him. I think that Jack Blackburn created beautiful boxers like no one else in the game but that doesn't mean I approve of him gunning down three people. I won't find many to argue against my belief that Martin Luther King was a force for good in the world but I also won't find many to condone plagiarizing your dissertation or cheating on your wife. While all of those other actions are pretty reprehensible, they are also not counter arguments to Mailer being a good writer, Blackburn being a good trainer, or King being a good civil rights leader. And unless I were stupid enough to attempt to emulate the good and the bad of my influences and inspirations those enormous, glaring character flaws don't even need to be mentioned alongside those accomplishments.

To recall the phrase of the great Pedro Rizzo: Runners run, swimmers swim, fighters fight. To even bother judging them on anything else—except using their abilities to violently beat someone outside of the ring—is not worth anyone's time. To judge them on their romantic engagements, their business decisions, or the awkward conversations and fallouts they have with friends simply because the MMA community has hours of scheduled online broadcasting to fill might just be the silliest thing about this entire sport.

On a lighter note, I'd like to take a minute to discuss a theme which will be readily apparent to you if you like to keep your mind open to traditional martial arts. Incorporating classical moves in the cage has become a great way to get an edge, but the knowledge doesn't always flow both ways. Often when you see traditional martial arts styles incorporating elements of modern grappling they seem to have missed key points. Here our Wing Chun man performs a couple of armbars with the leg behind the head—workable in certain situations and leg configurations, but of course if there is nothing holding the opponent's upper body down, the arm isn't going to be isolated as you attempt to bridge up into it. You will see Buchecha and others playing with many different leg configurations, but never one that allows the opponent to just roll up into their guard as if the armbar were never attempted. Here the upper body is free to move, squirm, sit up, or slide over the top leg.

Everything about this video and so many others stinks of an instructor being asked by students how to deal with a grappler, and then attempting to make up some responses without actually knowing how the techniques work or trying them against a resisting opponent. In fact, the trailer even boasts that the techniques on the tape are from this system and did not come from studying other systems—as if refusing to study the thing you're training for is somehow admirable. At the end of the trailer our man describes how his anti-grappling Wing Chun works because of the footwork, all the while standing right on top of the guy and punching down at him, pretty much giving the tackle to anyone who wasn't worried about upsetting their sifu.

I am reminded of that 'anti-Gracie' pressure point technique we looked at the other week. A conclusion that no-one could possibly have come to if they trained with even the slightest bit of resistance or effort out of the attacking partner.

This is the popular trend of 'anti-grappling'. People who don't like the idea of grappling want a traditional martial arts answer to it. Some have claimed to find it while others like Sifu Freddie Lee have accepted they can't and have resorted to homophobic slurs instead.

If you're stuck for stuff to do this week, turn off your google alerts for Ronda Rousey and instead watch this beautiful train wreck.

I occasionally have cause to term a fighter an 'anti-boxer' or 'anti-technician' because they utilize unorthodox techniques which confuse or exploit the arsenal of a textbook fighter. Think Jersey Joe Walcott or Emanuel Augustus. But each of those men came to find exploits in the traditional boxing arsenal by sparring rounds and rounds against it—they were also very skilled boxers in their own right. To develop anti-grappling techniques without studying the grappling arts is just a hopeless task in hypotheticals one hopes never to test. To see real anti-grappling watch Jose Aldo feeding single legs or hopping to the fence to prop himself up, or Chuck Liddell using the cage wall to walk himself back to the feet, or B.J. Penn having a stand up from seemingly anywhere on the bottom.

Every major advance in the MMA or BJJ meta up to this point has been made through trial and error. A lot of that is done by finding the techniques that trouble a fighter or prove successful for another and reverse engineering them—finding out how to hinder plans and deny opportunities. That is something learned through practice and live sparring, not through a cursory glance through a book or video and saying “I reckon my Wing Chun has an answer to that”. I know I don't want guys thinking that you can fight your way out of a rear naked choke by trying to toe hold your man in 2015. Nobody wants that.

“Because really, he's fallen right into my trap...”