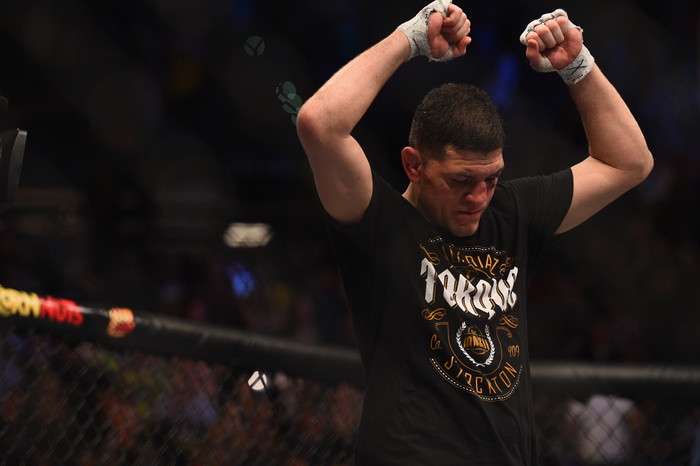 My Wushu Watch column is normally devoted to calling out some of the dumbest ideas I've heard in MMA and martial arts through the week, but the subject of this weeks column is a solid contender for “Stupidest Thing to Happen in MMA in 2015”.

Yesterday the Nevada State Athletic Commission brought an abrupt close to the career of the great welterweight, Nick Diaz. The fallout was tremendous as fighters, fans and journalists took to social media to condemn the verdict, and it is safe to say that in its grand tradition of poorly thought out actions, this is among the commission's worst.

Now I don't believe that anyone in their right mind is in doubt as to whether Diaz could have used a banned substance in the recent past. The man is a weed fanatic by anyone's definition. The outrage is due to three main factors.

The first is that Nick Diaz's legal team put together a very solid case, hinging around the fact that Diaz's positive test was sandwiched between two negative tests, and all three were taken just hours apart. The first and third test were performed by WADA—the World Anti-Doping Agency, while the second was performed by Quest Diagnostics. Diaz's representatives argued that the Quest Diagnostics sample was the only test which did not remain anonymous, and was sent off unsealed to the lab. Furthermore, Quest never tested their second sample from Diaz. To this, all the commission seemed to have to say was that they have always worked with Quest, as if that somehow affected the validity of this individual test. Simply put, one or more of the tests had to be wrong whether Diaz was clean or not.

The second reason for disgust is that while the judgment passed on Nick Diaz hinged mostly around this questionable second test—with the commission arguing that as Diaz didn't disclose he had used marijuana, thereby lying on his pre-fight questionnaire—much of it also seemed to be swayed by Diaz utilizing his constitutionally guaranteed right to remain silent. Diaz's legal team and the commission disagreed over the meaning of this in a civil proceeding, but Diaz's refusal to speak for himself was referenced numerous times as the commission was justifying its decision to punish Diaz.

The third and probably most significant factor that is cheesing off most followers of the sport is that this is marijuana we're talking about. This is an age where almost all of your athletic heroes can be linked to a proven performance enhancing drug user by one degree of separation through shared a training camp or a coach, and in which we have to steer further and further into deliberate naivety to pretend any sporting pursuit is “all on the level”. Is marijuana really a legitimate concern in sports? In the week that the Nevada State Athletic Commission was dragged over hot coals for not appearing to do anything about Floyd Mayweather's use of an illegal IV and suspicious testosterone-to-epitesterone levels, are we actually going to eliminate a fighter's final athletic years and cite his disregard for procedure as justification for the stern punishment? And let's not even talk about the lesser suspension that Anderson Silva received for using actual performance enhancing drugs in preparation for the same fight, or the fact that Chael Sonnen only received a two year ban after testing positive for the second time in his career, this time on a cocktail of HGH, EPO, and HcG.

But then perhaps the time I have spent writing for Vice has made me rather laissez-faire regarding other people's recreational drug use and I just haven't noticed my inner hipster blooming. What I do know is that with the amount of injuries MMA fighters accumulate, most reasonably informed pundits in the community would rather see fighters enjoy some recreational weed as a pain manager than go the way of poor Mark Kerr or Karo Parisyan, throwing away their athletic primes to prescription painkiller abuse.

And honestly, most professional fighters fall into one of two groupings. They are either near broke and deluding themselves into thinking they're still going to win the world title and make the big bucks (which the vast, vast majority of them will never come close to), or have already made it, have more money than they know what to do with and no foresight on how badly tax is going to chew them up as soon as their fighting career ends. (Coincidentally, these are the same reasons they cannot get together and organize a union of some kind to protect themselves.) If you are looking to these people to provide a rounded and wholesome role model for your children just because they excel in an athletic pursuit, maybe it's time to grow up.

Nick Diaz has always been a divisive figure in the MMA community, largely due to the fact that more than any other fighter his followers are reluctant to acknowledge a loss. Like Roberto Duran, he oozes machismo almost to a fault. Absolutely fearless, he'd lay down in front of Anderson Silva, and wave in the hitting power of Robbie Lawler. But equally, if an opponent moved away, he'd follow and eat strikes, doing little to cut the ring and improve his odds in the long run. But to me, that's what makes the fight game. We embrace the fighter for his abilities and his flaws both. Pretending that your favorites, or even the world champions, are unbeatable gets stale pretty quickly.

Throughout Diaz's career there was constant talk of him being the best boxer in MMA and I was always being asked to weigh in on that notion. The truth is, of course, that 'best boxer' is a lot like 'best artist'... if art includes painting, sculpting, drawing, music, poetry, writing, and any other creative pursuit. No-one can do it all, not even close. But while Diaz's ringcraft, footwork, and head movement were all lacking, his A-game was a terrifying prospect.

Ringcraft was always a big issue for Diaz, who did his best work along the fence.

Few men could ever be said to 'punch a marathon', but Diaz did it in every fight. He put the pace on opponents, but in a peculiarly slow way. He didn't set off at a hundred miles an hour, and his punches seemingly came at half speed, yet by the end of the second round he'd have nearly two hundred strikes thrown. It seemed to surprise his opponents too. One minute they'd be winning the exchanges, the next they'd be two rounds in the hole and barely able to leave their stool due to exhaustion.

What Diaz did so wonderfully was work in volume—but unlike a Michael Bisping or Gokhan Saki, he wasn't just playing the odds that some would get through, he was laser accurate. Some men have an instinct for slicing up an opponent like a side of beef. Diaz would find the floating ribs, the kidneys, the solar plexus, and he'd do it in seven punch flurries.

Furthermore, he'd always have one arm pulling down on the back of the neck, or pinning the opponent's arm in their guard. Watching Diaz put together rallies against the fence remains one of the greatest joys I have experienced in this sport—sublime shot selection, adaptation and control throughout, and the embodiment of that old dynamic between go and ju, hard and soft. The changes in tempo and in power, this is a master at work in his field.

Nick Diaz seemed to defy some of the accepted truths of MMA. “Can't go for body punches when you're in a double collar tie, you'll get kneed in the face.” Nick Diaz obviously hadn't heard that one, because he'd march forward and put himself in the double collar tie, only to shrug, crossface, and whack away at his opponent's midriff. Even Anderson Silva was letting go of double collar ties moments after he'd slapped them on a significantly undersized Nick Diaz.

For me, warts-and-all was the way to enjoy Diaz, the glorious ball of contradictions that he was. But even then, only the most cautious men got past him, Diaz was nigh unbeatable in a brawl. And even though he spent the majority of his career outside of the UFC, carrying Scott Coker's Strikeforce promotion by beating a streak of B-listers, and his record in the UFC isn't a stellar one, he got in the cage with both Anderson Silva and Georges St. Pierre—two of the outright best ever in two different weight classes—and made both look downright timid to engage for twenty five minutes a piece.

While Diaz had clearly fallen out of love with the sport in recent years, taking just three fights since 2012 and abruptly retiring whenever he lost, this still seems like an odd way to end. It's like Arrested Development being cancelled before the conclusion—it's not what it used to be, but I was still sort of invested in it.

But a ban in Nevada is not the be all and end all of anything. The UFC has given Diaz preferential treatment before because of his tremendous appeal and his capacity for making excellent fights. While it seems unlikely that the UFC would let him out of any contractual commitments he has to them, it would be nice to see the UFC help Diaz out financially by finding him a fight overseas. Especially knowing that Diaz intends to fight the NSAC's ruling in court (and damn right, he should). Hell, they're desperate for headliners to interest the Japanese market and Diaz already has a following over there. Japan is famously not picky regarding its fighters' pasts, having let Tommy Morrison box 'one last fight' long after he had tested positive for HIV.

Whatever the case, it's been a wonderful start to the week for stupidity, but not such a great one for Mr. Diaz.

Return of The Spider: Silva's Science Proves Too Much for Diaz's Grit