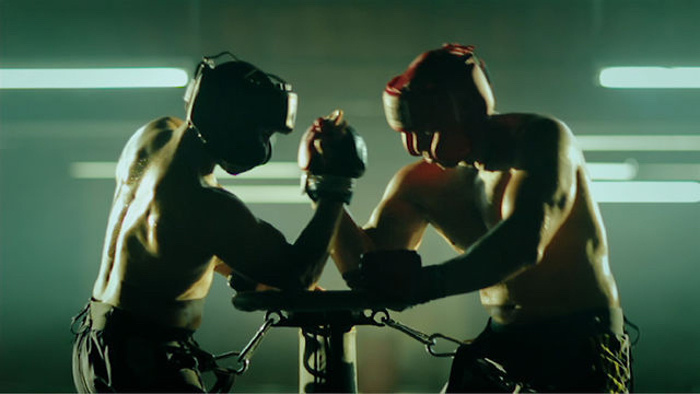 The Desperate Search for a Unique Selling Point

I survived the YAMMA. YAMMA Pit Fighting, the greatest show on earth. On the eleventh of April 2008 the co-founder of the UFC, Bob Meyrowytz launched his groundbreaking new take on MMA with a one night heavyweight tournament and a couple of supposed super fights between busted up old timers. What was supposed to make YAMMA special was that bouts were to be fought in the YAMMA pit. It was the usual circular cage, but with a slight incline from about a meter and a half off of the fence. The thinking was that fighting would be done on two levels and supposedly it would make the classic wall 'n' stall and lay 'n' pray strategies more difficult.

It seemed as though the folks at YAMMA never actually had anyone train in the pit to test this. It turned out that this incline made it far easier for the man inside the guard to drive his weight into the bottom player and hold him in place and he incline up to the fence made wall walking far more difficult than with the right angle between cage and floor. Then YAMMA brass picked B and C tier heavyweights and predominantly wrestlers seemingly to demonstrate that the pit would make fights more exciting. “Featuring Ricco Rodriguez” was not an alluring tag line even in 2008. Finally, and worst of all, because it is almost impossible to get a true one night tournament sanctioned in the U.S. (as World Series of Fighting recently discovered) the first two bouts of the heavyweight tournament were only one five-minute round. Travis Wiuff asserted that all he needed was two takedowns to get to the last round, and he and Chris Tuchscherer both demonstrated this flaw in the rules and pit over four lackluster fights on the way to the final.

The pit served to eliminate wall 'n' stall by forcing the man along the fence to back track upwards. Numerous times over the evening men were pushed to the fence and their legs were easily scooped out. But the pit also stopped these fighters from getting up. Takedowns were inevitable, and the ground game was made almost static: the worst possible outcome.

As an interesting aside, a young Oleksiy Oliynyk scored one of his bizarre gi-less ezekiel chokes in the first round of the YAMMA tournament. Twenty-five vitories later and now in the UFC, Oliynyk seems to be the only quality talent to have survived the YAMMA. But part of that was deliberate, YAMMA decided to focus on the nostalgia market, introducing a 'masters' division and booking numerous superfights. Don Frye, Butterbean, Mark Kerr and Oleg Taktarov were all booked to fight, and all came in looking to be in awful condition and just hoping to pick up a check spare Frye who pulled out and was replaced by a forty-five year old Patrick Smith.

Watching old timers bulge over their shorts as hundreds of their fans hope for a one night return to the form of a decade ago is tragic but it is a promotional mainstay. Promoters know that you will pay for the guys you used to like rather than form new unknowns on the off chance you enjoy it. It's why the UFC can still headline events with Dan Henderson, Shogun Rua and either Nogueira if they want to, and it's why they keep guys like Takenori Gomi on the roster just to preent Japanese promotions from having his name to sell tickets. It's why Fedor, half a decade removed from a meaningful victory, is still such a commodity. Bellator has a roster of legitimately talented fighters at most weights, but it is putting most of its focus—under Scott Coker, who became enamored with this silliness when Tito Ortiz and Stephan Bonnar was surprisingly successful—into these kind of 'masters division' fights. Those fights that most of us would call freak shows.

But abusing old men and making the cage more stalling friendly are not the most heinous attempts to appear unique you will see in fight promotion. No, there's plenty of others. One which springs to mind immediately is the sport / league of X-arm. Another original member of UFC brass, Art Davie, once again proved that the brilliance of the original UFC was in its simplicity, not in the creativity of its founders. Davie wanted to bring the sport of arm wrestling into the MMA age.

Two competitors link hands with their elbow firmly on a table, their hands are bound to each other, and then the other hand is free to swing away. In the X-arm boot camp video segments this led to awesome jumping double knee strikes while using the table as a post. In reality the sport was just two guys swinging wild and a ton of sub ten second stoppages. With the elbow allowed to come off the table whenever the fighters wanted to just pick it up, the arm wrestling element was pointless. With the table in place and each fighter assigned a position, footwork was removed and subsequently all the means through which a real quality fighter will control the timing of blows and exchanges.

The only way to make this fun would have been to remove all pretense that there was arm wrestling involved, take away the table, allow the fighters to move, and just lash the two guys together for a yapipi indian strap match.

And I'm not going to touch Shock Fights with a ten foot pole. If it ever gets off the ground someone will die, and then you can be damn sure it will be reported as an MMA fight.

But the newest contender for the title of dumbest MMA gimmick has got to be Team Fighting Championship. TFC hosts five-on-five MMA bouts in a gigantic ring and it just doesn't work. The referees have no idea how to even begin policing the action and in fact get in the way of it. None of the competitors use their names or want the bouts on their records, instead taking Gladiators-like nicknames and some even wear masks. It's difficult to watch. Particularly when one team comes out rocking the Wing Chun guards: 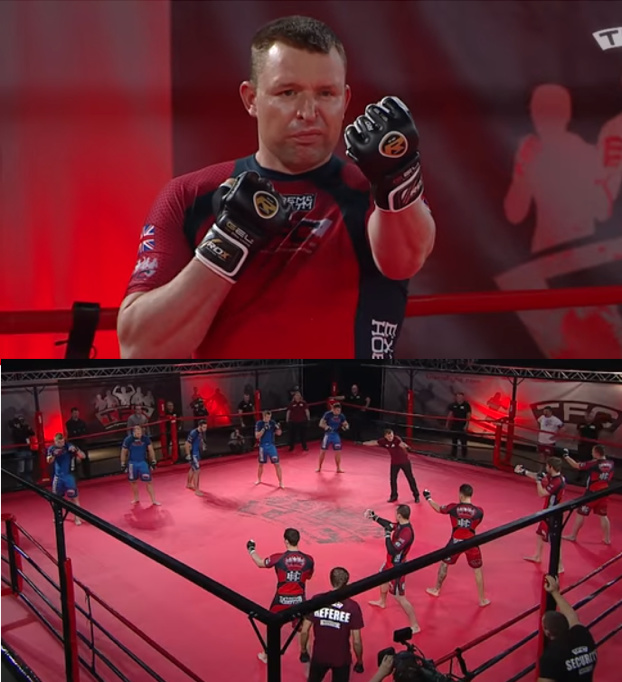 And here's the thing, I watched through all three of their cards and I cannot recall a single time that the winning team didn't finish the bout without losing a single fighter. Why is it so lopsided? Because as soon as one person is eliminated, the guy who eliminated him can run over and start beating the snot out of another member of the opposite team two-on-one. Nothing you do has an effect on the outcome of the fight unless you are the first guy to finish your opponent. You could be putting on a clinic, mount a guy, and because some scrub on your team got tapped with a guillotine in the opening seconds you are suddenly being punted in the back of the head from nowhere. Oh and soccer kicks, downward elbows and strikes to the back of the head are all legal. They just work much better when your teammate is already holding someone down. And to deal with the problem which doesn't occur in normal MMA: that of unconscious bodies getting in the way of further fighting, the refs will just drag limp fighters out by an arm. You know, that method which dislocates shoulders in a way that easily identifies whether a body has been dragged at a crime scene.

“Over 'ere Charlie, no over there!”

Most hilarious is the tale of the tape when they deem it necessary to show it. You will quickly notice that the Polish and Latvian teams have three fighters weighing over 100kgs, all in good shape (there's no drug testing by the way), and that the Swedish team have zero natural heavyweights. Even amid this fever of McGregor fuelled “weight doesn't matter” talk, you should already know what is going to happen.

I want you to guess who won this fight. The folks at TFC even included a handy team average for each side.

The best part of the match is the beginning as fighters realize they don't want to fight the guy they are in front of and run behind their team mate to take a softer target.

What makes it even weirder is the number of guys attempting to heel hook their opponents from the get go. Sure, a heel hook is awesome if you can snap it on fast, but Garry Tonon these guys are not. They wind up in leg entanglements and then it's just a case of waiting to see whose team mate gets free to come and soccer kick who in the face first.

Team MMA can be a thing and the IFL's approach to this was pretty enjoyable. You have a camp of fighters train together and you have a different fighter represent the camp at each weight in a series of fights. But five-on-five MMA just turns into a gang beatdown after the first elimination. The secret for success in TFC seems to be really streamlining training and just focusing on swinging hard from the start and guillotining the guy if ever there is an opportunity, then work on running around putting in soccer kicks when necessary.

In the search to be original, to have that unique selling point, fight promotions often ask “what could make MMA better?” The problem is that by trying to strip away elements of MMA that you don't like, you remove much of the skill from the game. And by adding extra elements you can often overcomplicate it. With two men of equal weight the opportunities must be created and exploited. In five-on-five, anything goes fights you have to hope that someone on their team stumbles into a guillotine before someone on your team does. The agency is gone, the science has been replaced with clumsy rushing rather than urgency and now we're just in a bar fight.

You might not like the slower bouts in traditional MMA but that's what makes it so special when a guy comes along who can't be laid upon or held against the fence. The search for alternatives is just cheap and ultimately provides little of the joy you would expect on paper.