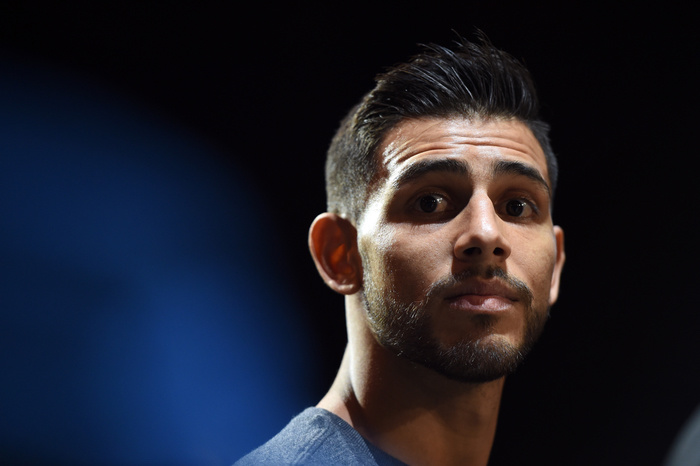 Yair Rodriguez is exactly what the UFC wants: a star to get them into Mexico. We all remember how hard they pushed Cain Velasquez as the first Mexican heavyweight champion. Velasquez had a whole card booked around him in Mexico City at UFC 180, before he pulled out injured. The UFC wouldn't let it die though and booked UFC 188 in Mexico City as well. Where Velasquez famously arrived in the city later than his opponent, spoke the language worse than his opponent, failed to acclimatize and then performed badly, losing his title in the process. But why is Mexico such a big deal? Well, Mexico is one of boxing's biggest demographics. The nation has produced hundreds, if not thousands, of elite professional and amateur boxers from the Z-boys to Canelo Alvarez to Julio Cesar Chavez. Boxing is truly part of the culture. If the UFC could get even twenty percent of the Mexican boxing demographic to buy UFC Pay-Per-Views regularly they would be raking in a hefty sum.

Yair Rodriguez fought his way into the Ultimate Fighting Championship through The Ultimate Fighter: Latin America, the final of which took place at that ill-fated first event in Mexico City, UFC 180. Rodriguez was booked into the prelims when Cain Velasquez made it to Mexico at UFC 188 and with his leaping kicks Rodriguez was able to steal the show. His jumping low-high switch kick which briefly stumbled Dan Hooker was the talk of the MMA community the next morning. He then proceeded to almost throw up in the post fight interview because the UFC keeps booking events at altitude and being surprised when the fighters look a little sluggish. This weekend, at one of the most overlooked cards in recent UFC history, Rodriguez is main eventing against 'Bruce Leeroy', Alex Caceres.

Rodriguez is beloved by fans, as Tony Ferguson is, for being something of a wild man. He has a ton of technical skills and he understands the game but he will often throw positional strategy out of the window just to try something that might end up on a highlight reel. Though he caught Andre Fili with a beautiful jumping switch kick in his most recent bout, the Taekwondistador spent much of that fight leaping at air and falling to the mat when he missed. The main criticism you can make of Rodriguez is that he works at a mile a minute and his ADHD brand of striking gives up on the traps before they have even been adequately set. A Rodriguez fight is fifteen minutes of gorgeous set ups which make you think “why didn't that work?”

The reason is that when a fighter is setting up a strike he is trying to use the reactions of the opponent. We touched on this in the first episode of my brand new podcast. If you want a guy to be cautious, throw a lot of different feints. But if you want him to react to something, show that one technique a lot. Really drive the idea into the ground. It is like writing a school or university essay: you might think it's a bit on the nose to keep explicitly relating your content to the title but subtlety doesn't check the boxes. If you want an opponent to bite on a set up, you have to show it long enough for him to adjust to it. You aren't working at your speed, you're working at his speed.

Yair Rodriguez will show a creative pairing like a fake side kick into a spinning back elbow but he won't have shown the side kick in the last five minutes. Then it's on to some other completely different pairing, and then another. If the opponent never gets used to one repeated attack coming at him, he won't make adjustments to deal with it and open himself up. He will just shell up under the variety of attack, or immediately retreat out of range whenever he sees you doing anything.

You'll still score your points on him but you aren't going to have much luck knocking him out and that's clearly what Rodriguez wants to do. Repetition is a very important part of striking—variety for variety's sake is often counter productive.

And on the couple of occasions when Rodriguez has stayed southpaw for a while and thrown out a few of those low line side kicks to get the opponent biting on them, he's been able to score with the set ups. There's nothing wrong with the set ups at all, it's the patience that Rodriguez is lacking.  This takedown attempt as his opponent raised his knee to deal with the side kick, for instance, was a beauty.

As an aside, Yoshihiro Akiyama with some side kicks could have been a monster...

Perhaps that is what is most intriguing about this weekend's fight with Alex Caceres: both men can throw a great arsenal of different strikes, both are willing to try exciting and new things, but both men also do not really have a systematic method of going about things. There is no commitment to faster, longer, lesser strikes to get in after and build upon them later. It is bombs from the outset and changing plan completely when they don't stick. In Caceres this is especially noticeable because he has a tremendously long frame for his weight but does next to nothing with his reach advantage. In many ways reminding me of Cyril Diabate—being a long striker with the game of a normal striker, rather than developing his game to reflect his build.

Where Rodriguez has been excelling in recent fights is in his counters to takedowns. He's a passable wrestler but gets taken down a fair amount. Rodriguez does immediately begin attacking off his back though, whether it is with an armbar or his favorite triangle.

Against Charles Rosa, Rodriguez even performed a version of the old Roleta sweep which you will remember Cole Miller also used a couple of years back.

Rodriguez's big problem is the same as many traditional martial arts style kickers: he uses a lot of space and often loses track of where he is in the cage. Consequently he gets caught along the cage a good deal. This can lead to him eating good punches or being taken down more easily.

Alex Caceres and Yair Rodriguez might have a frustrating match up of flipping kicks which achieve nothing, or one might elevate himself above the other by fighting a little more methodically. Either way the two are a good test for each other with where they are in their respective careers. A victory for Rodriguez means a recognizable name on his record. A victory for Caceres says he might be ready to start putting together the wins more consistently. Caceres might begin to recognize his considerable potential which would be good because while Rodriguez has years of fighting ahead of him, it's getting tough to keep calling the 28-year-old Caceres with his 14 UFC appearances a 'young prospect'.