Yuri Foreman, the Fighting Rabbi, Returns to Boxing Next Month 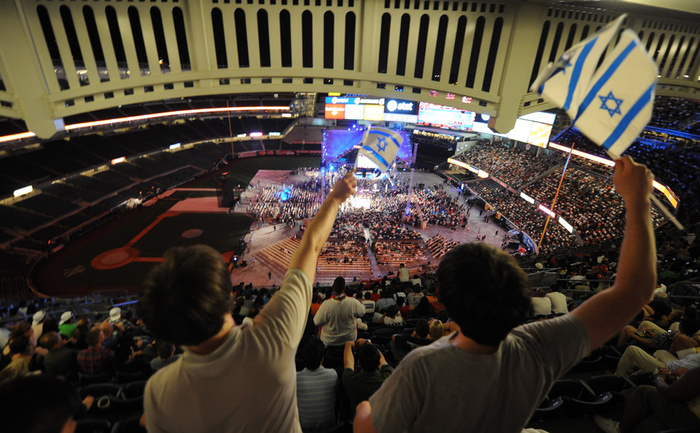 Six months earlier the 29-year-old boxer was a world champion. At the MGM Grand in Las Vegas, he had beaten Daniel Santos to claim the WBA super welterweight belt, becoming the first-ever Israeli WBA champion and the first Orthodox Jewish boxing champion since Barney Ross hung up his gloves in 1938. Foreman, already married to a Hungarian model, had the world on a string.

Then on June 5, 2010, in his first title defense, in his adopted hometown of New York City, in the first boxing event held at the new Yankees Stadium, no less, things fell apart. In the seventh round, Foreman aggravated a lingering knee injury, leaving him essentially fighting on one leg. He was a sitting duck, favoring his one good leg and getting battered by Puerto Rican great Miguel Cotto. Foreman’s manager threw in the towel in the eighth, and even though Foreman convinced the referee to let the fight continue the result was a foregone conclusion. Barely able to stand, the champion was battered in the eighth round and the referee was forced to call a halt to the bout just 42 seconds into the ninth.

Surgery to repair a torn ACL and meniscus forced Foreman out of the ring for nearly a year. In his return fight against Pawel Wotak in March 2011, Foreman retired in the sixth round. After a brief but triumphant four-fight return two years later, Foreman officially called it quits on boxing in May 2014 and turned his attention to other dreams. Namely, becoming a rabbi.

Boxing Hall of Fame inductee Barney Ross’ father wanted his son to become a rabbi. He raised Barney to be a Talmudic scholar in the rough-and-tumble world of inner-city Chicago in the early 1900s, but Ross renounced his faith after his father was shot and killed by two men while they were robbing the family’s grocery store. Ross’ mother subsequently had a nervous breakdown and the family was split up, with Ross’ youngest siblings getting sent to an orphanage. Ross, then just Dov-Ber Daniel Rasofysky and only 14 years old, took his anger out on the world, becoming a thief and a street-brawler. He made friends with local gangsters like Jack Ruby and eventually worked for Al Capone. He took up boxing with the hope of earning enough money to buy a home and reunite his family.

This week news came down that after two years away from boxing, after two years wandering in the wilderness of domesticity and Talmudic study, Yuri Foreman will return to the ring December 5th at the Barclay’s Center on Flatbush Avenue, a five-minute walk from Foreman’s home in downtown Brooklyn and just a few subway stops away from Gleason’s Gym, where he first trained after arriving in Brooklyn from Israel in the late 90s, a green kid with aspirations to greatness and very little English.

In addition to being older and wiser, Foreman will enter his return bout as an official rabbi, the result of a decade of study under DovBer Pinson, a Jewish mystic living in Brooklyn.

Foreman first met Pinson in 2005, at a low point in his life.  “I was struggling financially,” Foreman said. “I was feeling the challenges in boxing and with my money situation and my desire to be a good provider for my wife. I realized that I needed to become stronger spiritually so I could become stronger physically.”

At Pinson’s invitation Foreman started studying to become a Chabad rabbi in 2006.

“The study of Judaism is like a bottomless well for me,” Foreman said. “It has made me like a tree that grows for years and finally gives fruit. For all of my life, this was inside me. Now it comes out.”

Chabad is an intellectual and spiritual wing of Orthodox Judaism that dates back 240 years. Adherents of Chabad follow ancient esoteric traditions like the Kabbalah, a school of thought known for parsing every word, letter, and accent symbol in Jewish texts for hidden, spiritual messages. They also believe in reaching out to non-observant Jews with the goal of committing them to Orthodox observance, thereby speeding up the return of the messiah, and that all Jews and all gentiles need to know about the seven Noahide Laws, which are similar to the 10 Commandments but which, oddly, prohibit the eating of live animals.

Pinson, one of Chabad’s foremost scholars, is the author of 20 books, including Reincarnation and Judaism, The Garden of Paradox, and Exploring a Boys First Haircut and the Spiritual Nature of Hair.

Between 1901 and 1938, when Barney Ross retired from the ring, there were no fewer than 26 Jewish world champion boxers. Since then, Yuri Foreman and a couple of others aside, there have been almost none. As legendary trainer Ray Arcel once said, “Punching people in the head isn’t the highest aspiration of the Jewish people.”

One of the last Jewish champions before Foreman was Mike “The Kosher Butcher” Rossman, a light-heavyweight from Turnersville, New Jersey, whose mother was Jewish and whose father was Italian. Bucking longstanding tradition, Rossman decided to fight under his mother’s maiden name. “My mother’s a Jew,” Rossman said after he won the belt in 1978. “And in the Jewish religion, whatever your mother is, that’s what you is.”

Before his return fight on December 5th Rabbi Yuri Foreman says he will pick up his old routine of studying the Talmud, the holy book of Jewish commentary and interpretation, before putting on his gloves.

"Boxing is sometimes spiritual in its own way," Foreman says. "You have the physical and mental challenges in boxing, just like you have lots of challenges in exploring the different levels of Judaism. They are different but the same."