Jeff Harder is a writer who lives a couple miles from the ocean, serves eggs to his dog almost every morning, and has a decent arm-in guillotine. Great. 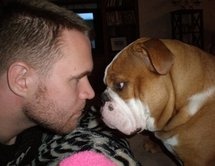