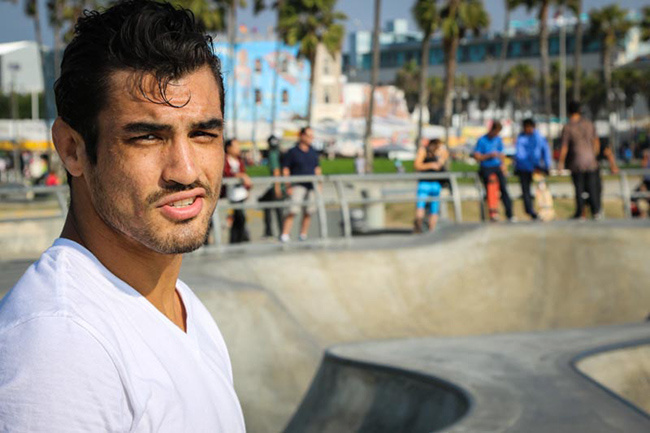 “I’m losing the match. I am doing everything I can to survive. I put my life into escaping. I finally escape and I look over at my Dad and I ask him how much time is left. He says, ‘One minute,’ and I can feel in the way he said it he was so disappointed--like, ‘Oh, you fucking idiot, how could you let this happen to you?’

“So I’m like, ‘Okay.’ I had been training a lot of one-minute drills. So in my mind one minute is a long time. I drilled for hours where I have a fresh guy come in every minute for months. I’m going nuts--I pass his guard and I get his back. I look over at the score. I thought it was 3-3, but it was 6-3; I didn’t know he had gotten the back points twice. So I’m going for the choke, he’s defending well. I’m like, ‘I’m not going to stop, I’m not going to stop.’ I squeezed with everything I had left. He tapped out with three seconds left on the clock.

“So that was my first day.”
– Kron Gracie

Kron Gracie just got back from Beijing, where he won his division in the Abu Dhabi Combat Club (ADCC) finals, the most prestigious grappling tournament in the world. He submitted all his opponents, a feat only a few have ever achieved. A few days later he was back in Santa Monica, California, ready to get back to his first passion: skating.

“My first love was skateboarding,” Kron says when he picks me up in his blue vintage Ford Bronco and we head to the famous Venice Beach bowl. “I got decent when I was 10. I had little skate shop sponsors, but I was never really good like the kids my age who were in the magazines. They were twice as good as me. If I was ollie-ing an 11-stair, they were ollie-ing 20 stairs."

Kron drops in as soon as we arrive. As I fumble around with my camera he lands a few tricks and falls (rather gracefully) a couple of times. “Nobody has ever taken pictures of me skating before,” he says grinning. Kron is good-looking and charismatic enough to seem famous to those outside of the fighting world. In fact, the skatepark is the only place in town where he doesn't appear to know everyone, and the pro skaters seem a little confused as to why a B-level skater is getting his photo taken.

"I miss skating so much," Kron says. "Sunday is the only day I skate. I need something to release my stress, something to enjoy. I do so many things for my profession that I need to release the pressure that builds up. I usually skate on a little street cruiser. You saw how I do those little slides--it helps me stay calmer. It makes me come back on Monday stronger. I will be so refreshed because I had fun and it had nothing to do with jiu-jitsu, nothing to do with training my body to get better, just letting loose. It’s always a risk. But that risk is what I like. I like the fact if I go too hard I could get hurt and fuck my life up.

“I hurt my wrist two months before ADCC. I was at the half-pipe just killing it. I’m grinding like, ‘Woo, I got this shit,’ and just when I thought I was doing good and tried to stick it, I fell on my wrist. I thought I had broken it. I was thinking, ‘Fuck, my dad is going to be so mad.’” 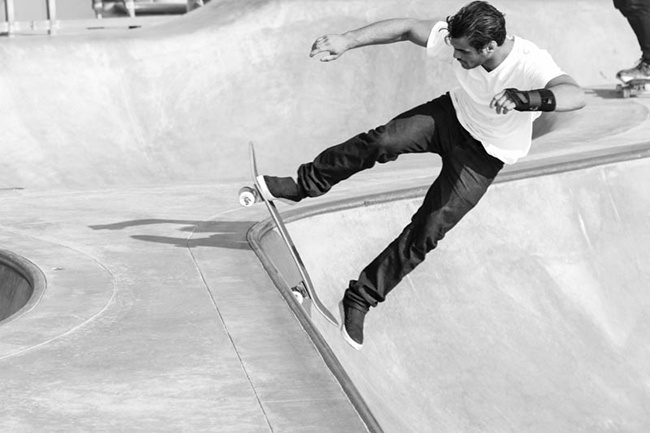 Kron’s dad is Rickson Gracie, a world-renowned mixed martial artist and trailblazer in the sport. Rickson is considered by some to be the most dominant jiu-jitsu fighter in the whole Gracie family, and he made his name proving the effectiveness of the art in open-weight exhibition matches in Brazil. After moving to California in 1989, Rickson and his brothers’ Los Angeles academy became the center of the rapidly expanding Gracie jiu-jitsu universe.

“I was here when my Dad had his first academy in a shitty building next to an auto body shop,” Kron says. “It was so smelly. The UFC had just started, so it was only people that wanted to learn how to fight to defend themselves on the street. And that was it. There was no fandom. It wasn’t bougie, and nobody was trying to sell jiu-jitsu to you. There were no franchises or market for it. At that time there was no other competition.

“I grew up when it was the most real it could possibly be. And that’s how I try to keep it now. I keep it real, cause that’s what I believe in, and that’s what I believe is right. I’ve been working so hard to prove that my dad’s jiu-jitsu is the best and my image is the same. But what people don’t know is that I’ve only put my gi on with my dad under 100 times. I’ve been on my own since I was 17. My dad only taught me when I was very young.” 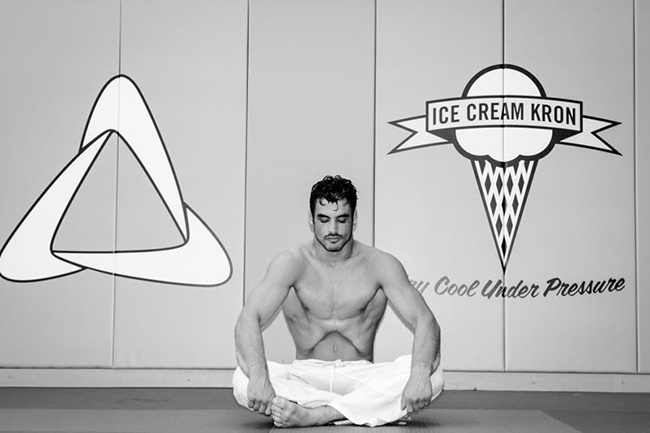 Kron’s older brother Rockson was tough, outgoing, and outrageous. As a teenager he tattooed his last name across the back of his head and “21st Century Warrior” on his shoulders. Kron was more of a surf-kid and more passively set himself to training and competing in jiu-jitsu tournaments alongside his brother. When Rockson passed away in 2000 Rickson went into seclusion and Kron put down his skateboard to focus on stepping into the role of the next great hard-nosed Gracie.

"By the age of 12 I had broken each of my ankles twice [skating]," Kron says. "That’s when my brother told me that whatever I do, I should do it 100 percent, whether it’s being a skater or a doctor--don’t take it lightly. He said I am lucky enough to have access to the best jiu-jitsu family, the best jiu-jitsu father, and the best academy. It would be stupid for me not to take advantage of it. But he ended the conversation by telling me I could do whatever I wanted. I listened, but then when he passed away I felt like it was my mission to do what he wanted.“ 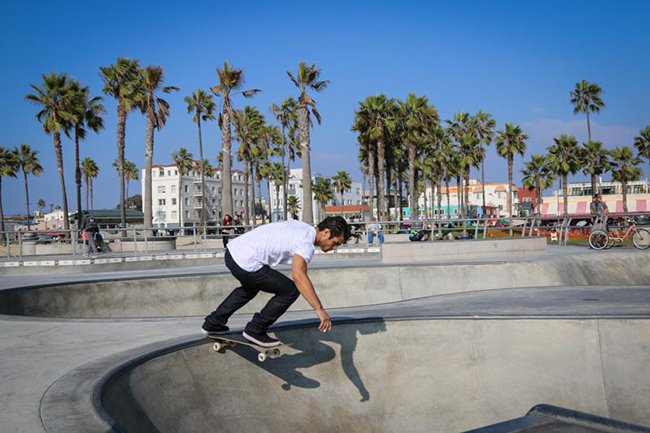 Like his father before him, Kron is a polarizing personality in the grappling world. Even as a kid at BJJ tournaments, he had that garage-academy vibe. He is way more hip-hop than his cousins. His attitude echoes the young and wild Rickson of yore.

Still, Kron says for years he felt little but resentment for his father, who left his mother when Kron was still young.

“My mom and my dad have had a tough marriage and he stuck with it for the kids, until he thought I was ready to be on my own. Right when he felt that moment, he left,” Kron says. “It was literally overnight and he was like, ‘Well I’m outta here and I’m going back to Brazil.’ I was decent at jiu-jitsu at the time but I was still just a kid. I was really upset. I was thinking that he should be here supporting me and teaching me lessons and doing all these things for me and making sure my hip movements were right. I had nobody to turn to. All I had were my students and my training partners. So I just trained. Up until last year I had resentment. He could have made me so much better!”

Kron looks out over the beach. “But then it just clicked for me: My dad is not ever going to be my coach again,” he says. “I was still expecting him to come train with me before Worlds every year. He would call me and be like, ‘Oh I’ll come train.’ He would show up a week before, say, ‘Whatsup’ to me, disappear, and then show up right at the time of my fight.

“A year ago, right before the first Metamoris, he told me he was going to show up and train. He showed up again right at my fight, and we sat next to each other. And you know, at that time I had resentment towards him because I was thinking, ‘You told me you would show up three weeks before my fight like always and you didn’t.’ But that’s not what mattered. All that mattered was that he’s sitting there right then. I started thinking about my brother and I started crying, and then we both started crying. Nobody said a word. It was very spiritual. He continued not to say anything to me, and I went into fight. I won and I realized it has nothing to do with jiu-jitsu anymore, you know? He’s just my father. I can’t expect him to be my coach. So now, every time he comes into town, I don’t even ask him to train. I don’t even ask him questions about jiu-jitsu. And since then, he’s come down and helped me train and he shows up! It’s very weird.

"Now I think that leaving me at such an early age was his way to make me a man and let me do it all my own way. Now, at 25 I feel like I’m so much more than I would have been. As soon as I was on my own and I had to fight for myself, I started to win. I have a responsibility and obligation to compete and represent my father and grandfather. That’s owed. I can’t just live off my family’s name. I don’t feel like that’s right. I could just run my academy and sell merchandise, and I could just do seminars and stuff. I could have done that six years ago, after I was already kind of good at BJJ. I have to give back and that means attempting to keep my family name alive.

"My dad always told me to be a warrior, to fight for what I believe in. That’s where my foundation comes from." 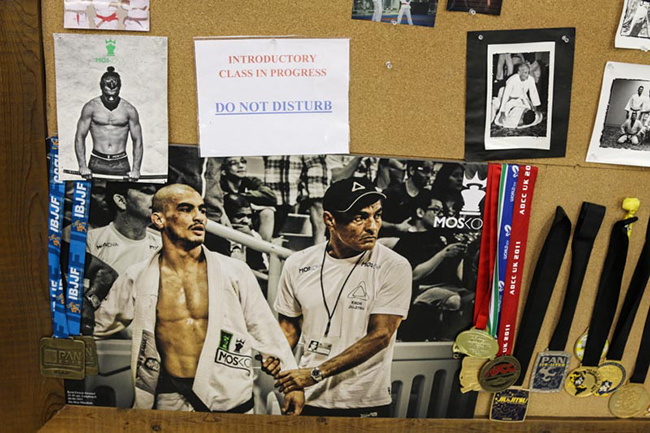 While we sit there on the Venice boardwalk, watching skaters run through their repertoires, I ask Kron if he thought he would have chosen to be a professional fighter if his brother were still alive.

“I don’t think so,” he replies. “I just know at the moment, I picked jiu-jitsu over skating. Maybe if he was doing really well I would train, but I don’t know, man--maybe it would have pushed me away.

"Nobody knows what would have happened to me if my brother were still here. But his spirit is still here and that’s what drives me.”