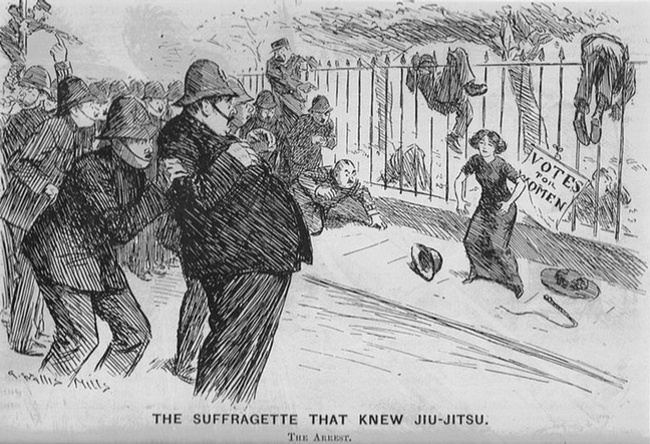 The list of things given to the human race by Queen Victoria’s London is long and, like a letter to Santa written by Wednesday Addams, largely grim. Jack the Ripper was just the tip of the world-trashing iceberg. The modern police force, the tabloid press, the workhouse and the concentration camp are just a few of the nasties that oozed out of the era. Sorry to break it to you, British Empire fans—Victorian London may have seen itself as the ‘heart of civilization’ but it was more like the un-wiped arsehole of the world, shitting all over the face of the future.

There is, however, one tiny source of pride that emerges from this maelstrom of malice. Victorian London—perhaps inevitably, since the city stretched its claws halfway around the globe—was also the birthplace of the first mixed martial art, and home to some of the original Ultimate Fighters.

A whole technological revolution before Royce Gracie cemented the superiority of his family’s style of jiu jitsu by slaying the giant Shamrock at the first UFC, Edward Barton-Wright, a colonial engineer, was shocking and impressing London society in equal measure with his new combat system, which he called ‘Bartitsu’. His martial art combined jiu jitsu, Savate, bare-knuckle boxing and street fighting techniques to create a style which, in Barton-Wright’s own words, ‘should enable a man to defy anything.’ 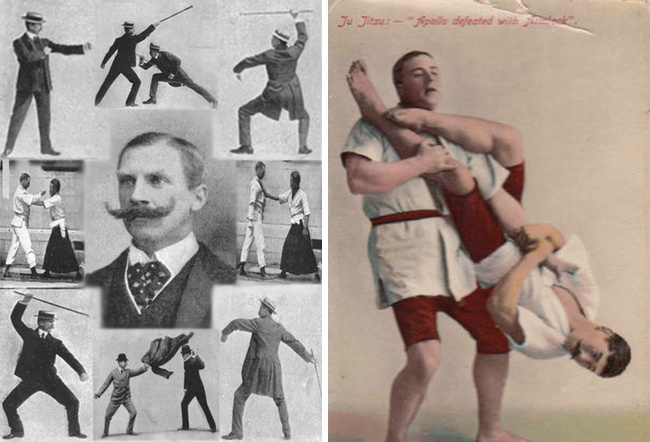 Like Gracie, Barton-Wright was a slight, unassuming man. Which must have made it all the more galling for the professional pugilists and wrestlers at St. James Hall in London when, fresh off the boat from Japan, he strode into their hangout and challenged the whole lot of them to a fight. ‘I overcame seven in succession in three minutes,’ he recalled in an interview given shortly before his death. ‘All,’ he added with satisfaction, ‘were fourteen stone.’

When Barton-Wright arrived in London at the end of the nineteenth century the city was in the grip of a mighty panic, thanks largely to the efforts of the nascent tabloid press. The Ripper had made such good copy that they decided to fill the back-alleys of London with a hundred more like him. Garrotters, Thugs, Footpads, and Scuttlers loomed menacingly from the front pages, put there by cynical newspaper editors hoping to part gullible readers from their money, and it was this wave of fear that Barton-Wright hoped would bear him all the way to the bank.

Bartitsu was never meant for popular consumption and, sadly, with the exception of a few public spectacles, it never really made it into the ring. Barton-Wright may have been the first mixed martial artist, but he was also an arch capitalist. More interesting to him than the creation of a new sport was the prospect of using his system to tease open the purse strings of the upper classes. He pitched Bartitsu to the cash-splashing man-about-town who longed to be able to swagger through the East End in a silk top hat without having to worry about having his teeth kicked in. With techniques that demonstrated how to fend off armed assailants with nothing but an opera cape, walking stick, and ‘the superior intelligence of the better classes’, Barton-Wright promised them all this and more. 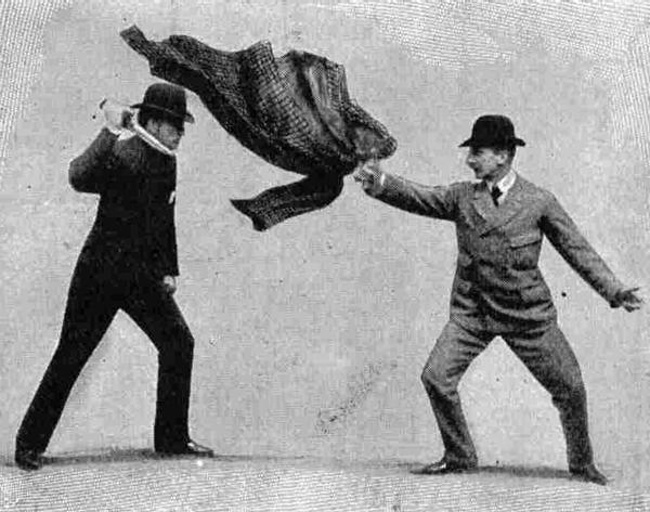 With a little clever PR—and a few words of encouragement from the Prince Regent—he had soon generated enough interest from the moneyed classes to establish the Bartitsu Academy of Arms and Physical Culture in the heart of Soho. The Academy was lush—one visitor described it as “a huge subterranean hall, all glittering, white-tiled walls, and electric light, with ‘champions’ prowling around it like tigers”—and entry was only for the few.

Barton-Wright filled the Academy with state-of-the-art equipment, and, like any decent MMA club, had specialists in each form of fighting brought in from around the world. This is where the true significance of Bartitsu in the story of European martial arts emerges. Teaching alongside Pierre Vigny, master of la canne—walking-stick combat—and Armand Cherpillod, an expert in the Swiss style of wrestling known as Svingen, were Yukio Tani and Sadakazu Uyenishi, the first Japanese jiu-jitsuka to teach in Western Europe, and the founders of jiu jitsu and Judo in Britain.

While Barton-Wright was handy in a scrap, Tani and Uyenishi were the stuff of legend. In an early exhibition fight one of the pair—the record is unclear as to which one—faced a wrestler who went by name of Klemsky the Russian. As was usual in the slightly murky underworld of Victorian showmanship, ‘Klemsky’ was in fact an English wrestler and performer more commonly known as ‘The Man They Could Not Hang’—named after one of his most famous acts, which involved him surviving a fifteen-foot drop from the gallows with a noose around his neck.

Before the fight Klemsky had boasted that his neck was so strong he would be impossible to submit. Considering how many times he had relied on its strength to cheat death, the audience was not surprised when, finding himself caught in a choke by the Japanese fighter, he simply turned to the crowd and grinned.

It was then, one witness recalled, that ‘the Japanese wrestler’s eyes gleamed with malice. He rolled across the ground past the Russian and to increase the force of pressure on the neck, planted his two feet in the pit of Klemsky’s stomach. This tightened the grip so extremely that a net of blood escaped from the mouth of Klemsky and sprinkled his face.’ Thinking him dead, the audience let loose howls of rage. These rapidly changed to gasps of wonder when the Japanese fighter returned to the ring and stood over the apparently lifeless corpse of his former adversary, gently massaging his neck he miraculously returned the wrestler to consciousness. When asked what he thought of the fight, Klemsky reported that he could remember only ‘the sound of bells’. 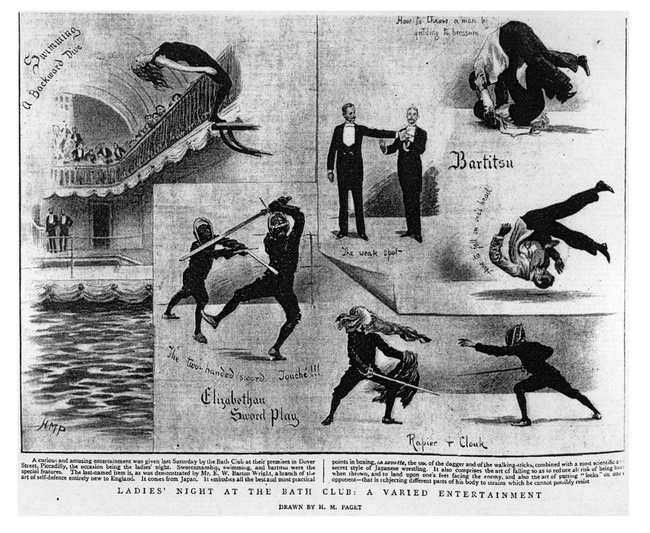 While jiu jitsu’s reputation was quickly established, few of London’s elite bothered to join the Bartitsu Academy. Barton-Wright was not one for self-reflection so he leaves few clues as why that might have been. But perhaps the fact that the Victorian upper classes had the entire Establishment ready to back them up and, when it came down to it, preferred to use their wallets, rather than their fists, to keep themselves out of danger might have had something to do with it. Sir Cosmo Duff Gordon, a one-time student of the Academy, would go on to lend this theory some weight when he emerged from the wreckage of the Titanic as one of a handful of male survivors. Although it was never conclusively proven at the time, critics claimed that his secret to success had been to bribe the crew of a lifeboat to take him on board and row full speed ahead, never mind the cries of the people in the water to either side, begging for rescue.

Whatever the true reason, the Academy was forced to close down after just a few years. After a lifetime spent battling obscurity, Barton-Wright finally gave in and was buried, penniless, in an unmarked grave—a victim of his own greed perhaps.

While Barton-Wright slowly faded from sight, his original idea—that the law would not always be there to protect you, and that jiu jitsu was the solution—took on a life of its own, and produced one of the greatest fighters of the era in the process. 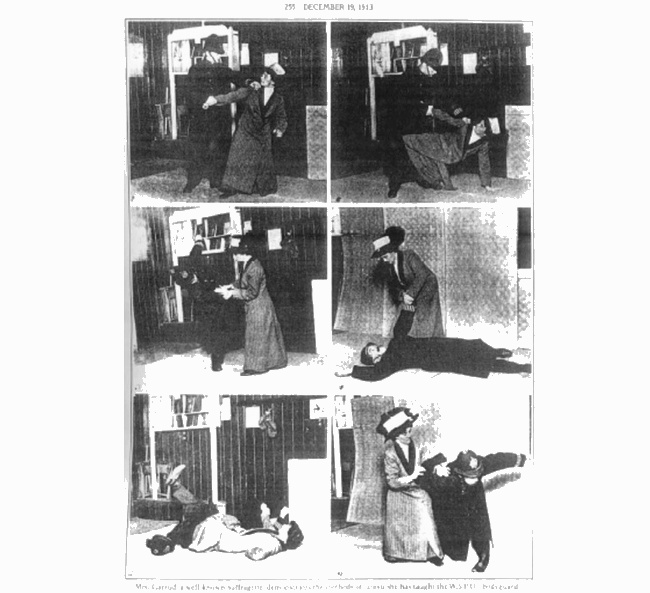 Standing just 4’11’’ high, a martial art that enabled the weak to overcome the strong must have been particularly appealing to Edith Garrud. Along with her husband she was one of Barton-Wright’s first pupils and, when the Academy shut down, they followed Uyenishi to his new dojo around the corner, eventually taking over from him when he returned to Japan.

Unlike gentlemen of the era, British women could not count on the protection of the law. In fact, at the time the British Government was conducting increasingly violent attacks against one group—the suffragettes—who were campaigning for women to be given the right to vote. Police routinely broke up their meetings with truncheons and arrested and imprisoned their leaders who, when they responded with hunger strikes, were subjected to force-feeding, and worse.

Garrud’s response was to open the doors of her dojo to the suffragettes and take jiu jitsu out into the streets. Up until the start of WWI she trained an elite group of suffragettes, know as The Bodyguard, whose mission it was to match the violence of the police and prevent their leaders from being arrested. 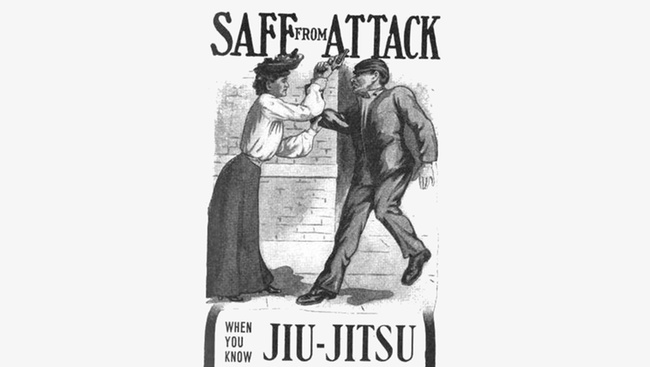 Garrud herself was rarely allowed to join them—for fear, the leadership claimed, that ‘she might carelessly hurt a policeman if he were rough with her’—but the few occasions on which she disobeyed orders show that in both craftiness and skill she was more than a match for anyone.

In an interview given in 1965 she recounts being told by a policeman that she was creating an “obstruction” during a demonstration and would have to move along: ‘Pretending, in a ladylike gesture, to drop my handkerchief, I threw him over my shoulder and slipped away into the crowd.’

Any men that doubted her ability were soon made to regret it. One Daily Mail journalist who scoffed at her claims was invited to try to lay hands on her and was shocked to find that he was thrown every time. He crawled from the room a wiser and sadder man.

Another policeman, seeing the size of her, challenged her to throw him.

‘Up shot one of her feet to meet his diaphragm,’ reported one journalist who was present. ‘Her little arms strained, and as he pulled against himself the man lost his balance, swirled over her head, turned a somersault in mid-air, and fell heavily on the back of his head. In less than ten seconds the Suffragette had thrown the policeman.’

While Barton-Wright defeated seven fourteen stone fighters in three minutes—possibly by bullshitting them to death—and Tani and Uyenishi choked out The Man They Could Not Hang, Edith Garrud faced down the most colossal opponent of all—the state—and, thanks at least in part to jiu jitsu, eventually won.

Check out another story by Charlie Gilmour:

Outlaws and Ancient Gods: Fighting the Law with the Champions of Mjölnir